Celebrating a year of British Success 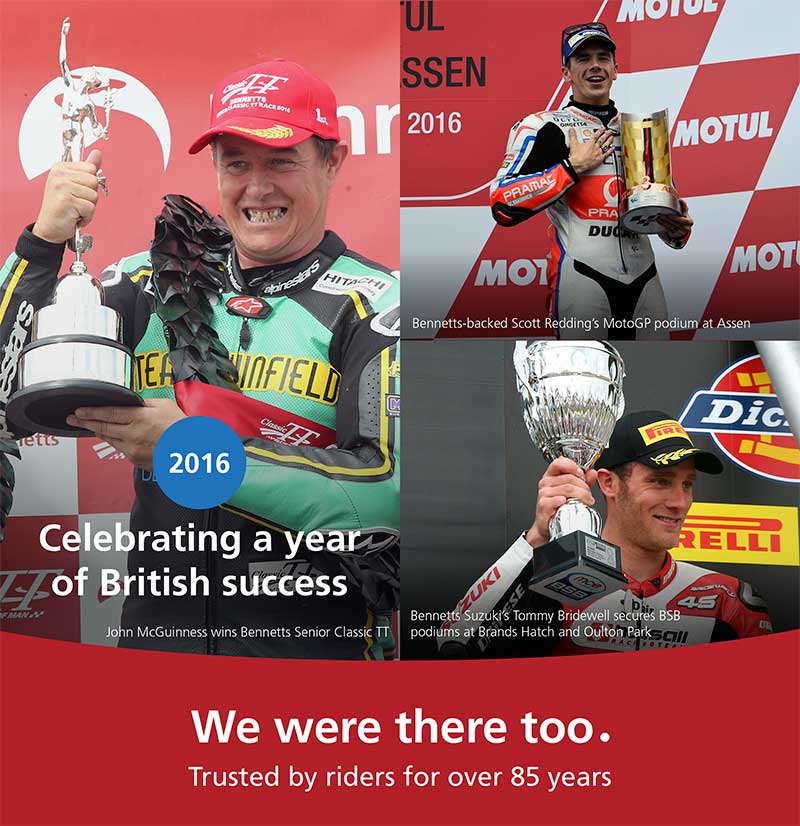 Founded in 1930, Bennetts has been there to witness some of the most extraordinary performances in motorsport over the last 85 years, including Sheene’s domination of the Grand Prix in 1979, Mike Hailwood’s iconic comeback in the Isle of Man TT after an 11-year absence and the cut-throat Yahama Pro-Am series of the 80s.

As this year’s motorsport season comes to an end, we reflect on some British racing success in 2016.

After three years of disappointment, John McGuinness claimed his first Classic TT victory in the Bennetts Senior Classic TT race. The Morecambe rider shattered the lap record on the Team Winfield Paton to win by over twenty seconds - adding to his success on the Mountain Course where he has 23 TT wins under his belt and more TT podium finishes than any other rider.

In the British Superbike Championship, our season highlight was Tommy Bridewell’s first podium finish of the season after he finished third in the opening race at Brands Hatch on the Bennetts Suzuki. The Bolton-based Halsall Racing team also took the GSX-R1000 to another podium at Oulton Park – and we can’t forget the livery from Brands Hatch that celebrated 40 years since Barry Sheene’s first world championship title.

Bennetts has supported MotoGP star, Scott Redding since his days in Moto2 and before he went on to be the youngest Brit to win a Grand Prix in any class.  At the Dutch GP this year, he secured his second MotoGP podium after a tricky start to the season that had saw him secure two top ten finishes, but also finish outside the points twice and record three DNFs.

Looking to our stars of the future, we’re looking forward to seeing Rory Skinner compete again in the Red Bull Rookies and FIM CEV Moto3 Junior World Championship in 2017.