Bridewell on podium at Brands Hatch 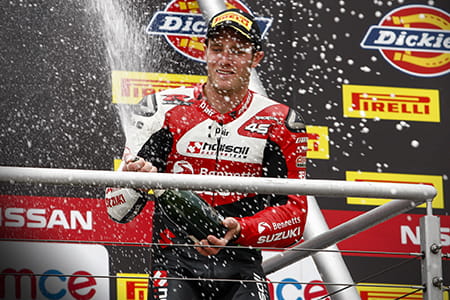 Tommy Bridewell took his and the Bennetts Suzuki team’s first podium finish of the season after he finished third in the opening race at Brands Hatch, at today's third round of the British Superbike Championship.

Starting from the second row of the grid, Bridewell pushed through to fourth place in the opening stages and escaped with the front-runners. He moved his way up to the third place before progressing to second, with his sights set on the win.

Unfortunately he relinquished second place on the last lap, but crossed the line in third to take his first podium finish of 2016.

Race two saw the Wiltshire-born rider again start from the second row, before he finished the 30-lap race in fourth place, capping a solid weekend for him and the team and kickstarting his season, as he moved into ninth in the championship.

Tommy Bridewell, “It feels good to get that first podium of the season, especially after the start we had and some of the bad luck we've suffered. I felt really confident coming into the weekend. We had the test at Anglesey, which was positive for us, and I've known all along that the potential was there in both the team and the GSX-R1000. It's still a competitive package. I knew we shouldn't be down in the positions we were in at the first two rounds, and here we've been up the sharp end all weekend and fast in every session. I felt very comfortable in the first race and it was good to be at the front. In race two we had a small issue with rear grip; it dropped off a lot earlier in the race than it had in race one, which meant I couldn't maintain my pace. It was a shame to miss out on another podium, but it's done our championship position a lot of good. We've got the Snetterton test next, and I fully expect the same sort of performance at Knock hill.”

Martin Halsall, Bennetts Suzuki Team Owner, “Tommy had the speed all weekend to challenge at the front, and the podium in race one is the result of the hard work that he and everyone in the team has been putting in. It feels great to get that first one of the season and also our first as a team with the big Suzuki. We didn’t have the best start to the season, but we knew the potential of Tommy and the package we had, and it was just a case of getting some small issues ironed and out getting the rub of the green. In race two we didn’t quite have the pace to get back onto the podium, but it’s a weekend that’s really kickstarted Tommy’s season. We’ve got him up into the championship top-10, and now we can focus on fighting for more podiums and bridging the gap to the Showdown places. It’s still a bit of a bittersweet weekend however, as I think we could have had two GSX-R1000s fighting at the front this weekend, as Kiyonari had the pace in practice before crashing and fracturing his collarbone. But we’re sure he’ll be bounce back and be in the mix next time out.”