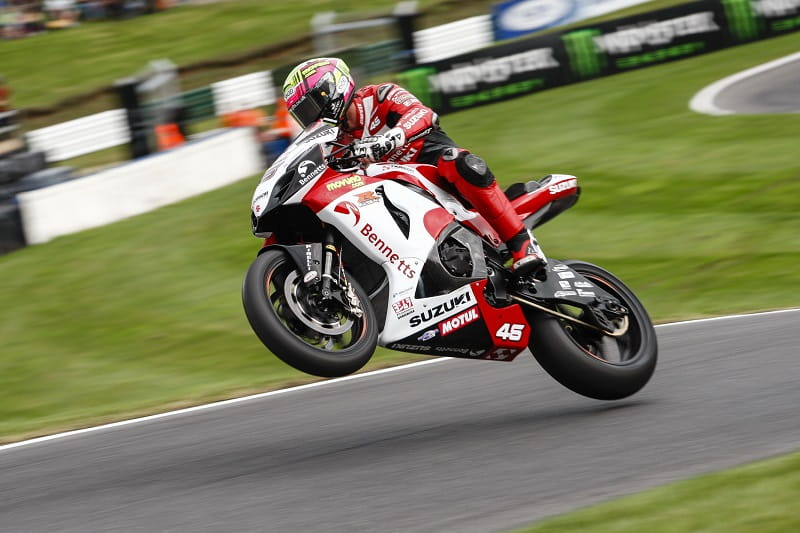 Tommy Bridewell will start from the third row of the grid for tomorrow’s opening race at Cadwell Park, setting the seventh fastest time on his Bennetts Suzuki in qualifying for round eight of the British Superbike championship.

After a sold start to the weekend, Bridewell ended the final free practice session fourth fastest, and was confident going into the opening qualifying session. Progressing from Q1 in second place, Bridewell set the third fastest time in the second qualifying session to advance to Q3.

The final session saw the pace increase, and with lap times between the nine riders fighting for pole incredibly tight, Bridewell managed to post the seventh fastest time to qualify on the third row.

Tommy Bridewell, “It’s been a good day today. It’s a bit of a bugger being 7th, but we’ve been improving all the time and we’re bang on the pace. Yesterday I hit a bit of a wall with lap times, so we made some changes for FP3 and, despite hitting traffic at the wrong moment, I felt better and went faster, so I knew we could be stronger in qualifying. The lap times we’re able to do around here are really fast. I’ve gone faster than I ever have done at Cadwell Park, which shows just how well the team and the big Suzuki are working, and I’m really happy with the progress we've made and how the bike feels. Hopefully we can have two good races tomorrow and get two strong results.”

Team Owner Martin Halsall, “We’re a little bit disappointed with being on the third row of the grid, as our pace is faster than seventh. But that’s the way it goes with three short qualifying sessions, and you have to be on it in every one. We started well yesterday, but have improved today. Today’s practice session showed that the changes we made to the Bennetts Suzuki were the right ones, and in qualifying we showed we can run at the very front. But with less than 10 minutes to post a time in Q3, it just didn’t quite come together. It’s going to be close out there tomorrow and it’s hard to pass around here, but we’ve got a job to do so it’ll be a case of trying to push through and get ourselves onto the podium.”