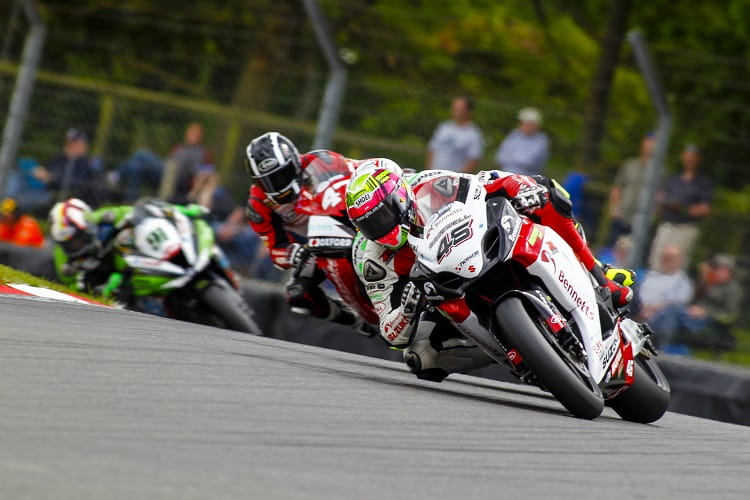 After qualifying on the front row, Bridewell opted for the harder rear tyre for both of the weekend’s races, knowing that the abrasive Thruxton asphalt and tyre life would come into play. In the opening race he rode with his head, keeping in touch with the podium battle while knowing that the race would come to him in the later stages.

Despite a red flag at the halfway stage, Bridewell still held the advantage of the harder rear tyre, with riders having to make the restart on the same tyres they started the race with. In the closing stages the local rider’s lap times were consistently faster than the riders in front, and he cut through the field to take fourth place at the chequered flag.

His teammate, Ryuichi Kiyonari, also benefitted from his tyre choice, and despite a mistake early on that dropped him to the back of the field, he was able to make his way forward, crossing the line in seventh place and narrowly missing out on fifth.

Both Bridewell and Kiyonari again opted for the harder tyre for race two, however, a delayed start because of the threatening rain saw the race distance cut to 18 laps. With a shortened race, both were unable to benefit in the same way as race one, and finished in eighth and 11th respectively.

Tommy Bridewell, “It’s been a good weekend. The team has worked really well, my Bennetts Suzuki has been great, and I enjoyed letting it hang out this weekend. We knew we were going to have two difficult races. Tyre life was always going to be a real factor. We tried the soft tyre in practice, and even though it’s worth at least half a second a lap, we couldn’t get it to go the distance. But you saw others struggling with it too, which is why the first race really came to us and I was able to just ride around people in the end. It was a shame the second race was cut. I know it was only two laps, but you could see how much the tyres dropped off. I could have made up about seven seconds in those two laps, which would have put us a lot further up the order. But it’s been a really positive weekend. I used the new swingarm that we tried in practice in the races, which worked really well. We’ve got a test coming up next to refine our setup, but I’m looking forward to Brands.”

Ryuichi Kiyonari, "This weekend was better for me. I had a good pace and the improvements to our setup made me feel good on the bike. The first race was good, and our tyre choice meant we were a lot faster at the end of the race. I was faster than those in front and I think if I had one more lap I would have had fifth, maybe even fourth from Tommy! It was close but seventh was good. The shortened second race meant we didn't have the time at the end of the race where the harder tyre would have given us an advantage, so it is a shame I could only take 11th, but overall it was a good weekend where we made some big progress.”

Team Owner, Martin Halsall, “It's a little bittersweet to be honest. I think all-in-all we have had a good weekend. The front row shows the raw pace we had. But at Thruxton pace isn't enough; so much is about tyre wear. We were happy with Tommy's fourth in race one, and also really happy to see Kiyo competitive again. If he hadn't had to come through the traffic, I think he could have been even further up the field in the end, and we could have had both riders in the top five.

"We were looking for more of the same in race two but the delayed start and the shortening of the race, although only two laps, did cost us as it was in those final laps where we had the advantage. Some riders' lap times were three, nearly four seconds slower than us in the end, and over two laps that's a big chunk of time that both Tommy and Kiyo could have made up on the riders in front, so we're actually disappointed with eighth and 11th because we could have been a lot higher. But, we have to look at the positives; we've bounced back from Snetterton, showed the pace we have, made some big improvements with the bike, and got both riders feeling happier with the big Suzuki. We've got two days' testing to make more steps, and then we'll look to improve again at Brands.”