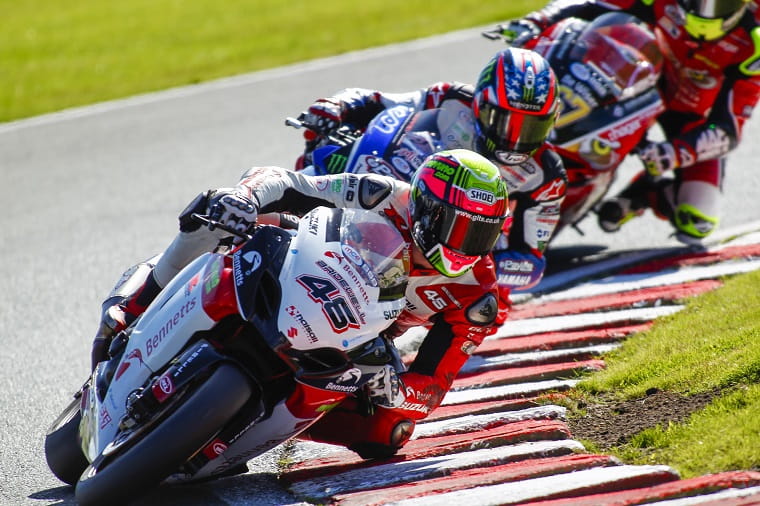 Tommy Bridewell bounced back in perfect fashion from the disappointment of crashing out of yesterday's opening race at Oulton Park, by racing his Bennetts Suzuki GSX-R1000 to third place in today's second race at the Cheshire circuit.

Bridewell, who arrived at round nine of the British Superbike championship still harbouring ambitions of a place in the series' Showdown, was unlucky to crash out of fourth place in the first of the weekend's three races after qualifying on the front row.

However, after a strong sixth placed finish in race two despite suffering the after effects of yesterday's crash, the Wiltshire rider raced to an impressive third place in the final race of the meeting, ending a frustrating weekend on a high note and further underlining the potential of the Bennetts Suzuki team and the GSX-R1000 package.

Tommy Bridewell, "We've had a bike capable of finishing on the podium in all three races this weekend to be honest, and it's credit to the team who have put so much effort in and built a brand new bike for today after yesterday's crash. It's been a real struggle for me on the bike today as I've been really sore and stiff. It was difficult to move around and difficult to get the bike to turn. I really struggled in the first race today but I was a little better in race two and a bit more relaxed, and it was good to give the team a podium after the effort they've put in. We're not in the Showdown, and now we can just enjoy riding our bike in every session before the end of the season, but I want to put the bike on the top step of the podium before the year's out."

Team owner, Martin Halsall, "That podium shows what we've been capable of all weekend. It's actually a little bittersweet because we had a chance of a place in the Showdown coming into this weekend, and we had the pace to beat many of our Showdown rivals. However, because of the crash, it's a bit of a case of what could have been. That said, we're delighted to end the weekend on such a high note, and the podium is a reward for everyone in the team for all of the hard work that's been put into making us a regular front-runner in the second half of this season. We might not be in the Showdown, but we'll be racing for more podiums before the season's out."