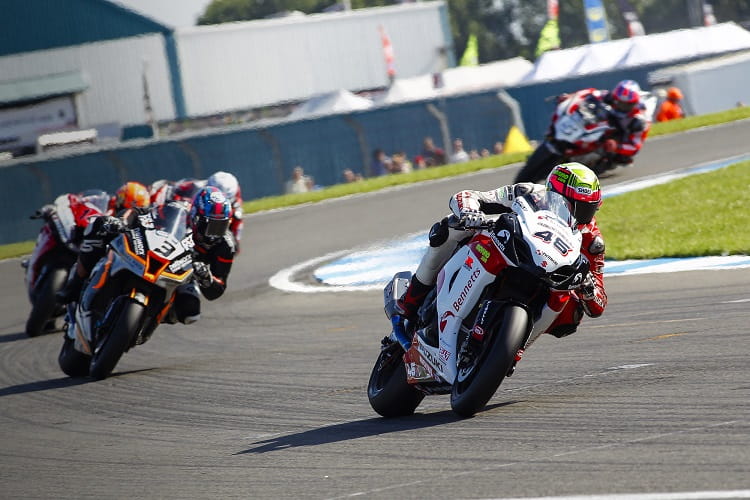 Bennetts Suzuki's Tommy Bridewell battled to a hard-earned sixth place in race two at Donington Park and round 10 of the British Superbike Championship, after recovering from a DNF in race one.

Bridewell, who was still feeling the after-effects of his high-speed crash at Oulton Park and struggling with fitness throughout the weekend at Donington, saw his first race curtailed with a mechanical issue, which forced him to retire early.

With the problem rectified for race two, Bridewell battled valiantly to overcome the pain and fight his way to a sixth placed finish, after a race-long dice with Richard Cooper.

Tommy Bridewell, "It was a difficult weekend. The problem in the first race was no one's fault. This isn't a standard road bike, it's a race bike and everyone's trying to get everything out of the engines, and sometimes this happens. No one's to blame, it's just one of those things. I found it a bit tough on the bike, physically, but no excuses. We had a good pace this weekend, but we just couldn't match the pace at the very front. I'm happy with the feeling from the bike, so we'll go again at Assen, which is a circuit that should suit us."

Team Owner, Martin Halsall, "We've not had a bad weekend, but we're still not quite getting the luck. Tommy's put a brave face on all weekend, but he's hurting from his crash at the last round. His pace was good. We started a little slowly but made good progress. Unfortunately we had an issue in race one and it cost us a finish, and also meant Tommy didn't set a good lap time for a better grid spot in race two. The team worked hard between races to get the bike sorted, and Tommy dug deep to go and get a solid result, and we're proud of his efforts."