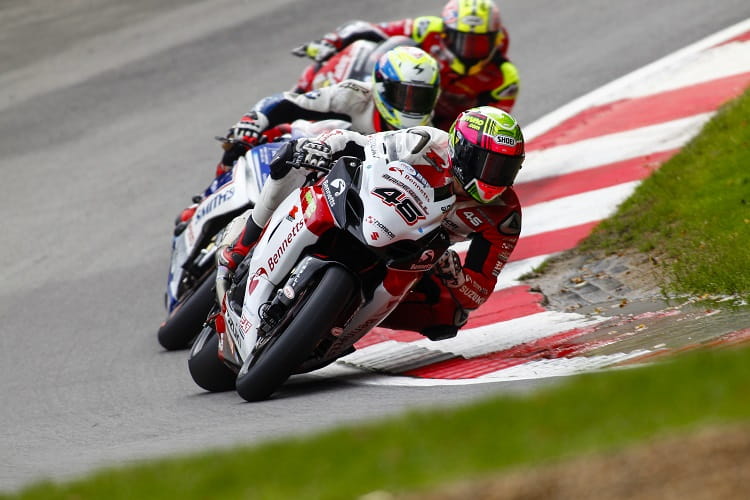 The Bennetts Suzuki team and Tommy Bridewell ended the 2016 British Superbike championship season with a top-five finish at the Brands Hatch triple-header, in an eventful and unpredictable weekend.

Bridewell qualified on pole position for the first of the weekend’s races, which started in dry conditions but was red-flagged early on with the team battling for the race lead. Restarted twice, eventually in wet conditions, the race ended with Bridewell taking the chequered flag in fifth place.

Sunday’s action got underway in mixed conditions and on a drying track. After a tricky opening half of the race that saw Bridewell drop to the latter point-scoring positions, he recovered as the race went on, coming back through the pack to finish in eighth place.

The final race of the 2016 British Superbike season was again not without drama, as the first attempt to run the season finale was red-flagged. Track contamination at Hawthorn delayed the restart, which eventually got underway as a 10-lap sprint race, but with a ‘no overtaking zone’ at the end of the back straight onto the GP section of the Brands Hatch circuit.

Bridewell made a strong start, but a mistake at Druids saw him run wide, costing him lots of time and also track position. Showing the fighting spirit he's shown all season, he put his head down, and even with the race running over a shortened distance, he recovered to take another eighth place.

Tommy Bridewell, “That was an okay way to end the year. The weather's really played havoc with us this weekend because we improved the bike and were fast in the dry and fast in the wet, but I need to improve my performance when it's the in-between. As I got into it in both of today's races our lap times were up there with the fastest out there, and we could catch people, pass them, and gap them, but by coming from so far behind there was only so much I could do. The results this weekend haven't been what we were hoping for, but we've had a good year. We've had some bad luck, but through the second half of the season especially, we've been fast. Our biggest area of weakness this year was the initial punch out of corners. I think I've only ever really been passed in a straight line this year, because on the brakes and in the corners we've been so strong and the bike's been brilliant. But I've had a great year with the team, I've had a lot of fun with everyone and really enjoyed my racing.”

Team owner, Martin Halsall summed up the season, saying, “This weekend’s been a bit up and down, not too unlike our season to be fair. It can sometimes take a bit of time to get going with new riders in a team, but after a little bit of a slow start, we’ve been a consistent runner at the sharp end of races in the second half of the season. Some bad luck has also cost us, and certainly cost us a place in the Showdown this year, but on the whole, if you look at the form guide over the second half of the year, Tommy has been one of the fastest riders out there, all on the outgoing GSX-R1000. We were confident going into this weekend, and it was brilliant to get pole in qualifying. Come the races all three took place in some fairly iffy conditions, ranging from treacherous on Saturday to the inbetween stuff we’ve had today, and we’ve seen what it can do to the field, with lots of regular front-runners struggling at v arious points, so to get fifth and a pair of eighths isn’t bad. We were hoping for more, but the weather can make it a bit of a lottery, so we’re happy to have a solid end to the year.

“Now I will go away and start preparations for 2017. I have a lot to consider and a lot of work to do to make sure we have a team structure and package in place for next year to make sure we can build on our performances this year and push on to fight for the Showdown and hopefully the championship in the future.”