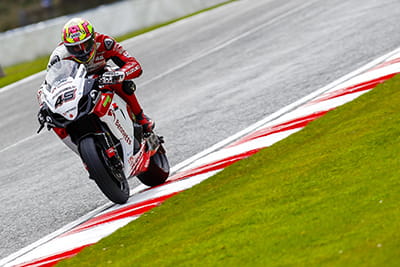 The Bennetts Suzuki team is ready to return to racing action at Brands Hatch this weekend and round three of the British Superbike Championship, following a positive private test at Anglesey.

After showing its potential in both the wet and the dry conditions at the previous round, the team was not quite as strong in the mixed conditions that presented themselves for both races. Luckily, the Anglesey test provided the team with a variety of weather conditions, which allowed both Tommy Bridewell and Ryuichi Kiyonari to work further on the setup of their GSX-R1000s, and gave the team the opportunity to work on the grip issues that hindered the performance in the mixed conditions at Oulton Park.

Tommy Bridewell, “We worked on everything at Anglesey. While most people would have thought that the weather was worse case scenario, for us it was the best. It was patchy in the morning, which was where we were really struggling at Oulton Park. We were fast in the wet, but we were losing grip with the wets on a drying track, so it was good to work on that area. We had full wet and dry sessions too. The bike was so good in the wet, felt really good, and we made some adjustments and I felt comfortable in the dry as well; the power is there, the chassis is good, it’s just the settings we needed to fine tune. I’m looking forward to Brands now. Silverstone was difficult, but we should have been competitive at Oulton before the weather hampered us. We’ve had some bad luck but I feel like the team and I are due a performance. We’re ready to challenge and I expect us to be up the front come race-day.”

Ryuichi Kiyonari, “We did many laps at the test and tried lots of different things. It was very positive and we are improving all the time, and I am feeling confident for Brands Hatch. Oulton Park was difficult and it was disappointing the way the races went, but I am taking the positives; the bike felt good and I was quite strong. Brands Hatch will be difficult because it’s a short circuit, all the lap times will be close, but after the test I am now looking forward to having a good weekend’s racing.”

Team Owner, Martin Halsall, “Anglesey was a good test for us, and gave us a chance to work on the areas we had been struggling with at Oulton Park, in particular in the mixed conditions, as we saw how strong we were when it was either wet or dry. The weather was kind to us, and gave us what we needed. The data reflects what the riders were saying, so we knew where we needed to focus our efforts and we’ve made big steps forward. We also improved the bike further still when we had some dry track time towards the end of the day. It’s not been the start to the season that we envisaged, but that’s racing sometimes. We’ll keep working, and we’re looking for a good performance this weekend at Brands Hatch.”

Round three of the 2016 British Superbike Championship takes place on the Brands Hatch Indy circuit from 20-22 May, with the first free practice session taking place at 10:15 on Friday.