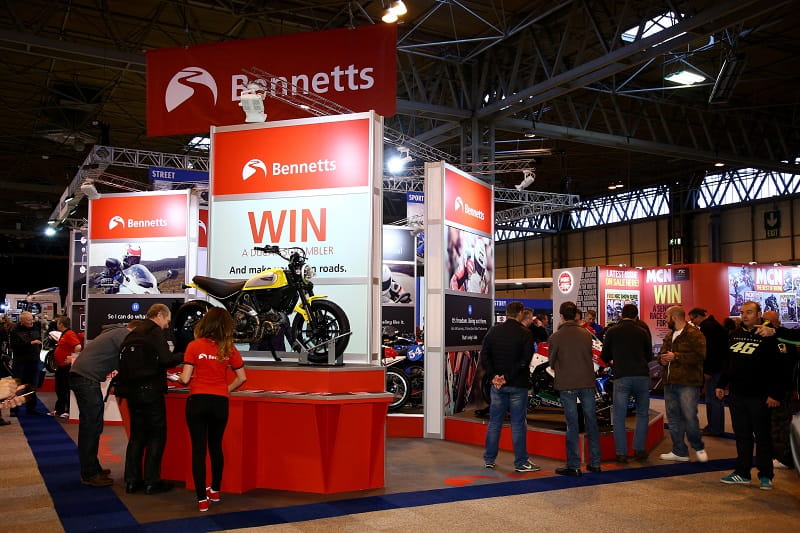 The UK’s biggest bike show returns to The NEC from 19-27 November 2016 where over 33 of the world’s leading motorcycle manufacturers will showcase their existing models and a first look at their 2017 machinery for the first time in the UK.

On our stand in Hall 3 will be Scott Redding’s Honda RC213V Honda, John McGuinness’ Bennetts Senior Classic TT winning Paton as well as Rory Skinner’s Red Bull Rookies bike, among others. Keep an eye out on Twitter @bennetts_bike for when they will be signing on the stand.

There is also the opportunity to win a replica Yamaha RD250LC, from the revived Pro-Am series that was showcased at the MotoGP at Silverstone this year, by entering a prize draw.

Bennetts advisors will be on hand throughout the show to give visitors insurance quotes and our existing policyholders are invited to stop by for a coffee and a chat on the stand.

BikeSocial will sponsor #AskWhitham on the Black Horse Stage in Hall 3. Every day at 11.00, 12.00, 14.00, 15.00 & 16.00, racer-turned-commentator James Whitham takes to the stage to grill a whole host of MotoGP, WorldSBK, BSB and TT stars on the 2016 season, giving a fascinating insight into the highs and lows of life as a professional racer. Got a burning question then tweet to #ASKWHITHAM!

14.       Details of the Winner(’s)(s)’ names may be obtained by sending a personal message to sofie.bronserud@bennetts.co.uk within 6 (“six”) weeks of the Closing Date.

15.       Personal data supplied during the course of the Promotion will only be used for the purposes of the administration of the Promotion but may be passed on to third party suppliers only insofar as required for fulfilment/delivery/arrangement of the Prize.

16.       The Winner may be required to take part in reasonable publicity in connection with the Promotion, including the publication of their name(s), geographic location and photograph.

17.       The Promoter accepts no responsibility for any damage, loss, liabilities or disappointment incurred or suffered by you as a result of entering the Promotion or accepting the Prize. The Promoter further disclaims liability for any damage to your or any other person's computer relating to or resulting from participation in or downloading any materials in connection with the Promotion.

18.       The Promoter shall not be liable for any failure to comply with its obligations where the failure is caused by something outside its reasonable control.

19.       The Promoter shall not be liable for any additional expenses incurred by the Winner in connection with the Prize including but not limited to travel, accommodation or refreshments.  Where the Prize involves use of a third party’s goods or services/attendance at a third party’s venue, the Winner will comply with any additional conditions applicable to attendance at/participation in an event/venue].