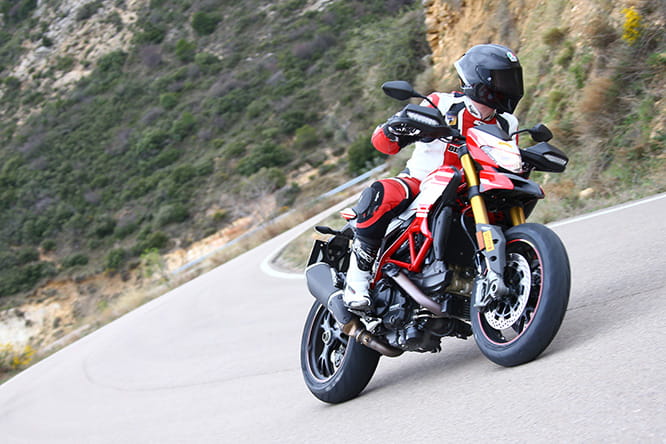 Could the successor to the Diablo Rosso II, which has itself been around for five years, be the best all-purpose tyre yet?

The latest member of the Pirelli's Diablo (Spanish for 'Devil') family was officially launched at Motorland Aragon Circuit in Spain the day after the World Superbike round dominated by Ducati's Chaz Davies. One of the world's most stunning race tracks and its glorious surrounding roads offered the perfect combination to test Pirelli's claims that the Diablo Rosso III is up to 30% better in terms of road handling and wet grip than the Diablo Rosso II.

The new Pirelli's are targeted as an even sportier version of its predecessor, which are not being replaced, and those target bikes are the 190 bhp+ litre class flyers including BMW S1000RR, Ducati 1299 Panigale and Yamaha R1 as well as the high performance nakeds such as BMW S1000R, MV Agusta Brutale 800 and Kawasaki Z800.

The new rubber was announced last October with Team Kawasaki World Superbike riders Jonathan Rea (2015 Champion) and Tom Sykes (2013 Champ) putting in some cheesy acting before flying around Jerez on a pair of Z800s, after all Pirelli has been the WSBK Official Tyre Supplier since 2004. Making excuses for the acting, Sykes told us, “Jonathan was feeling a little delicate because we filmed that the day after he won the world championship!”.

VIDEO (the out-takes at the end are worth watching!)

I must confess to having already ridden on these tyres. It was a couple of months ago at the press launch of the MV Agusta Brutale 800 after which I’d noted their “almost magical ability” before going on to highly recommend them. So I knew we were in for something special with the new multipurpose super sport tyre as we approached this, a more focused test session.

Handling, grip and consistency are three performance-related buzzwords used when testing any tyre and true enough Pirelli have focused on how the racing heritage through its association with World Superbikes has aided the DRIIIs development. The premium tyres have an RRP of £240 for a set of 120/180 but that doesn’t include fitting and for now we’ll have to take Pirelli’s word for it on the increased mileage claims until we can thoroughly test a set on one of our test bikes later in the year. 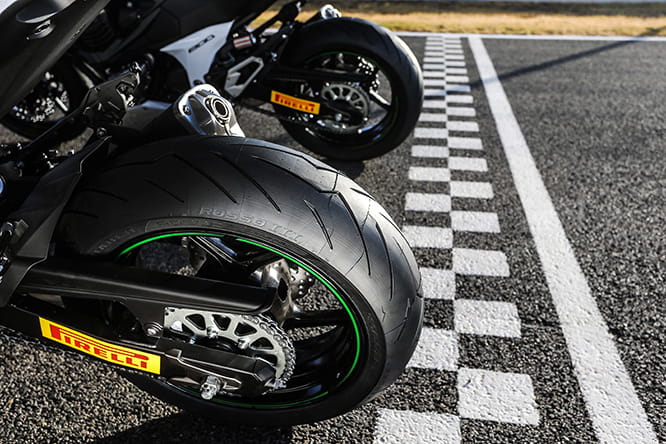 But what’s new about them? The dual-compound rear tyre has a silica compound covering more than 70% of the tyre, with the exception of the central band. This is designed to provide grip in a wide range of temperatures as well as a mixture of weather conditions. The front tyre is made of a single compound, all silica, designed to offer quality feedback and stability. Profile height is increased in the central section and it’s wider for more constant performance and faster handling. In fact, Pirelli claim an increase of a maximum lean angle of 52 degrees, up by 7 degrees over the Diablo Rosso II but 6 degrees down on the Supercorsa.

Speaking of Supercorsa, the firms’ sportiest road-legal tyre, the familiar flash symbol is featured in the tread pattern. These grooves have been designed to provide even and uniform wear over its lifetime while being efficient at shifting the water, a concept tested thoroughly during the afternoon when on track in the rain.

Reaching a set of tyres’ optimal temperature range would take usually take a couple of laps on track with peak performance on offer around lap 5. Well, according to the data Pirelli shared, even at the end of the first lap v. the same last corner of the circuit on lap 5, he was just 0.7s slower at 10s v. 9.3s and with a lean angle of 32.8 degrees v. 35 degrees. 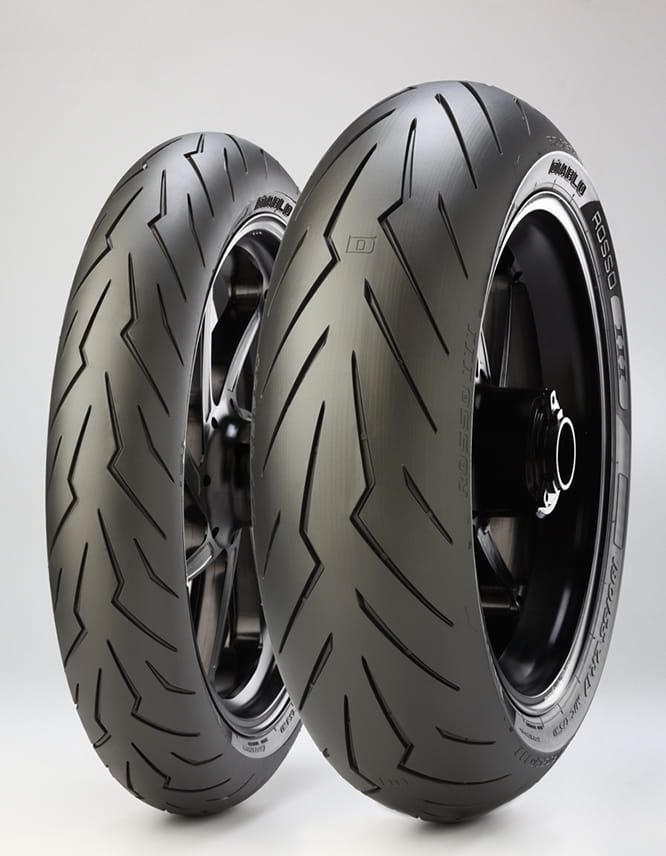 The Diablo Rosso IIIs were attached to a plethora of 'target bikes' for the assembled mass of journalists and it was as if Pirelli had organised the weather especially for us such was their confidence of improvements to grip and handling in the wet.

A gloomy and cold start to a 90 mile ride on mainly dry roads with sporadic wet patches had the Italian firms' representatives rubbing their hands with almost baddy-like glee. By the time we’d returned to the circuit they were almost high-fiving each other in fits of joy as the drizzly shower began that then continued all afternoon just in time for our three 15-minute track sessions.

Like your first visit to Toys ‘R Us as a kid with a £20 budget burning a hole in your pocket, sat in front of me was 20 bikes including BMW S1000R, Ducati Hypermotard 939 SP, Triumph Speed Triple R, MV Agusta Brutale 800 and Honda CB650F. What did I want to ride? The rush of excitement was as apparent as when selecting a Transformer that day at the toy shop, if I didn’t chose quickly my first pick might go. I hadn’t ridden the S1000R for a while and I knew it would have heated grips. Easy choice. 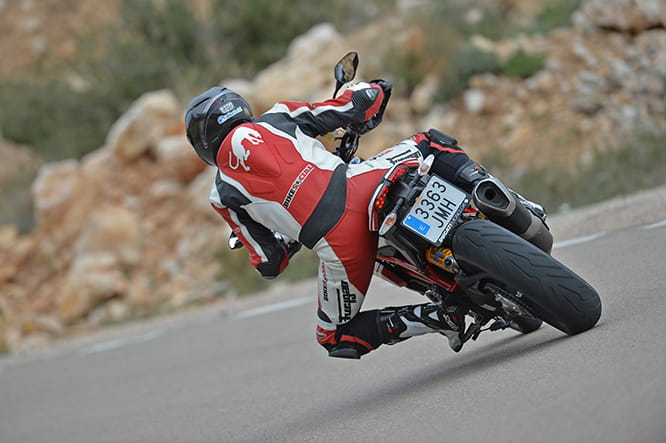 Off we set, a speed-limit observing cruise away from Aragon, south towards Olocau del Ray where I swapped for the 2016 Hypermotard. The change was ideal because of the differences between the bikes; one far sportier and squat while the other much taller with a far more forward seating position. Road noise was minimal as were the bumps and abrasions of the rougher surfaces, testament to the quality of the suspension of both bikes as well as the Pirelli’s.

The roads were mostly dry and the pace was average, representative of a typical spring/autumn ride in the UK. The tyres, as predicted, held up perfectly. Even with the occasional and purposeful grab of front brake or the deliberate push of the inside bar when cornering to try and unsettle the bike, the Pirelli’s stood firm. The front has so much grip and allows the bike to turn quickly while the rear is stable, smooth and progressive across its shoulder the further the bike leans.

What’s our biggest fear when riding in the rain? Probably losing front end grip while turning and still on the brakes causing a low-side. If you grab too much throttle on the exit of a corner the rear is more likely to slip and give you a micro-warning instead of just discharging you. 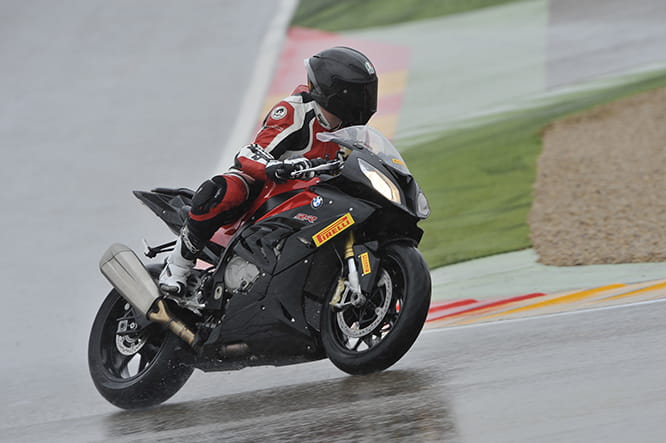 So, the rain gave me a chance to evaluate how the tyres reacted in the soaking wet in a relatively controlled environment; trucks weren’t going to be coming in the opposite direction nor laying their fuel around a corner. That didn’t mean it was danger free. Kerbs, white lines, astro-turf (remember Valentino Rossi in 2014), enhanced closing speeds and so on.

Once again, BMW, Suzuki, MV Agusta, Ducati and Kawasaki’s finest sportsbikes were lined up in the pit lane, fuelled, running and each equipped with a pair of scrubbed-in Diablo Rossi IIIs. It’s the kind of recurring dream that never gets dull. I’m most familiar with the S1000RR and its rain mode so hopped on the German and headed out for the first of three track sessions.

I’ll admit to being selfishly a little grumpy about being on one of the most interesting circuits in the world…in the rain. However, after the first session I was buzzing. I’d already concluded the DRIIIs had the potential to be the ideal all-weather, all-purpose tyre. They’re more of an all-rounder than a Supercorsa SP with their ability in the adverse conditions.

The control and confidence offered by the amount of lean angle was surprising, I could get the bike over far more than I’d expected as the water poured away from the front wheel like a bow wave. Zoom in on these photos to see how much water the DRIIIs were shifting.

Even in rain mode, the S1000RR only drops from 199bhp to 187bhp but its progressive throttle is friendly as is its hyper good suspension, brakes and stability. The quick right-handers of turns 2 and 3 at Aragon would be taken as one corner by a World Superbike rider in the dry with their elbow dragging along the tarmac. Even though I’m way off that standard, I was still amazed at how much the tyres, and the bike for that matter, stayed stable and composed. The traction control light was flickering on the BMW's dashboard and I actually became a was concerned the becoming over-confident on them. 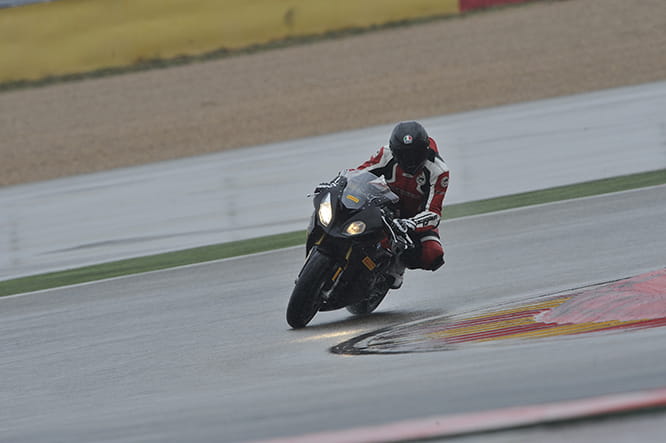 On the long back straight I’d see 170mph – of course top speed is slightly hindered because more patience when trying to pin the throttle out of the previous downhill 90-degree left hander was required. At the 250 metre board toward the end of the straight, the thrill of achieving such speed quickly turns into the realisation that a long, 3rd gear (in these conditions) left hander was looming. The tyres didn’t flinch. I braked, slotted down two gears and threw the bike in. Every lap I held my breath praying the Pirelli’s wouldn’t let me down. They never did. Feathering the throttle and looking for the final apex onto the start/finish straight, they allowed me open the throttle as the bike stood up and I crouched down. Once again they stuck. It was important to pick your line down the outside of the grid places otherwise they’d spin up over the paint. And onto the next lap…

I didn’t want to stop. The Pirelli Diablo Rosso III rubber are superb, all-purpose tyres and are ideal for riding to the track, riding on the track and riding home again, via the shops.

In 2002 the Diablo range was born, firmly establishing itself as a pure sports tyre heavily weighted towards track riding yet when the additional Diablo Rosso line launched in 2008, the range extended to become more road focused without loosing its sporty credentials.

Pirelli are the original equipment partnerships with Ducati, BMW, KTM, Yamaha, Triumph, Honda and Aprilia to name a few.

Which tyres are you running and on which bike?  or