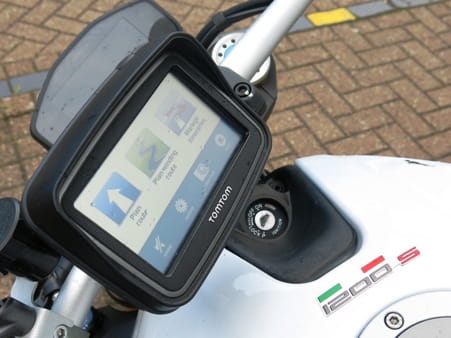 When driving we are quickly becoming a nation that relies on Sat Nav’s. When riding there’s less of an opportunity to rely on technology but then that’s half of the fun!

In time honoured tradition, there are a handful of options for when we do want to follow instructions; there’s the good old tape-the-map-to-the-tank example, or if you’ve got a tank bag then some come with a transparent document holder on top. Otherwise it’s your smart phone which is more often than not inconveniently stationed in your pocket.

Bike Sat Nav’s have come on leaps and bounds since their introduction and the class-leading brand TOMTOM, so good they named it twice, are now on their 5th version of the ‘Rider’ which was launched last summer and we’ve been using it on a variety of bikes over the last 4 months.

Being designed specifically for motorcycle riders, the operations are still touch screen but allowances have been made for gloved fingers which work accurately and quickly. There are additional biker-friendly options, including:

And possibly the best gadget built into the TOMTOM is the free updates which gives you four opportunities per year to fully update the maps, address and Points of Interest. 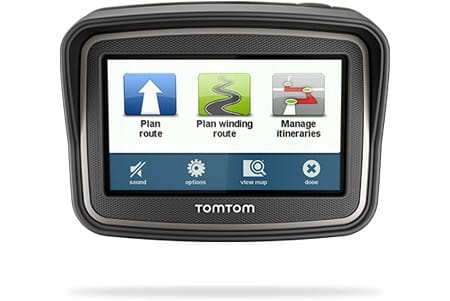 The device is also designed to use in all weather, including bright sunlight, a statement which was tested during a 300-mile ride through France attached to a Triumph Tiger XC. There was no sunshine but plenty of rain yet TOMTOM is equipped with a plastic sunshield around the screen.

On that occasion I used the bike’s battery as the power source which was easy enough for an idiot like me to fit although it does depend on where the battery sits on your bike. The Triumph was simple; whip the seat off, connect the power lead to each terminal on the battery and feed the lead under the fairing to the TOMTOM mounted on the handlebars. This obviously gives you continuous power but if you used the device’s own battery then you’re looking at more than 5 hours of use when fully charged.

It’s a sizable device which has its pros and cons. Yes, you get a clear view from the 11cm screen which is easy to see when glancing but equally you have to position it carefully so it doesn’t interfere with other handlebar operations or dials. 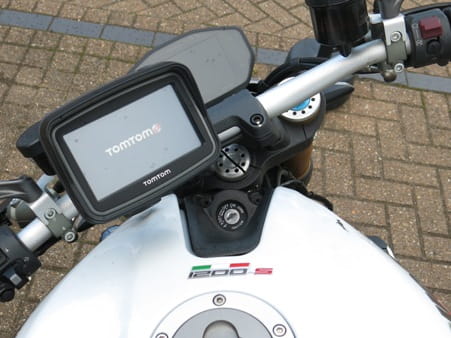 As versatile as the RAM handlebar mount options are, they’re not suited to every bike. We struggled to mount the device on a couple of models including a Yamaha R1 and a Peugeot Metropolis. These two are in the minority but you might want to double check your bike before making the purchase. On the plus side, the mount is sturdy, seemingly vibration proof and easy to fit. 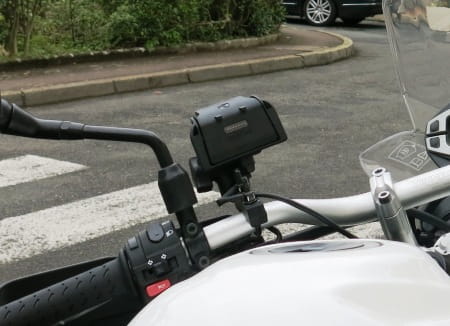 Bluetooth is a wonderful thing but only if you have a compatible helmet/gizmo. TOMTOM can be paired with your phone or helmet-Bluetooth kit to receive directions but this is the only way, there’s no speaker built-into the device.