If you were an Isle of Man TT enthusiast and wanted to show off its history and pay tribute to the greatest race on earth, how would you go about it?

We’re guessing that you didn’t have the same idea as artist and journalist Rachael Clegg who has recently put the final touches to her TT-inspired calendar, ‘Milestones’.  The 2014 version is the second incarnation in Rachael’s already memorable series and features a collection of monochrome images highlighting iconic parts of the Mountain course or that depict the Island’s beauty and history.  Oh, we almost forgot to mention that Rachael’s naked in most of the photographs. 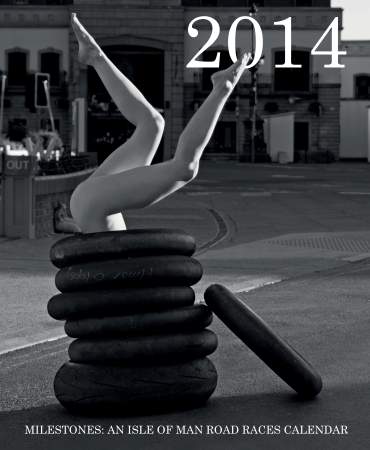 Rachael, who describes herself as a ‘budget blonde from Rochdale’, has her father and grandfather to thank for her motorcycling passion, they both raced in the TT and the calendar represents her homage to her childhood growing up visiting the Isle of Man year-on-year.  But it was on the return journey from the 2010 TT that the idea struck and so Rachael set about learning the history of the race and identifying how she could represent the most recognisable parts of the circuit.

“While I may not possess the racing prowess, the God-given reflexes or the sheer guts of a TT racer, I have paid tribute to the TT in my own unique way.”, Rachael told Bike Social. 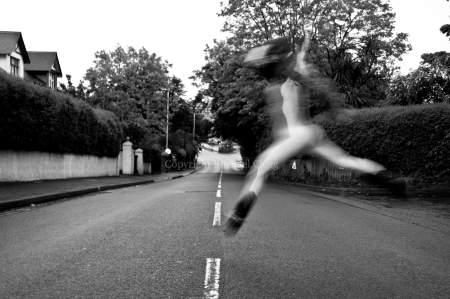 Al Jazeera photo journalist Peter Greste is the man responsible for capturing the images of Rachael at Waterworks, Ago’s Leap, Kirk Michael, Parliament Square, Ballaugh and Quarry Bends amongst others.  Many were taken at the break of dawn during the summer months as Rachael explains, “Darting around the TT course at 4am with no clothes on, let alone racing leathers, does bring about its own set of hazards. I’ve been bruised, battered, pursued by cattle, buried in tyres and stranded on a toilet.”  All in the name of art.

In 1977 Joey Dunlop stopped at Parliament Square to check his tyres hence Rachael's precarious balancing act for the front cover shot.  Meanwhile, each time Giacomo Agostini passed over the crest after Bray Hill he lifted his front wheel offering the photographers an ideal shot.  It also offered inspiration for another of the Milestones calendar photographs.

The 2014 ‘Milestones’ calendar is available at £18.95 from www.milestonescalendar.com