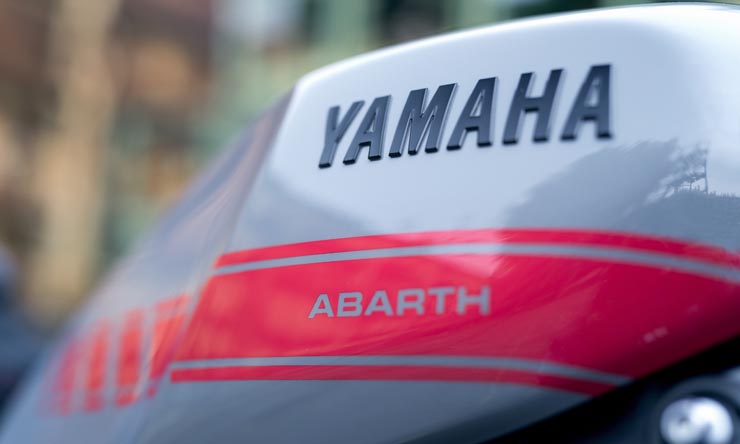 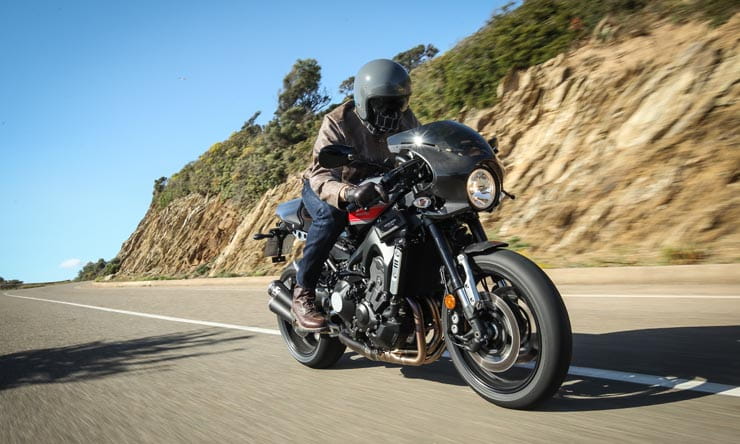 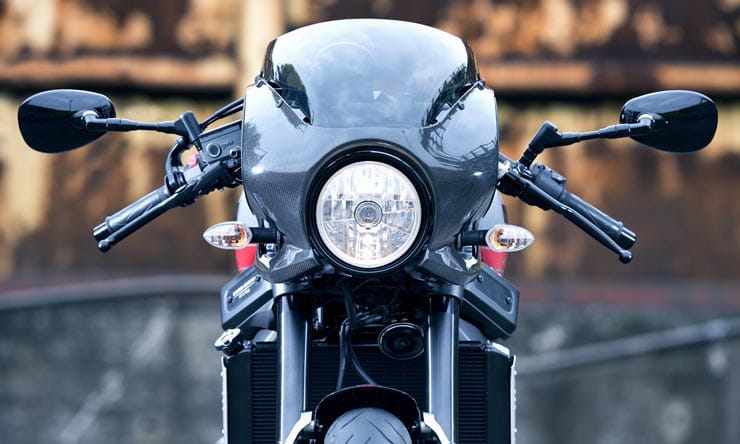 Abarth? Don’t they do tuned and specced-up Fiat 500s? Yes, they do. But now there’s a motorcycle that carries the badge of the famous Italian tuning house too – the Yamaha XSR900 Abarth, a motorcycle that takes the already excellent XSR900 and makes it the most hardcore version yet. It’s brilliant.

Yamaha has a long relationship with their Abarth friends which goes back to Abarth’s sponsorship of Valentino Rossi’s MotoGP Yamaha back in 2007. A concept FZ-1 was shown in 2008 but never made it to production. But now we have the results of that long relationship – the limited edition XSR900 Abarth. A bike limited to just 695 because of Abarth’s XSR900-matching 695 road car, that’s based on the Fiat 500 but putting out 165bhp and full of neat tricks like carbon-fibre dash, big Brembo brakes and a big guzzling turbo. But enough of the car (even though it's bonkers quick in the bends). 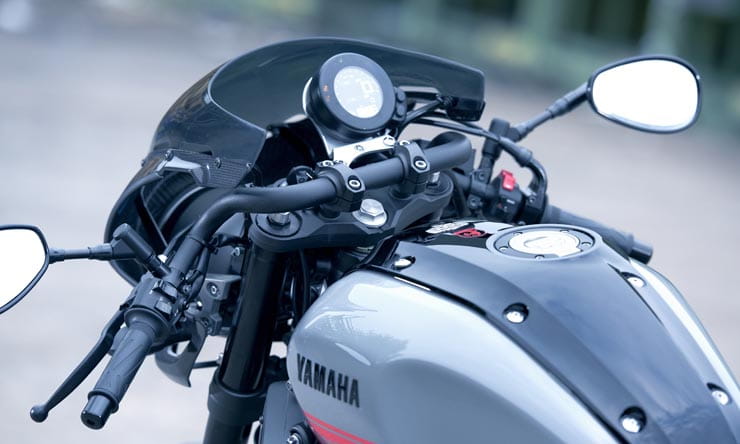 It’s like Yamaha said to their designers: ‘make the XSR900 that you want to make, go crazy, fill your boots’. And that appears to be what they did. Just look at it. No, go on, look at it. That carbon-fibre nose could do with being a bit bigger (in my opinion), but it’s made from carbon-fibre and looks great. That tail piece, the suede seat, the grey finish, and afterburner style LED rear light are amazing. I couldn’t stop looking at it all day, and those swallow tail bars make the XSR’s riding position pretty extreme, but we’ll come to those later. That Akrapovic twin-exit exhaust is beautiful and made from a combination of titanium and stainless steel. It’s road legal with the catalyst in, but a Yamaha staff member suggested it would be easy to take out one of the cats and make it a bit more free-flowing and noisy. For track use only, of course.

Abarth badges a plenty mean nobody would be in any doubt of what it is, too.

It’s so now in terms of what the neo-retro cool cats are building right now, with caps mounted on the side of their jeans and their chains hanging down their selvedge denims. But we’ll let them off, because this bike looks like Yamaha just took one of its own Yard Built special and made it into a production bike. And that’s because they basically did. Even if it’s limited to just 695 editions, the £1700 extra over the standard, and brilliant XSR900 gets you a bike that looks just so bad ass on the road. A standard XSR900 £8299, the Abarth is £9999. 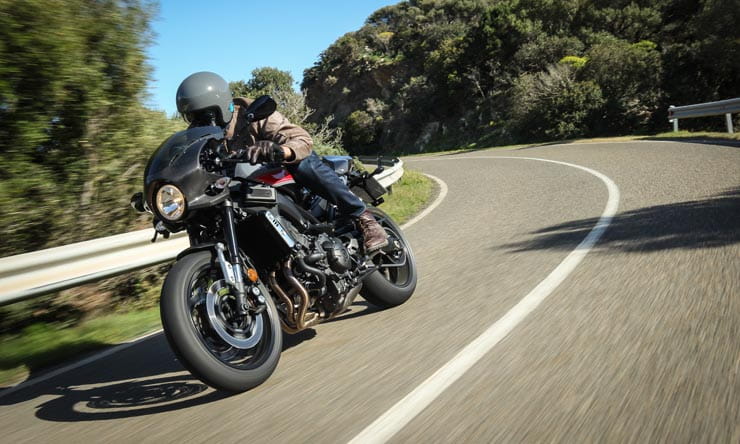 What price would you pay to never see another one on the road? With only 695 built, you’re not going to run into one very often. Initially 145 bikes were offered online with a VIP package that included a day with Abarth on track. But Yamaha say that there are around 50 bikes still available for sale in the UK, though with around 80 dealers in the UK, not every local Yamaha dealer will have one, such is their rarity.

In my mirrors, on the coast road that hugs the coast line near Chia in Sardinia, it looks like my fellow journalist testers are lying down on the tank because of those handlebars, and it makes the bike have so much attitude when you see someone riding one past. It’s such a cool-looking motorcycle. 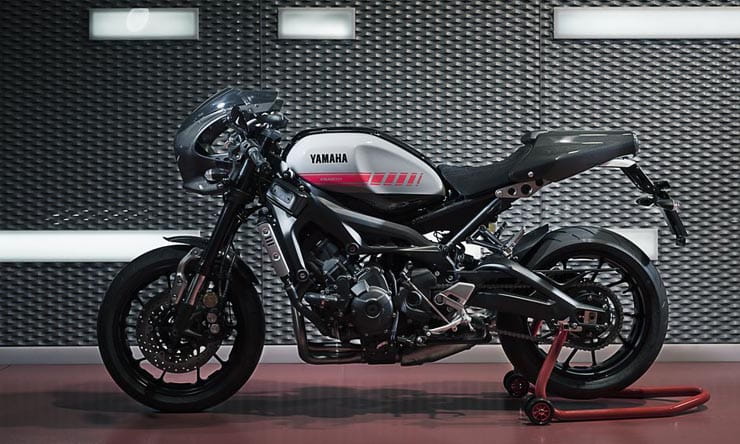 Those handlebars put so much weight on your wrists that they’re actually slightly uncomfortable, but once you start going faster, get out of town and they feel better. The bars change the way you ride the XSR900. The weight of your chest sits on the tank, changes the weight bias of the bike and makes the whole thing feel more aggressive. You end up riding it faster, attacking corners faster and tucking in behind the screen on the straight with your chin on the tank. The extra speed you find yourself using means occasionally the suspension feels a touch softer than you remember on the standard bike. But it floats through corners, there’s tons of feel, it steers beautifully and the bars give you loads of confidence in the front tyre, either under braking or turning in at hard lean. The brakes are more than up to the job, never spectacular, but decent. A set of Brembos to match the car's would look great though.

There’s traction-control, but in 25+ degree heat on smooth Sardinian roads, I turned it off and let the grip find me. The throttle connection is so precise, the torque where you need it, the gearbox slick, and that 847cc, 113bhp, three-cylinder motor is so smooth. With a linear power curve, you’re always in the right gear. It sounds good, and always feels like there’s more power than it claims. It’s such a fantastic motor anyway, that it would be rude not too unleash a few more horses by removing that catalyst.

On paper the changes to the XSR900 Abarth don’t sound like a lot, but they make the XSR more exciting, more aggressive and turn it into the most hardcore version of the XSR900 yet. I love it. 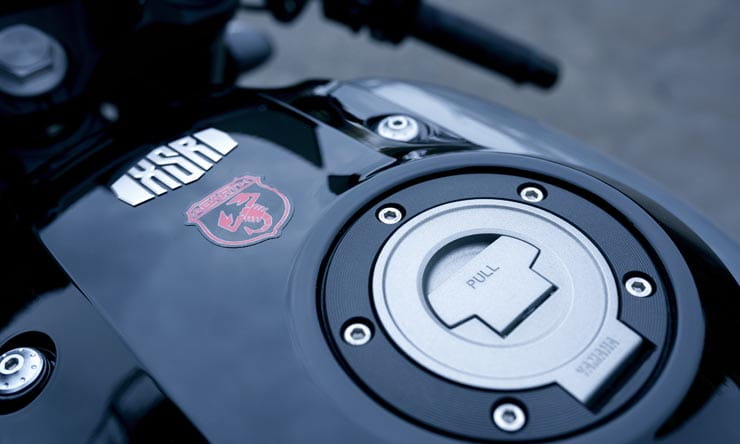