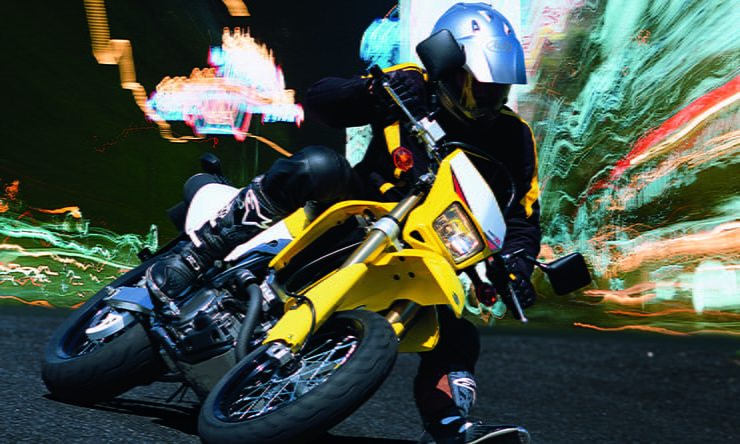 Back in the mid-2000s, the whole supermoto fashion bubble was expanding nicely and as a result manufacturers started to show an interest in jumping on the bandwagon. The result of this was a series of fairly soft supermotos designed to appeal to the mainstream audience. Bikes such as the Honda FMX650 Funmoto, Yamaha XT660X and the Suzuki DR-Z400 SM all promised the cool supermoto look but in a practical urban machine rather than a harsh converted 'crosser. While the supermoto fashion bubble has now well and truly burst, replaced by hipster-pleasing café racers, that doesn’t stop a DR-Z400 SM remaining quite an appealing urban machine.

Small, light and surprisingly peppy thanks to its water-cooled single cylinder engine, the DR-Z thrives in an urban habitat. With a light 137kg weight it happily zips through traffic with minimal effort and maximum fun. The SM’s 17-inch wheels and road tyres make it more assured than its off-road targeted S variant, which is a bonus, and the single front brake is also stronger. Get it out of town and the hard seat and vibrations from the engine getting constantly hammered mean it’s no fun on a dual carriageway, but what do you expect from a small capacity single?

The SM may have dropped off the UK’s sales lists in 2008, but that hasn’t stopped it still being sold in other countries due to its popular blend of inner city practicality and sheer fun factor. As a cheap, and fun, urban blaster you can’t really go wrong with a DR-Z400 SM. 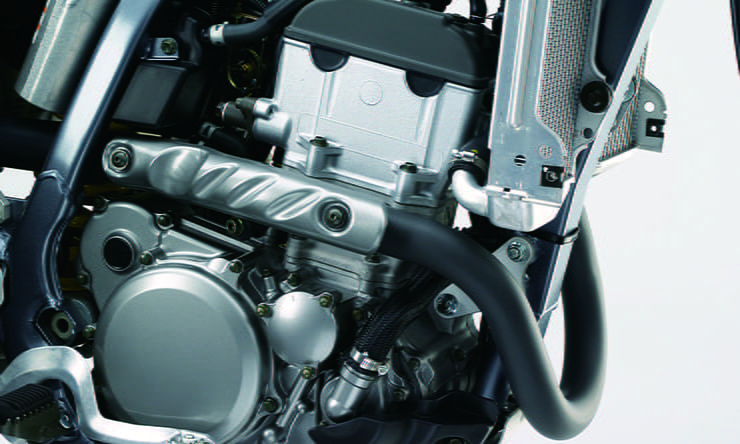 The DR-Z400 engine has been around for donkey’s years and as such is a very well known and reliable unit. In the SM, which is basically a road bike, it is less likely to suffer the off road abuse it would in the more enduro targeted models such as the S, however there are still a few issues. On the road the single will get worked hard, so check that when it starts from cold there are no signs of it burning oil that may hint at worn piston rings. Listen for any grumbles that may suggest at big end issues and also inspect the radiator for any dents or holes. Early bikes had cam chain tensioner issues, but these should have been sorted. By now the exhaust has probably got some rust issues, so if it hasn’t been replaced check for leaks, and the suspension will probably need a refresh, so look for oil weeps. As with any commuter, check the wheels for dents and the bike itself for crash damage. The DR-Z does crash well and is unlikely to be harmed other than cosmetically (which is cheap to sort), but any marks are a good haggling point. Theft is a big issue on the DR-Z as its security is minimal, so look at the steering lock for any signs of tampering.

The DR-Z400 SM wasn’t updated, however if you fancy a bit of a variation the DR-Z400 S is more off-road biased with a 21-inch front wheel and an 18-inch rear. The S version was sold in the UK from 2001 until 2008, with prices for early model starting at £1,500 and later bikes going for around £4,000. The S gets used off-road, so pay extra attention to its condition and the underside of the motor when buying used. 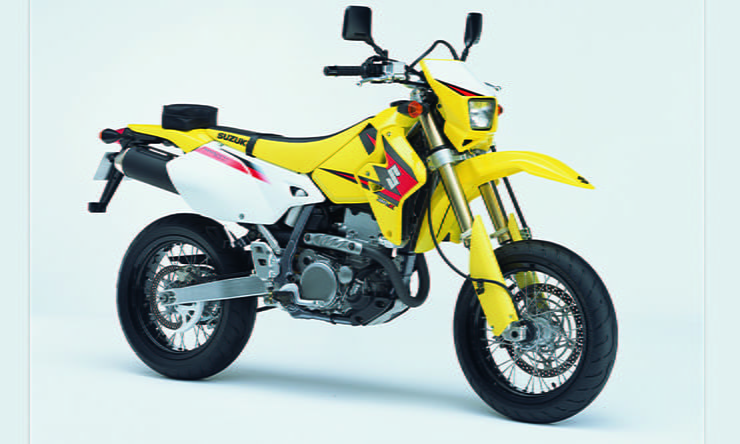 The DR-Z400 SM wasn’t an expensive bike to start with and used prices are pleasingly low. You can pick up an early SM for around £2,000 in a private sale with dealers adding around £500 to this figure. Later SMs will set you back nearer £4,000 from a dealer with tidy private examples in the £3,500 bracket, but as the bike has remained unchanged for all its life there is no harm in going for a cheaper early model if it has been well looked after.

http://www.thumpertalk.com – A forum dedicated to single cylinder bikes with a really useful DR-Z section. It’s mainly off-road, but the DR-Z engine is the same in all models so this isn’t an issue and there is a sub-section on the SM.

http://www.drz400uk.org - A really useful UK-based forum dedicated to the DR-Z in all its various shapes and formats.