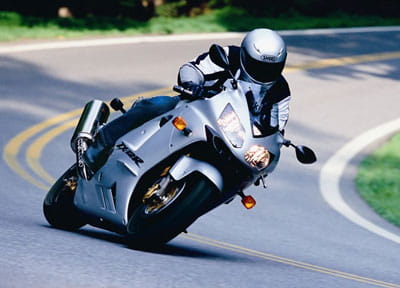 Kawasaki’s reputation for very fast bikes was again a talking point when the world’s press got to grips with the ZX-12R. Kawasaki’s hierarchy didn’t say much on the subject of their new bike beating Suzuki’s monstrous GSX1300R Hayabusa but their cheery faces said a lot.

The fact that it had been wind tunnel tested and incorporated the latest in Ram-Air technology (getting as much high speed air into the airbox as possible) with the adoption of a huge inlet nozzle under the fairing, it was no surprise when it turned out the ZX-12R was fast, very fast considering the weight of it. But subsequent tests really couldn’t split the two Japanese bikes and in the end it came down to personal preference of Kawasaki or Hayabusa

Yes, the Kawasaki could hit a genuine 192mph in stock trim on a deserted runway in ideal conditions. But the first model never featured a speed limiter. The second version did as part of an agreement with all the major manufacturers, so 186mph as its lot… in standard trim. But, ye gods, could it get to this speed quickly… very quickly.

The 1199cc engine was a rampant thing and the majority of owners made the most of it. Other owners preferred the Kawasaki because it was comfortable, better looking and, more importantly, it went around corners like a heavy sports bike whereas the Suzuki struggled and made the rider struggle even more to take a turn at the same speed as the Kawasaki.

View the Kawasaki as a big bruiser sports bike with weight, with a lot of power and you’ll have the ZX-12R pegged. But it was comfortable too and can rubbish long journeys, providing you remain at near legal speeds and don’t viciously work the throttle, fuel consumption is very good.

In 2002 the ZX-12R got a new gearbox, changes to the air intake system and throttle system modifications. This at least gave the ZX-12R increased and smoother acceleration but its cards were already marked as genuine sports bikes were now achieving similar power figures.

- points – too fast for most folk. Heavy and not the best looking creature on two wheels