The £5,100BMW G310GS, £5,329 Honda CRF250 Rally and £4,599 Suzuki V-Strom 250 are all light, more manageable bikes: “Don't think they lack the power to go the distance,” said Nathan. “With a change of approach and attitude, even 24bhp can conquer the world. You might have to choose fewer motorways and be a touch more modest about your daily distances, but the upshot is that there's a chance that you’ll see more and experience more, rather than blasting though places jus to get somewhere else.

“The money saved on these bikes can be spent on travelling, and with less mass to carry around, a lighter more manageable motorcycle can allow you to explore those harder to reach places without the worry of what happens if you drop it or get stuck down a tight lane. They can also be a lot more fun, especially if there's a few of you…” Here’s his take on the Kawasaki Versys-X 300… 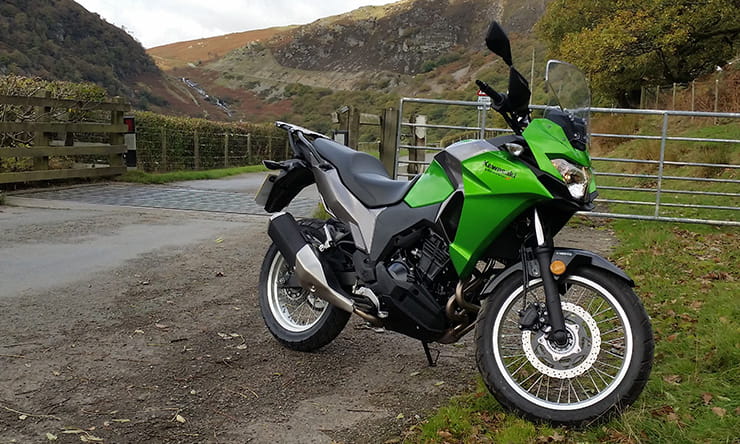 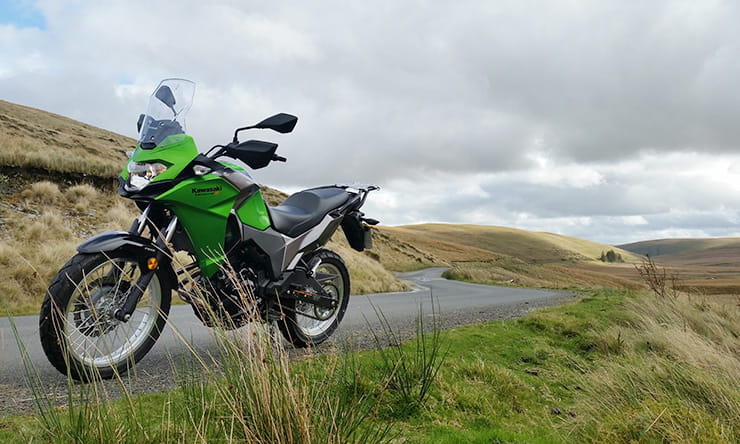 Much like Suzuki with its V-Strom series, Kawasaki’s Versys-X 300 is the Japanese company’s complement to the 650 and 1000cc machines of the Versys family range.

Of the four new mini adventure bikes for 2017, the Kawasaki is arguably the most grown up in appearance. Angular in a distinctively Japanese way, the Candy Lime Green paintwork (also available in metallic grey) is eye-catching, and from the first walk around you get the sense that the Versys is a very well finished and styled machine.

Basics such as the snug panel gaps, nicely curved rear brake lever and the well thought through and tidily finished rear racks are signs that a lot of attention went into making this bike. Parts of it feel like a Japanese bike built in the ’90s, and that’s meant as a good thing. For the list price of £5,149 it’s also good to see spoked wheels – 19-inch at the front and 17-inch at the rear. Tyres are IRC Trail Winners; 100/90-19 front and 130/80-17 rear.

The Versys-X uses the same eight-valve, liquid-cooled 296cc parallel twin engine that’s in the Ninja 300 sports bike, only here with tuned airbox shape, intake funnels, and exhaust to give greater midrange power that's arguably better suited to the Versys platform. Power is the highest of the small displacement adventure bikes at 39.5bhp, with the rev limiter not cutting in until a lofty 12,750 rpm.

Sitting on the bike it has a lovely upright adventure stance. The seat is taller than the G310GS and V-Strom 250 at 845mm, but the narrow pitch of the seat makes it easy to get both feet on the ground, and with well-placed bars right in front of you it’s perfectly spacious for an average adult. It also has an excellent turning circle, and from initial inspection the tallest and most protective screen of the lot. Weight is a manageable 175kg, and despite service intervals of every 3,750miles, only every second service is going to cost upwards of £250 (the interim services being around £50), with the big one (valve clearance check) at 15,200 miles likely to be in the region of £350. The parallel twins from Kawasaki and Suzuki are certainly more expensive to service than the two singles from BMW and Honda. 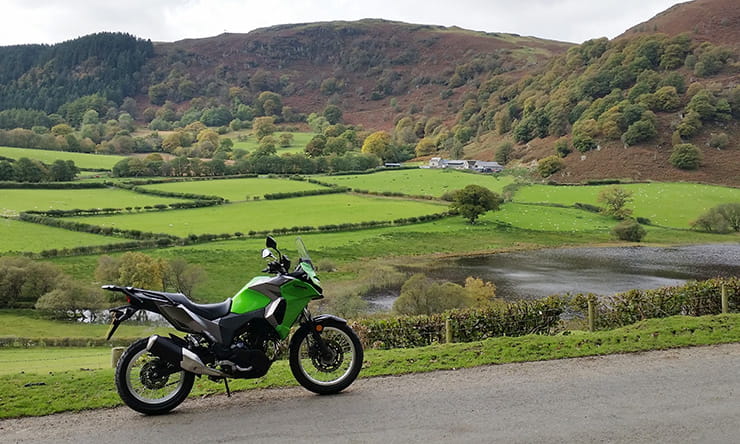 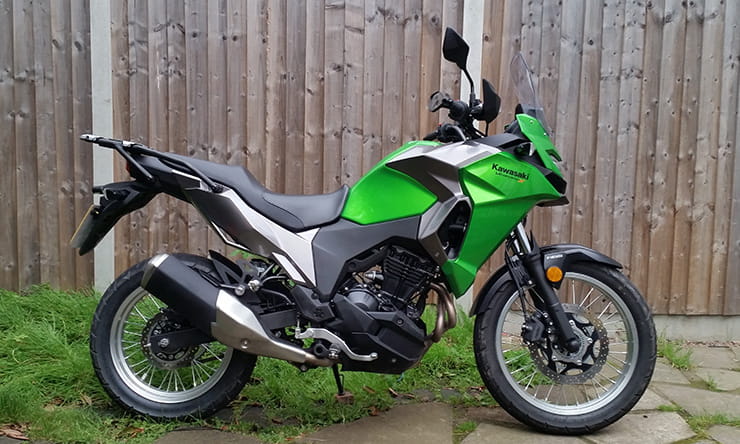 Taking to the Tarmac for the first time there was a fair amount of disappointment. For a start the seat felt way too firm with insufficient padding. The suspension also seemed firmly tuned, with the bike harsh over back streets bumps. Then there’s the engine, which seems to have little low down pull, making you wonder at first if the light clutch is slipping. I’d probably been spoilt by too much time on big singles and lazy high-capacity V-twins, as unlike those, the small displacement parallel-twin in the Versys-X 300 really likes to rev. It just takes time to recalibrate to this, soon realising that you need at least 6,000rpm to get it to go. With short gearing (arguably too short) first, second and third are quickly dispatched.

It was on a long ride out to Wales and back that the Kawasaki slowly started to make sense. Once rolling the engine is torquier than it initially feels, quite strong in sixth even at speeds below 40mph, due in a large part to the three extra teeth on rear sprocket over the Ninja 300, hence that short gearing. Down to fourth gear in the slick 6-speed gearbox and the bike really starts to spool up for the big overtakes – almost like a two-stroke TZR125R hitting its power band – as you fly past traffic with the easy-to-read rev counter in the red and the rush that comes with a well-timed full-power overtake. It's like being a seventeen year-old in the nineties again, and the performance is about the same, just a bit less all-or-nothing. 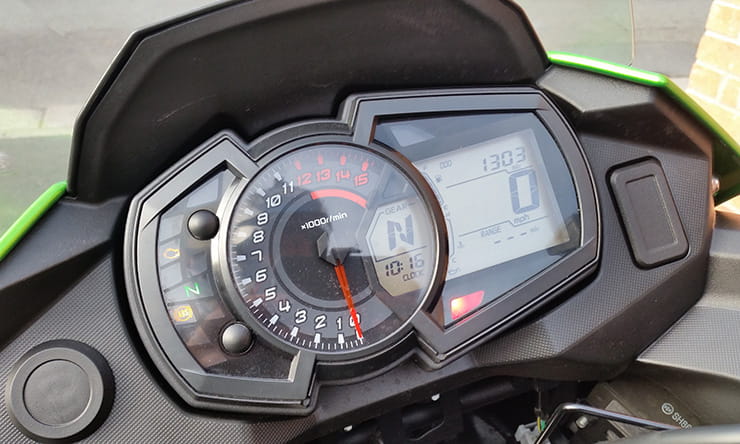 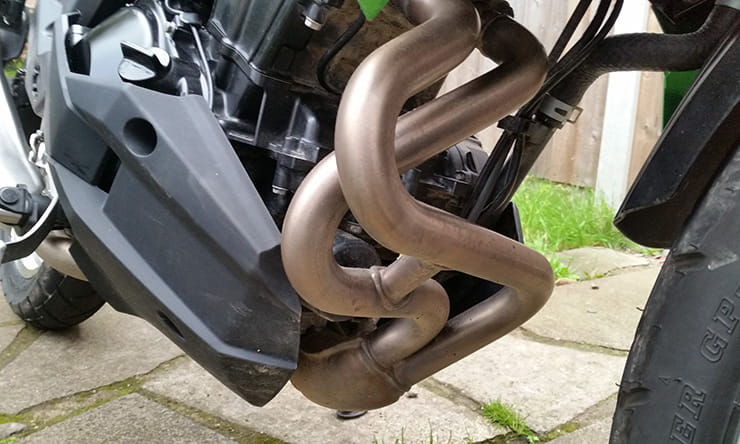 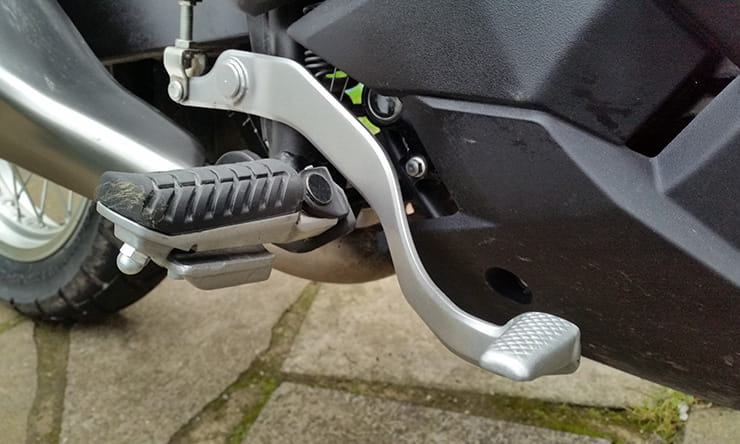 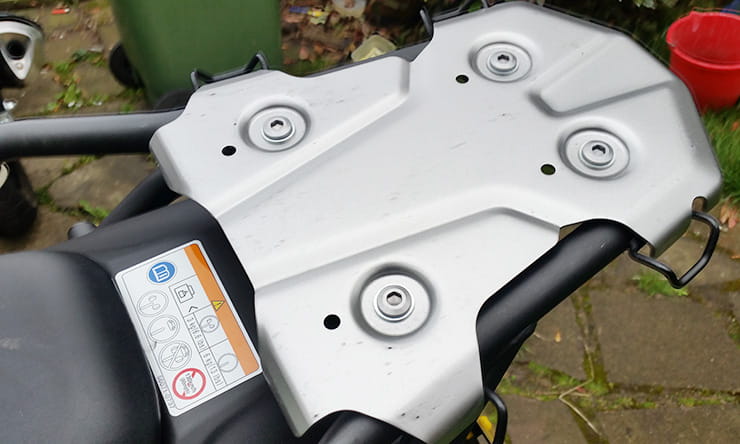 Approach a corner and despite narrow tyres (for the modern age at least) the Kawasaki tips in flat and keenly, with plenty of grip from the Trail Runners, while the wide bars make for easy and accurate changes of direction and the elevated riding position gives good vision of the road ahead. Solid ABS-equipped brakes inspire confidence, while that apparently firm suspension turns out to be well damped and capable of tracking a clean line while dealing with mid-corner imperfections along the way. The tank range is also good, with a substantial 17-litres proving more than adequate for a spirited 200 mile round trip to Rhayader in Wales and back. The Kawasaki also has the best standard screen of the four new mini adventure machines, keeping most of the wind buffeting at bay.

I’d not had as much fun on a bike for a long time. Power is all at the top, and because there’s not a huge amount of it, you can spend your time chasing it without ever feeling like it’s going to get you into trouble. With a secondary balancer shaft it’s also very smooth, with 60mph equating to about 7,000rpm, but even at sustained motorway speeds there’s barely any buzz through the bars, seat or pegs. In fact, it feels like it’ll hold 80mph quite happily all day long, and oddly – despite the firm seat – it didn’t become uncomfortable even after a six hour day in the saddle.

The biggest fault I’ve been hearing from people interested in the bike is the difficulty in getting test rides, with not all Kawasaki dealers stocking the bike. It’s a shame, as the bike would suit anyone looking for the zest of a sports bike in a more upright manageable chassis, but if you visit www.kawasakitestride.co.uk you can find the nearest dealer to you with one to try.

Surprisingly, the bike also impressed off-road. The main reason was the natural upright standing position. The bars sit up quite high and wide, the bike feels nicely balanced and despite road-biased tyres and a relative lack of suspension travel (130mm front, 148mm rear) it was happy enough bouncing along a rough trail just outside of Rhayader. The limited amount of power in the low rev range also means that the bike never feels like it’s going to get away from you, and with a surprising amount of engine braking you can control your deceleration with the throttle as much as you need to with the ABS-equipped brakes, which, unlike the Honda and BMW, you can’t disengage at the front or rear. 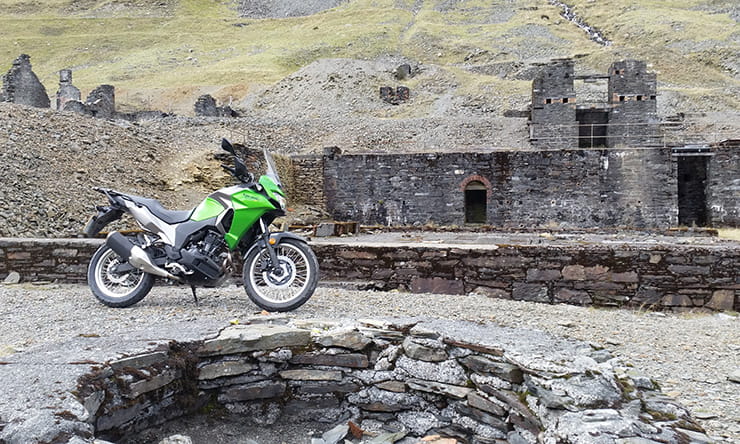 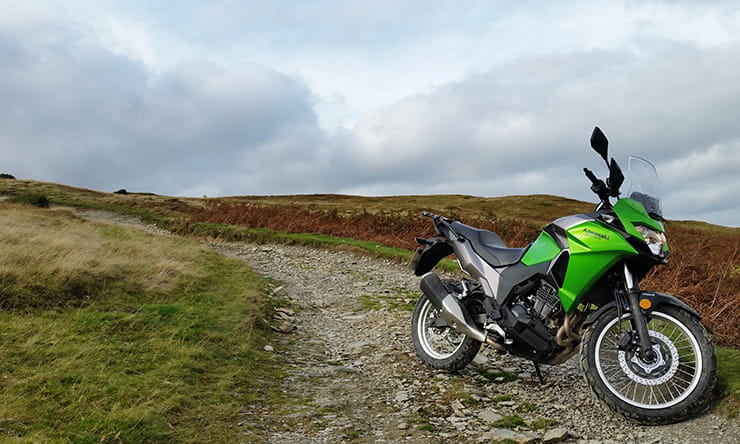 In fairness to Kawasaki, the Versys-X 300 was never pitched as a ‘proper’ off-road capable machine, so it would be wrong to view the bike as some sort of mini KLR650; it’s not. Gentle fire trails are about all that are suggested, and with no proper sump guard, exposed header pipes and slippery rubber foot pegs you would hardly argue with that. Yet it’s the little things, such as the tight turning circle and manageable wet weight of 175kg that make it surprisingly at home on the kind of moderate trails that are often the limit of most riders anyway.

As with the Suzuki, you can also spec the Versys-X 300 with panniers or top box (you can’t use both together). The two 17-litre side boxes cost £403.95 and the top box £115.90. Given the legs of the Kawasaki it does feel like a bike that would be happy doing longer distances, making a handy machine for touring Scotland, Wales, or even into Europe if you don’t mind giving the motorways a break. The beauty of it would be the fun you could have on the twistier sections and given its confidence on unpaved roads it would also allow a bit of exploration along the way.

The Kawasaki is something of a multi-layered machine. It’s fast and focussed but refined enough to do distance, and equally at home hopping along a few trails. You get the sense that Kawasaki has put a lot of effort into it, and while gripes such as the low gearing and firm seat sour it slightly, the bike deserves serious consideration.

The Versys-X 300 offers more dynamic thrills than the Suzuki V-Strom 250, as well being physically bigger, though perhaps, with its peaky engine and firm suspension and seat, it’s probably not as well suited to daily commuting as the Suzuki. Compared to the G310GS, the Kawasaki edges the BMW for on-road thrills, but the low-down tractability of the single cylinder engine in the G310GS makes for a more laid-back ride, while the supple suspension of the mini GS also makes it more user friendly than the Kawasaki on the trails. As for the Honda, there’s a reversal of attributes, with the CRF250 Rally as suited to the trails as the Kawasaki is to the road. They both have a good go at the other, but each has its natural habitat, you just have to work out what you need from your bike. Trail thrills, or road thrills…

In a nutshell: A sporty road bike that surprises on the trails