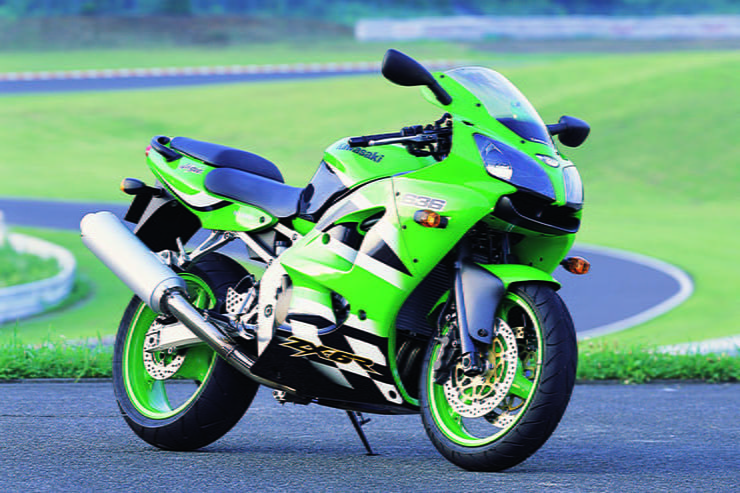 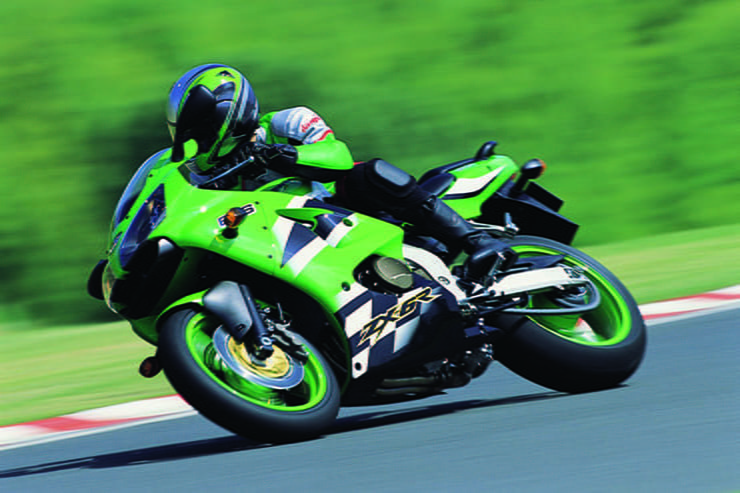 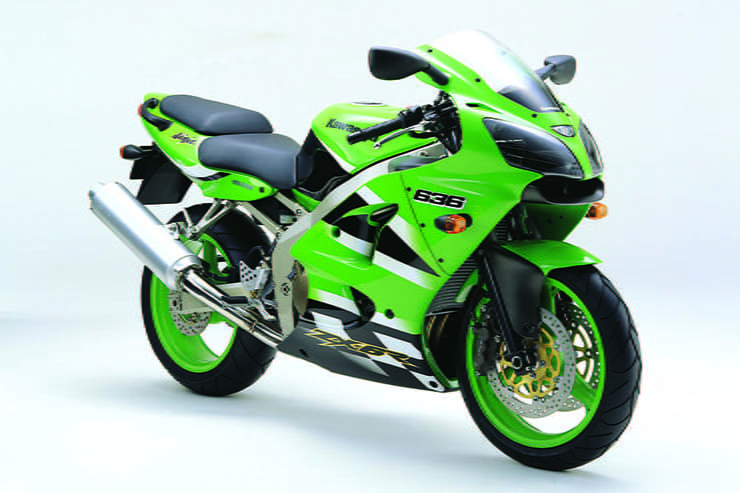 As stopgap models go, they don’t get much better – or shorter lived – than the 2002 Kawasaki Ninja ZX-6R. This anomaly of a supersport bike arrived and died in the same year and on the face of it served very little purpose whatsoever. But who cares about a bike’s place in motorcycling history? What you should be interested in is the fact that this is a really good supersport bike that has a low price tag, bags of grunt and pleasingly high old-school levels of comfort.

Taking the 2000/01 generation as a base, Kawasaki basically did very little to create the 2002 636 version. Amongst a claimed 40 engine mods, the motor received a 2mm larger bore at 68mm, giving it a 636cc capacity, while the front suspension was upgraded via a new finish on the fork sliders, uprated internals and revised damping rates. So basically, it’s the previous model of ZX-6R with a bit more grunt, which is a very good thing…

While out of the supersport game in terms of track ability when compared to rivals such as the Yamaha YZF-R6 and Suzuki GSX-R600, much like its bigger brother the ZX-9R, the ZX-6R wins the road war. Big, comfortable and thanks to a motor with an extra bit of grunt, the 636 makes for an excellent day-to-day supersport bike. There is no need to rev the nuts off the inline four, it has enough mid-range to allow you to take it easy when required but also delivers a thrilling top-end zap alongside a wonderful airbox growl. And its chassis isn’t bad either.

As a road bike the Ninja’s roomier riding position, well padded seat and higher-set clip-on bars are a blessing when compared to its more full-on race rep rivals. This is a genuinely comfortable supersport bike that is also extremely good in the bends. It’s not razor sharp, but it’s certainly no slouch and unlike the B1H model that followed it, the 636 is far more stable and less prone to shaking it head. Yes, the brakes are left a bit lacking, but treat it to a set of high-friction pads and some braided lines and you are well on the way to curing this woe.

If you want a sporty bike that won’t cost the earth to buy and insure that is also practical the obvious choice is the Honda CBR600F. But if you want something equally practical that is a bit different, search out a Kawasaki Ninja ZX-6R 636 as they are one of the hidden delights of the used bike world. 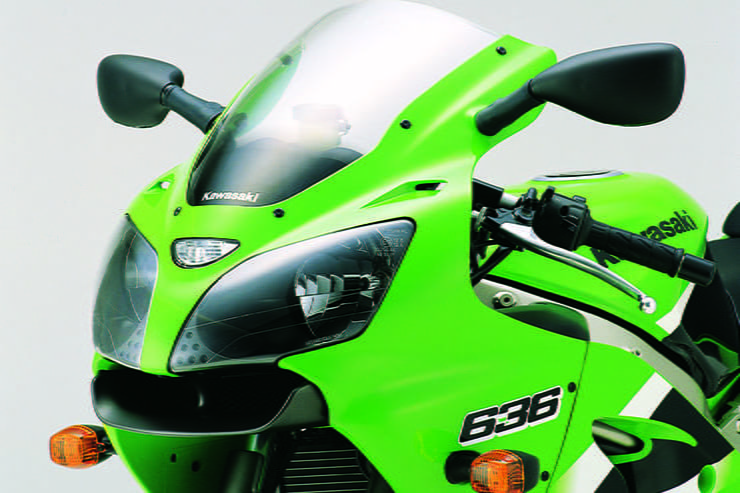 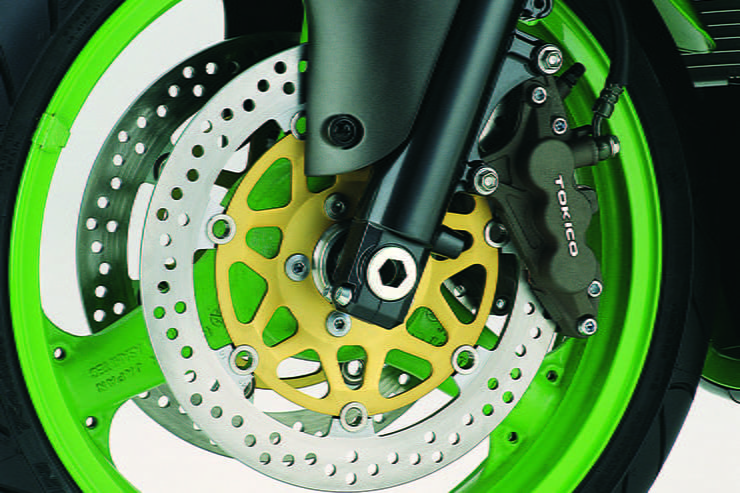 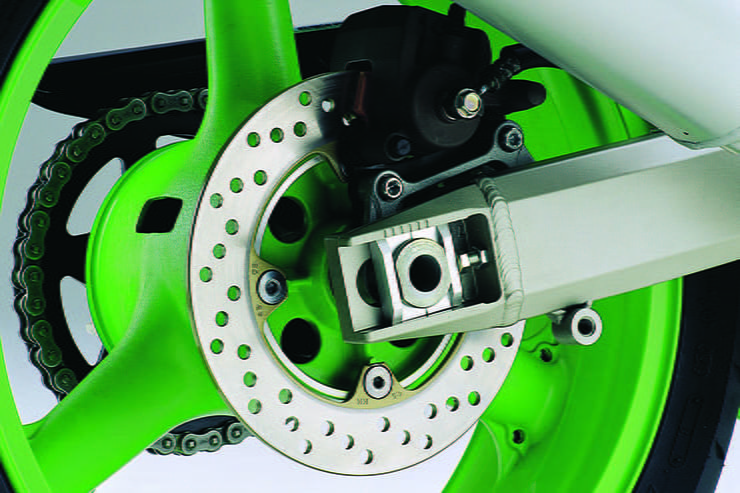 The first thing to check when buying a ZX-6R is the fact it is actually the 636cc model! In the early 2000s Kawasaki’s sales were sluggish and as a result a lot of the previous model of ZX-6R, which was released in 2000 and unaltered in 2001, were left unsold. If you search the classified ads for a 2002 ZX-6R, a large number of the results are late-registered 2001 599cc bikes and not actually 636cc ones. The obvious clue is the big 636 logo on the fairing panel, but if the bike has an aftermarket fairing, just check its registration document for its capacity as well as the engine itself to be on the safe side. Basics over, move onto the bike…

In the early 2000s, Kawasaki relied on Tokico six-piston calipers to add some bite to their brakes and these are quite frankly terrible when it comes to seized pistons. A real blight on the caliper, they require fairly regular rebuilds as well as general maintenance (frequent cleaning with brake cleaner and greasing the pistons) to ensure all works smoothly. On a used bike, always get the front end up in the air and listen for dragging pads when the wheel is spinning as well as feeling for any pulsing on a test ride that hints at a warped disc.

The 636cc motor is fairly solid but there are occasional reports of gearbox issues and as on so many older bikes, reg/recs and generators do start to fail with age. As the ZX-6R still runs carbs, ensure the bike ticks over nicely or you will be looking at spending a few quid to get the carbs balanced and also inspect the fuel tap for leaks as these can fail and may require a rebuild. If it has an aftermarket exhaust fitted (most bikes will) ask if the bike has been set-up via a carb kit to suit.

In terms of the chassis, it is general wear and tear issues so check the bearings (head stock, wheels, swingarm) as well as the consumable items such as brake pads, chain and sprockets etc. and the suspension for leaks and frame/motor for signs of crash damage. The ZX-6R runs a slightly odd 120/65 front tyre, a size that isn’t very common nowadays and as a result most will be fitted with a 120/70 instead. If this is the case, just check it hasn’t been rubbing on the front mudguard. Also check the radiator hasn’t got any leaks or major stone damage to its fins as these are costly to replace and used items are often just as bad.

Overall, the ZX-6R is a solid bike, but it is also quite old now so do be on your toes when checking it over. 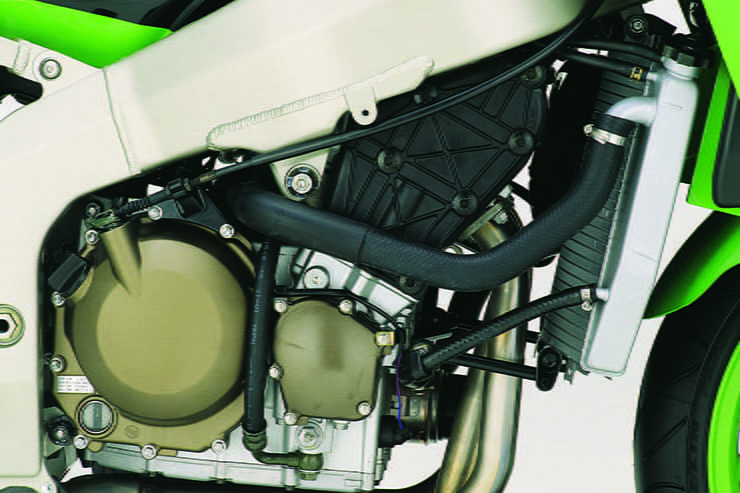 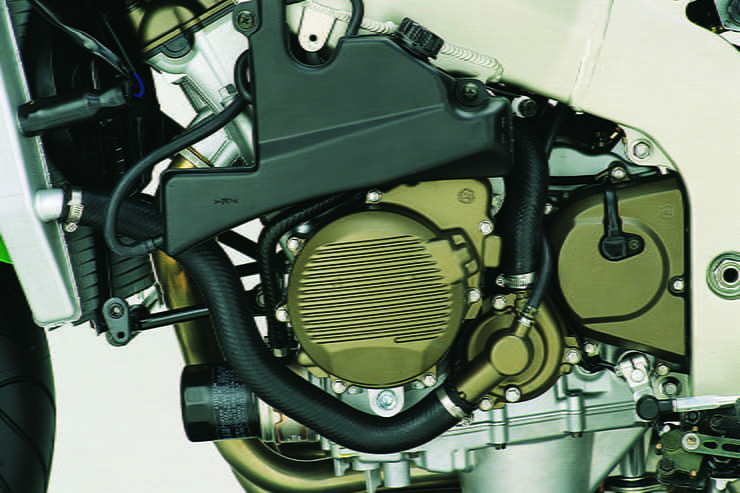 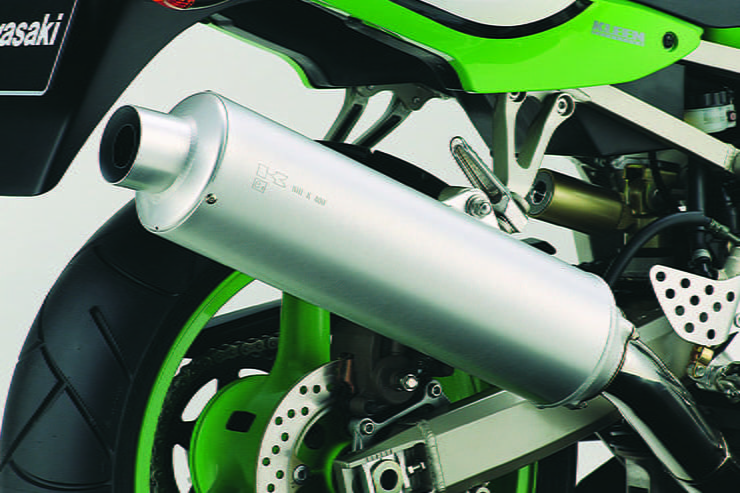 The A1 generation of ZX-6R was only around for a single year before the all-new ZX-6R B1H replaced it in 2003. Featuring a radical new look, the B1H also came with a 636cc motor but it was significantly modified to boost its performance and had a slipper clutch as standard. In addition, the 2003/04 ZX-6R featured radial brakes, inverted forks and even had a 599cc homologation special sibling in the shape of the ZX-6RR. 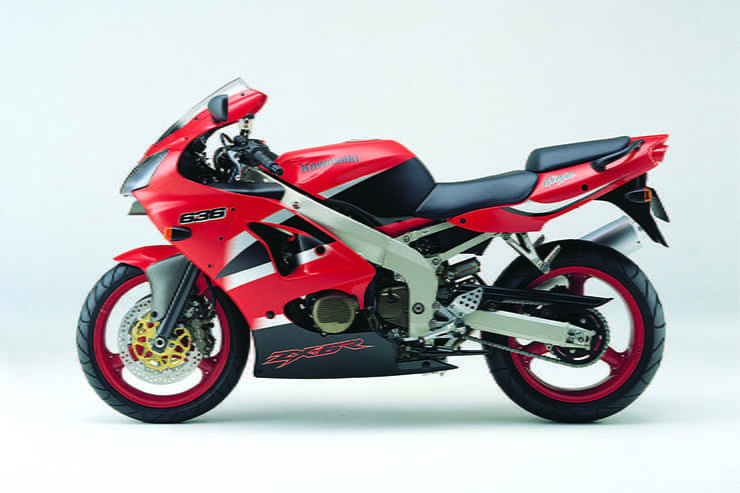 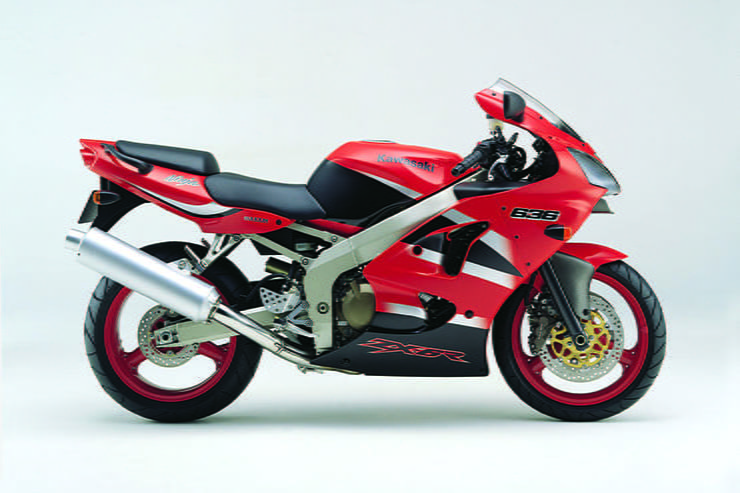 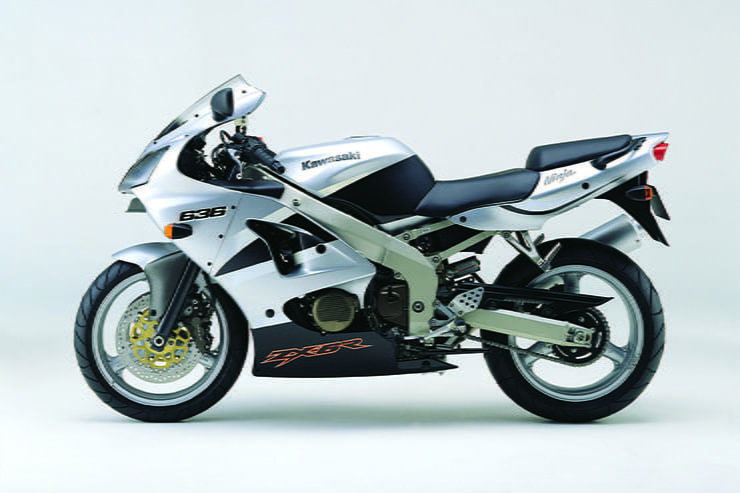 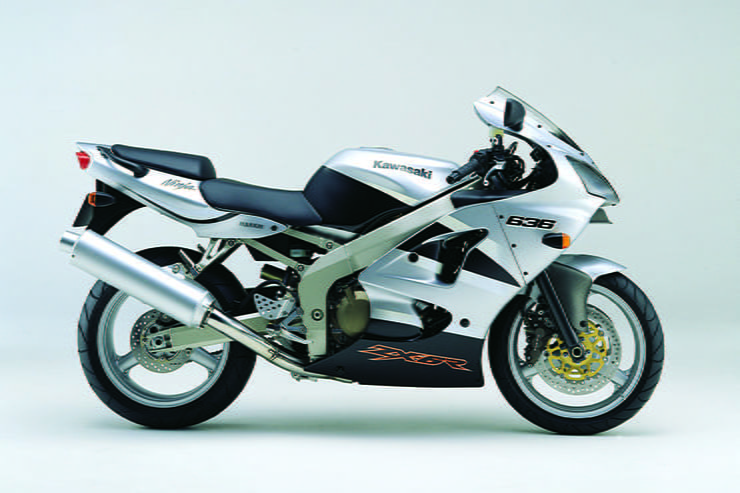 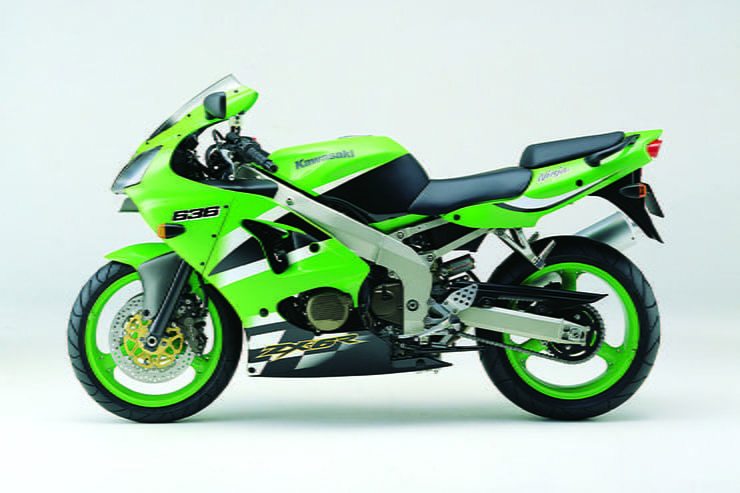 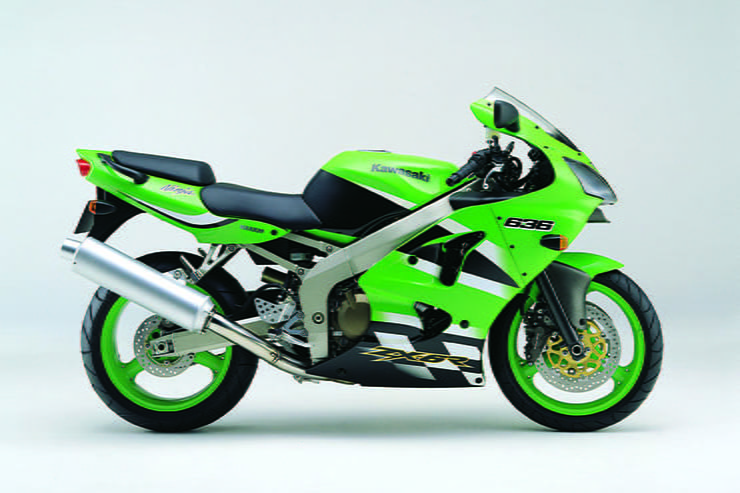 Due to its fairly dated styling, this generation of ZX-6R isn’t hugely sought after by buyers and as such has slipped into the budget end of the bike market. Which is great news if you are after a well-priced practical supersport machine. Search the classified ads and you can find a 2002 ZX-6R for close to £2,000, sometimes a touch under if you don’t mind it having a few miles on its clock. A good example will be closer to £3,000, but there should be no need to stray much beyond this barrier even when buying from a dealer. There are a few bikes up for sale with optimistic price tags of approaching £4,000, but that’s way too steep for what this bike is and at that price there are better options out there to consider. 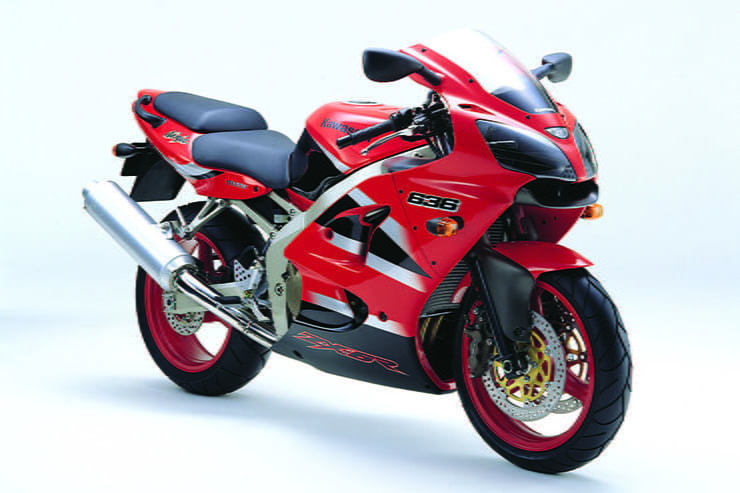 The ZX-6R is a bit of a cult bike and as such forums and owners’ clubs are plentiful. One of the most active is www.zx6r.com, which caters for fans of all models, but there is also www.zx-6r.net, www.zxforums.com and even a UK-based Ninja ZX-6R Owners’ Club page on Facebook.