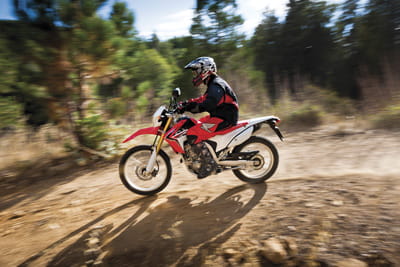 Anyone old enough to remember the days when 250cc was the maximum capacity for a learner machine will also fondly remember the hoards of trail bikes that made full use of this capacity. To the uninitiated, trail bikes were the bike to have, and anyone who didn’t try riding off-road at least once a month was regarded as a ‘scaredy cat’.

We can all relive the glorious past with Honda’s CRF250L. I haven’t had such a laugh on a bike for ages until I got on the Honda. Not because it’s a wheelie-prone mad-thing because it isn’t. The single-cylinder 250cc engine only knocks out 23 horses and is good enough for 70mph, which is plenty with nothing in the way of wind protection.

Acceleration is best described as flat but brisk and is a Honda engineering trait. This is fine for town and country road riding and quite pleasurable in a subdued way. Mix this with wide bars, light steering and the tall seat height and you’ve an elevated view from which to pick your route through traffic. This alone makes the Honda a decent commuting tool and best fuel figure of 76.7mpg underlines it. Honda claims 90mpg can be netted under controlled conditions, but riding to work is a different ball game to a rolling road.

Styled on its competition CRF brothers, this 250 catches your eye. Obviously the CRF-L is built to a price because it’s a simple road-going tool. But all he right components are there for off-road jaunts – a 21-inch front wheel and 18-inch rear as standard with semi-trail tyres allow such shenanigans and the CRF gives a good account of itself.

It’s not competition spec suspension but for serious fun the front Showa forks are more than adequate. And the front disc brake that causes the front forks to dip big time on tarmac will now suddenly overcome the front tyre’s minimal off-road grip for major front end slides. But will you care? No. Because you are having fun.

It’s hard to believe something so small but perfectly formed can put enjoyment in your life, but here it is: Honda’s CRF250L.

+ points – economic commuting tool, fun on and off-road
- points – not as performance packed as it looks