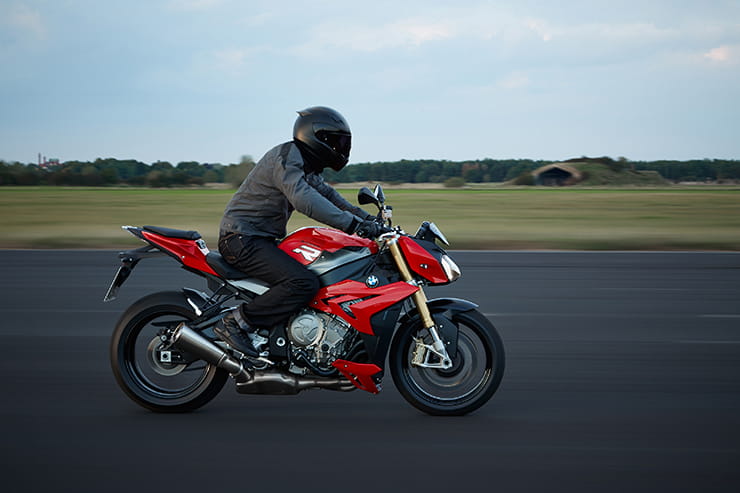 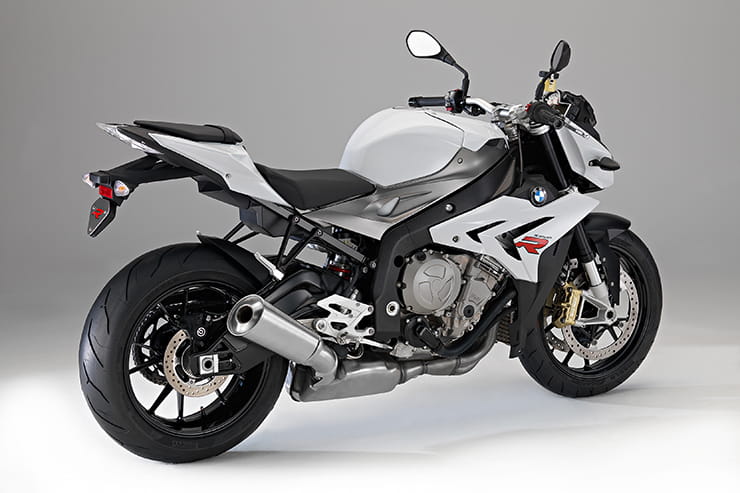 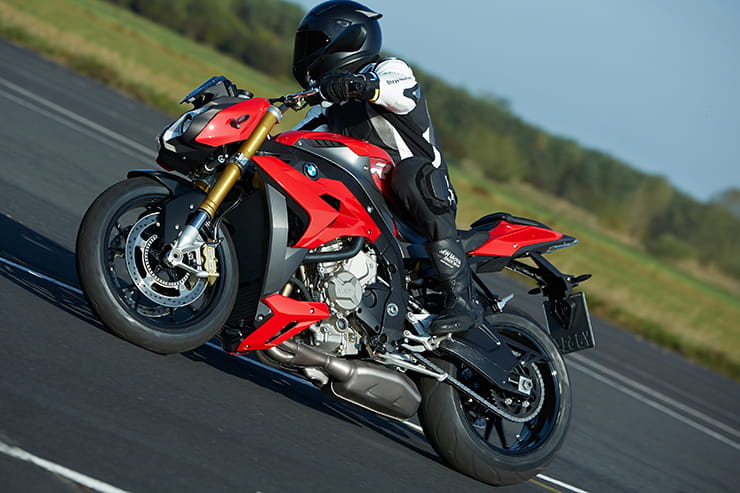 It is very easy to read about the BMW S1000R and be put off by its power figures. A lot of riders will look at a naked bike that claims to kick out in the region of 160bhp and question why on earth you would want such performance in a machine with flat bars. After all, there is only so much strength the human arms (without the muscle-boosting effect of spinach) can pack in. But that kind of misses the S1000R’s main selling point.Yes, the R is a fairly balls-out super naked thanks to its mighty inline four motor. And yes, it boasts a chassis that is based on BMW’s S1000RR sportsbike, meaning that sporty handling is a given. However, what the RR has that so many rival super nakeds lack is a full-on BMW advanced electronics package as well as a motor that doesn’t necessarily require being revved. And these facts make the R a really good roadster – as well as a bonkers super naked when the need arises…

If you aren’t in the mood for flat out sporty riding, the re-tuned RR motor is packed full of low end torque, making it very easy going and fun. It may sound fruity and aggressive, but it is far from intimidating and is actually a very pleasant, and rapid, road engine. Take this fact and add in advanced electronics such as semi-active suspension (on the Sport) and the safety nets of excellent traction control and ABS systems, and the R makes a lot of sense for riders wanting a bit of sporting potential but with a relaxed riding stance. Not only that, you can even get a range of luggage options for the R, making it a versatile, as well as bloody fast, naked bike. It is pricier than its rivals, but you do get a bike with far more features included in the package. Annoyingly, vibrations are one extra riders didn’t necessarily ask for on the original generation, but that’s a fairly small blot on its copybook and there are various damping solutions out there. 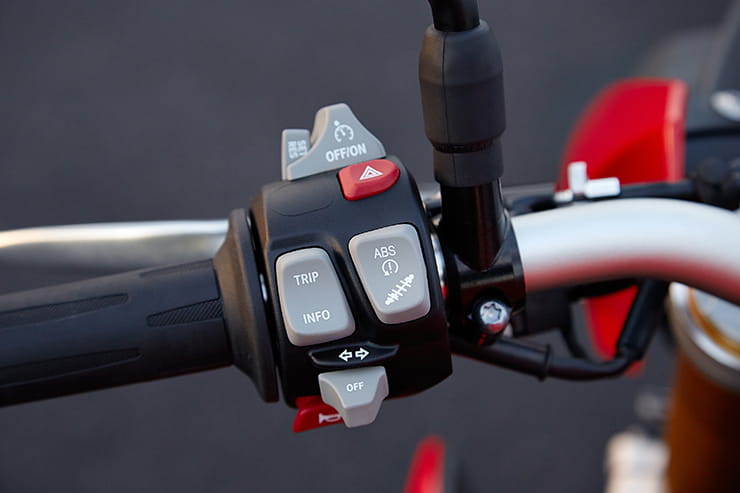 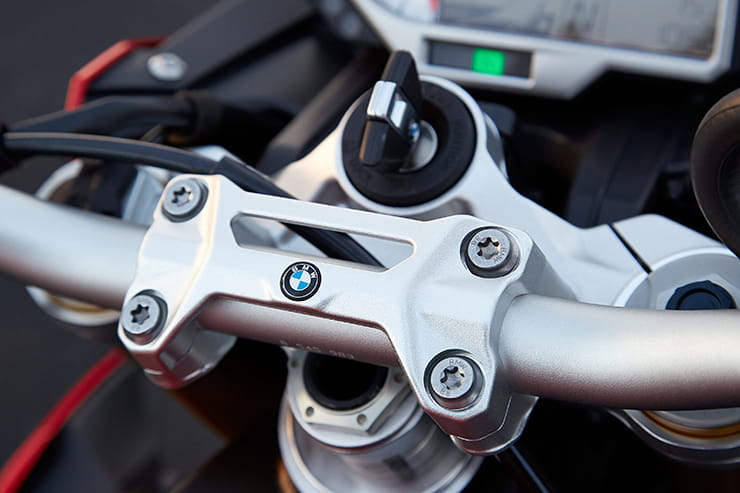 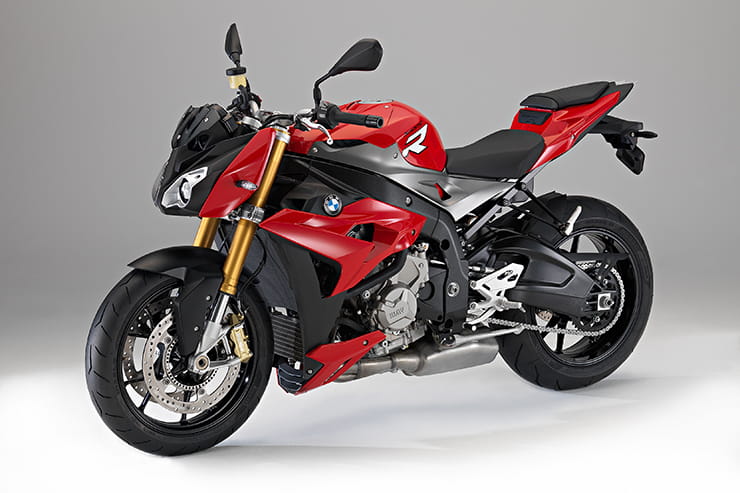 BMW have a reputation for building reliable bikes, but the truth is that a lot of first-generation models suffer a fair few teething issues, it is just that BMW are very good at sorting them out and pacifying owners. With this in mind, you do need to be a bit careful when buying a used S1000R.

The first, and often most crucial, thing to look for is a full service history. Most Rs were bought on three-year PCP plans and as the bike is fairly new, there is no reason for it not to have a full service history. If it is missing, the bike may have skipped a few of the more important updates that BMW have added over the years and is best avoided.

Next up is spec, which is always a huge issue with any used BMW. The R was sold in stock and Sport guise with the Sport adding a host of cool features that include extra riding modes (Dynamic and Dynamic Pro), a more advanced traction control system that is angle-sensitive, cruise control, semi-active suspension and a quickshifter. The more options, and this includes BMW-official EX-Works extras, the higher the price tag and many can’t be easily retro-fitted, so buy with this fact firmly in mind and be prepared to pay extra for a fully-loaded Sport.

In terms of mechanical issues, the biggest worry is the first generation’s switchgear, which has an annoying habit of failing so check all the buttons etc are working correctly. The same goes for the immobiliser’s antenna, which again is known to fail. The exposed nature of the radiator means it is prone to damage and can rot, but as the R is such a new bike any corrosion is very rare. Be aware the R requires its valve-clearances checked every 18,000-miles, which is a bigger service bill, and the brake fluid should also be swapped every two years to avoid damage to the ABS system, again at a cost. Finally, if the bike has ESA fitted always check the shock for leaks as if it fails, and they can at roughly 20,000-miles, you will need a whole new unit as it is non rebuildable – and that will set you back over £1000! 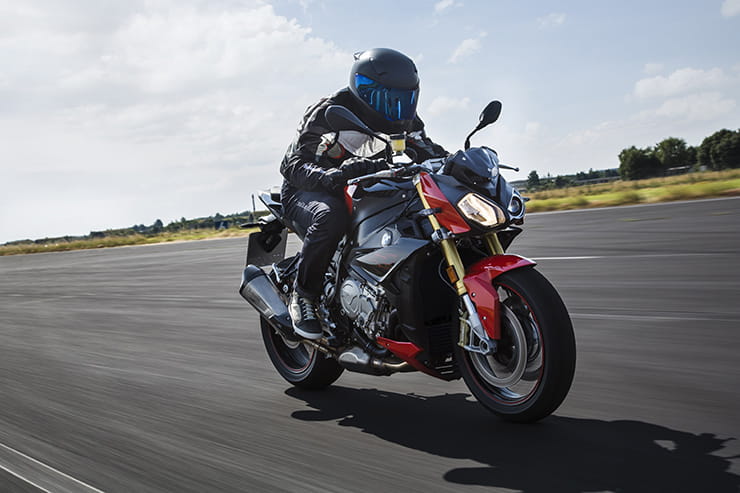 The S1000R has only been updated the once, however as it was sold in various guises (Sport and base) as well as with a spec list dependent on the size of the owner’s wallet, it can be a little confusing. In 2017 BMW made the R (alongside the XR) Euro4-compliant as well as sorting a few of its niggles out. The motor gained 5bhp as well as a flash titanium exhaust as standard while the frame was tweaked, an up and down quickshifter added and (possibly most crucially) a bit of extra damping for the rider’s wrists in the shape of vibration-free bars! Upgraded electronics also added the option of launch control and a pit lane speed limiter, while the bike’s look was also sharpened. 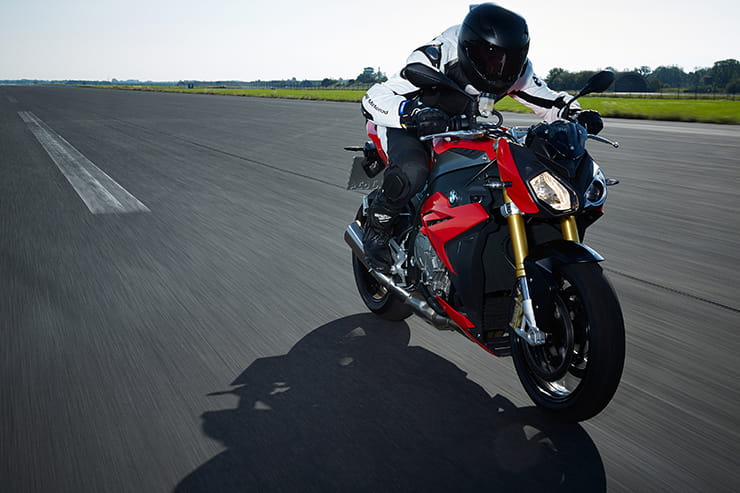 BMWs tend to hold onto their residual values very well and seldom leave the BMW dealer network, which means they can be a pricey purchase. That said, dealership to start to avoid bikes that are over a certain age and the S1000R is now beginning to crop up in non-BMW showrooms, reducing its used value slightly as a result. You can pick up an early R for in the region of £6,000, however it will be a fairly low spec model and if you want a few bells and whistles, expect to pay in the region of  £7,000 - £8,000. Prices for the updated 2017-generation start at £9,000 with a brand new 2019 S1000R costing £11,190 and £13,050 for the Sport model. 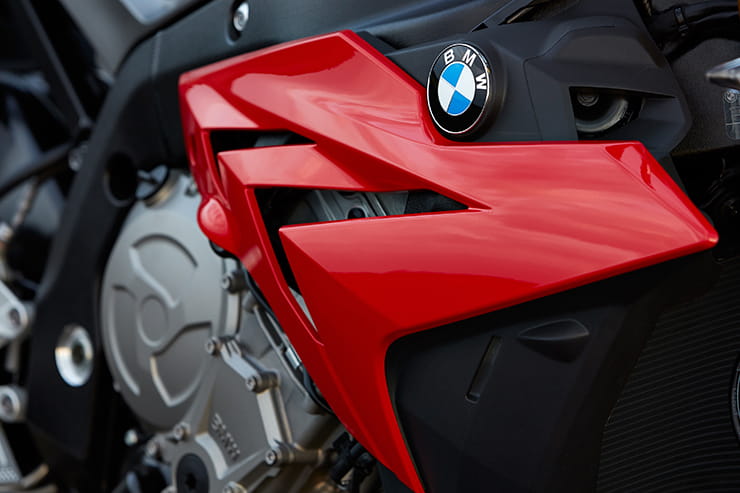 There is a dedicated S1000R forum at www.s1000r.co.uk, which is fairly active UK-based forum and worth visiting if you are experiencing any issues or want advice on bolt-ons etc. There are also a few similar forums around the world, most noticeably in America and Germany, but it is probably best to stick to the UK one for ease.