Puig: Dorna set to invest in next generation of British MotoGP talent 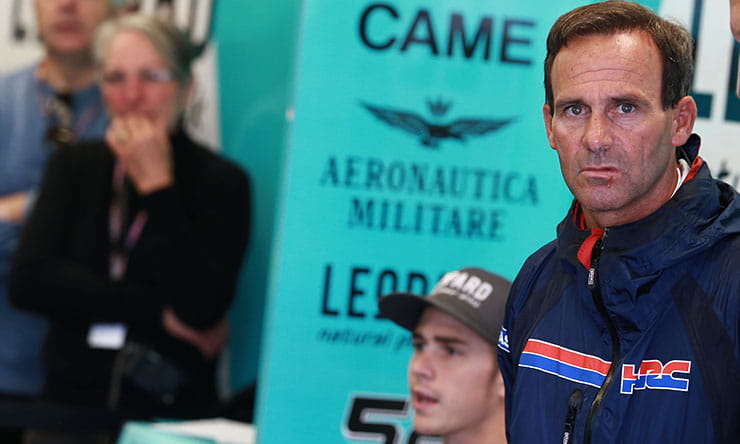 We may be leaving the European Union, but that’s not stopping MotoGP's Spanish bosses from investing in Britain, with the leading figure behind the UK’s new Moto3 team saying that the championship organisers are supporting an initiative to nurture a new generation of British world champions.

Former 500cc GP winner Alberto Puig, a key figure in the development of the careers of world champions Casey Stoner and Dani Pedrosa, has been working with series organisers Dorna to put together the new team and look at ways in which the country’s most talented riders can be fast tracked into the world championships.

The new team, which Puig (pictured above) refers to as the ‘British Talent Team’, will run 22-year-old Moto3 race winner John McPhee as the sole rider in 2017, but plans to expand the squad to two riders in 2018 should provide massive motivation for the next generation of British and Irish talent.

Dorna is supporting the new team, which is expected to run in the colours of broadcaster BT Sport, both financially and through the advice of mentors like Puig. The series promoter has put its weight behind several other regional projects in the past, creating teams, academies and indeed complete championships to help identify and nurture the best young talent, as Puig exclusively told BikeSocial.

He said: “Dorna is always trying to support and expand the possibilities for young, new riders to come and race in the world championship. In the past years we started an expansion of cups, starting in Spain with the Movistar cup. This created many good riders and then lately we did an academy and then the Asia Talent Cup, with which we are trying to promote and expand the sport in Asia due to a lack of interest in that region. We are trying to promote it and already in the third year we have created some riders like (Ayuma) Sasaki and (Kaito) Toba, guys who are going to come to the world championships.”

It’s a sad indictment that Britain, with its strong racing heritage and commercially successful domestic championship, is unable to produce a steady stream of MotoGP riders on its own, but with even two-time GP winner Cal Crutchlow barely able to make a dent on the back pages of the national press, the news that Dorna is putting its significant weight behind Britain is warmly welcomed.

“We have an interest in trying to help to promote racing in Britain,” continues Puig. “In my own opinion, it has been a very important country in the story of racing and we should try to cooperate and support them in bringing some new riders to MotoGP. We are trying to create a culture of racing again in Britain. The investment needed is massive but Dorna is a company that is really behind the sport and they are trying to support many activities all around the world, as they did in Asia and as we are planning to do in the UK. I am really thrilled about this project and I will be very happy if, in a few years, we have some pure talent from Britain and that the journey we started today was proved to be the correct one to take.”

Such has been the decline in the state of youth racing in the UK that there is currently no other eligible talent deemed ready to take up a second seat in the British Talent Team in 2017. Puig wouldn’t rule out the possibility of a cup series being introduced to the British Isles in the future, in an attempt to find and nurture talent at a very early age, but for now the focus is on identifying and bringing through the best young riders that are already out there.

He continued: “We wanted to run Rory Skinner (pictured) but at 15 he is not old enough to race in the world championship yet. We looked at (British Motostar Champion) Charlie Nesbitt but at this time McPhee is the guy who has the experience and we will start the team with him. We will hope that more riders will have the aim to race and have a target to be in the team in Grands Prix.

“We are still going to support Skinner and Nesbitt and the target is that they can also some day come to the British Talent Team. I’m also aware of Dan Jones coming through and we will ultimately look to employ an experienced ex-rider to help us scout for new riders in the British Isles, someone like Jeremy McWilliams.”

This year will see 16-year-old Nesbitt, a runaway winner in the British Moto3 championship last season, join Skinner in the Junior World Championship, the Spanish based series that is currently seen by many as the only route to Grands Prix.

“While it is not compulsory, it is clear that the level in the FIM Junior World Championship is really high,” Puig continues. “It is not about racing in one championship or another, but about raw talent. If a rider proves his talent and someone is looking then we must find a way to bring these guys to the next step. We need riders from Britain to be ready to come to Europe and try, because if they stay in the British Isles then nothing will happen. It is important to ride where the good riders are, and that is the Junior World Championship. If you perform to a high level there then your access to the world championship Grand Prix happens automatically.”

With the cost of securing a ride in the Junior World Championship well beyond the means of the families of most young riders (with a fee in excess of £200,000 often needed to secure a top ride) Dorna’s investment in UK racers is much welcomed. Not only will it hopefully save some of our most talented youngsters from being sentenced to a career in the British championships, it might actually mean that Britain will be able to finally break the 40 year drought we've had since Barry Sheene won the 500cc world title in 1977.

Who is Alberto Puig?

Along with Alex Criville, Alberto Puig led the Spanish revolution in the top classes of Grand Prix racing.

A seven year spell in 250s between 1987 and 1993 yielded four podiums, before he moved up to the 500cc class as replacement for Criville at the Pons Honda team.

Puig finished on the podium in just his sixth premier class race, finishing behind GP legends Mick Doohan and Kevin Schwantz at Germany’s superfast Hockenheimring, and he went on to take his first win at the 1995 Spanish Grand Prix in Jerez, making him the first Spanish rider to win his home race in the premier class.

Two more podiums in the next three races saw Alberto running third in the championship when he suffered a career-changing leg break during qualifying for the French Grand Prix at Le Mans. He was to miss the remainder of the year and although he came back for two further seasons, finishing 11th and 12th overall in the championships, he never regained his pre-crash fitness and retired at the age of 30.

Since hanging up his leathers, Puig has gained a reputation as a talent spotter and mentor for young riders. He helped set up the Movistar Cup in the late Nineties, whose alumni included future world champions Casey Stoner, Chaz Davies and Dani Pedrosa, whose early career he closely managed.

More recently he has worked with Honda and Dorna on a number of initiatives, including the Asia Talent Cup – a continent-wide programme that started in 2014 and is already taking a new generation of talent to the Moto3 world championships.