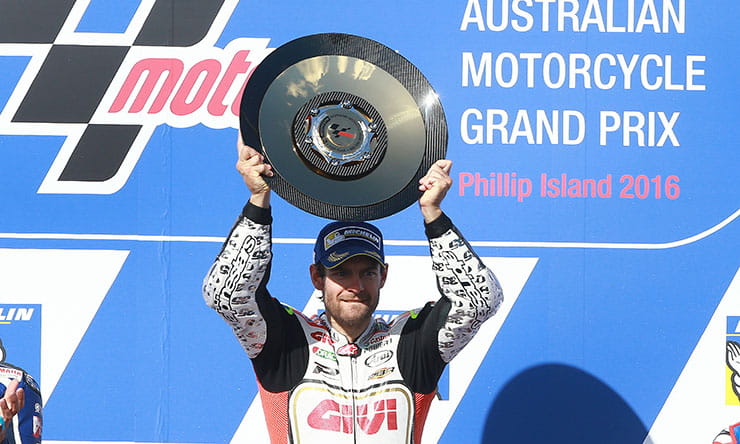 Britain’s Cal Crutchlow scored his second ever MotoGP victory with a masterful performance at the Australian Grand Prix at Phillip Island today.

Having ridden conservatively to secure the championship in the last few races, the Spaniard was back to displaying his most cavalier riding but Crutchlow, who made a sluggish getaway after qualifying a brilliant second, forced his way through the pack to provide the main challenge to the champion.

Hopes of a barnstorming race were ended on lap nine, when Marquez crashed his Repsol Honda out of the lead at the slow Honda corner. The Spaniard put the crash down to a lack of grip caused by insufficient heat in his front Michelin tyre, a common Phillip Island problem in cold conditions.

That left Crutchlow leading on his similarly shod LCR Honda and despite concerns that the Brit could suffer a similar fate, the Isle of Man-based Coventry rider gave a spellbinding display to pull away from the pack – holding a 6.3 second lead before easing off to take the win by four seconds.

The win sees Cal become the first Brit to win a motorcycle Grand Prix in Australia. He said: “I’m really pleased to come here and race in the conditions we raced in. I need to thank my team for all their work this weekend and also Honda, because they help us a lot internally.”

Cal admitted that his missed chance of a second place here in 2014 was never far from his thoughts as the end drew closer. “If Marc had crashed in turn six I would have thought nothing of it, but I crashed there two years ago with a big gap. So I spent the rest of the race thinking it was a disaster. I pushed in the laps when the sun wasn’t out, because I knew I had to keep the heat in the front tyres. I was in a good rhythm. I saw the pit board said 1.2 to Vale and I thought ‘please he’s not coming from 15th…’  But I had some flashbacks from a couple of years ago, there’s no doubt about that.”

Second place went to Valentino Rossi on the Movistar Yamaha. The Italian legend rode a hard race from 15th on the grid, scything through the field and hitting the podium places by lap 10.  Ultimately it was not enough to catch the leader but did go some way to helping the Italian as he fights an inter-team battle with Jorge Lorenzo, who rode a lonely race to sixth place.  “This morning when I woke up I was already happier when I opened the curtains. And the warm up gave me a lot of good power and I knew I had good pace and that I could get on the podium. I think the first 10 laps were really good. When I arrived to Cal, he was my target because I was a bit stronger than him this morning but he was too strong.”  The runner up spot means Rossi extends the gap to Lorenzo by 24 points heading into the final two rounds.

Rounding out the rostrum was Yamaha bound Maverick Viñales, the Suzuki man moving to within 11 points of third placed Lorenzo in the championship. He added: “The battle was strong today. In the first laps I wasn’t feeling very confident with the front and it was difficult to believe in the front tyre, but once I did I started to move forward.  On one lap I overtook two riders and that was great, but then I realized I could get on the podium and I was battling with Dovizioso and Aleix.  After the disaster in the pitlane yesterday it’s really good to get 16 points.”

BikeSocial’s own Scott Redding struck a blow in his points fight with team-mate Danilo Petrucci as the pair are locked in a battle to take the keys to a Ducati GP17 ride in 2017, with Redding taking seventh while the Italian had to settle for ninth behind Bradley Smith, who impressed in his second race back from injury on the Monster Tech 3 Yamaha.

Repsol Honda stand in Nicky Hayden rode a solid race, placing in the top 10 until a robust move from Jack Miller skittled the Kentucky Kid out of contention.  He re-mounted, eventually finishing last of the classified riders but still impressing in his second MotoGP ride of the season.