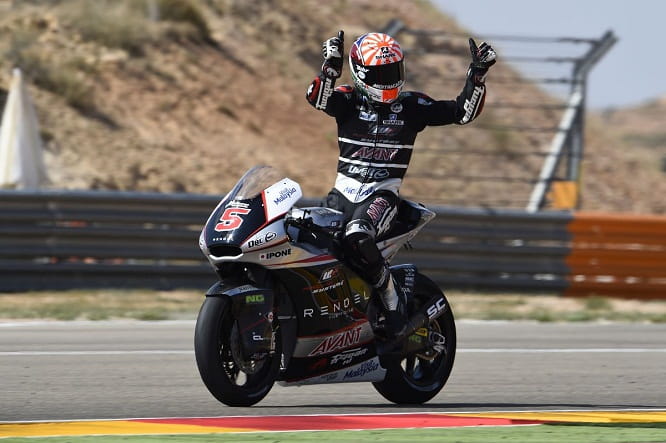 Rabat trailed Zarco by a whopping 78 points heading into the race weekend, meaning that the Frenchman would be crowned champion if the gap remained above 75 points.

Rabat broke his arm in a testing crash at Almeria before flying to Japan, but was determined to at least try riding on Friday morning. However, after trying to take to the track in FP1 the Spaniard has opted to sit out the remainder of the weekend, meaning Zarco could be crowned as champion.

“For sure it’s bad news for Tito but good news for me,” said Rabat speaking in Japan. “I’ve spoken to Tito and shaken his hand, it is a shame for him and he explained the problem he had. For me I cannot enjoy too much on the Friday, it is necessary to keep the concentration as I am always on the limit. I want to finish well in the race, I will try to win and then I will celebrate the title. It’s good to ride with a little bit less pressure but it’s good to keep the pressure up as if I relax too much I could make mistakes!”

Zarco’s title comes after a frighteningly strong season, which has to date only seen him finish off the podium twice this year. With six victories, the Frenchman has taken three times as many wins as any other rider.

Congralating the new champion, Rabat said: "I am disappointed we weren’t able to fight to the end, but congratulations to Johann Zarco on the championship. He’s ridden a faultless season and will be a worthy champion.”

Zarco will become just the second rider, after Rabat, to attempt to retain the Moto2 crown next year, after turning down a number of MotoGP options to remain in the intermediate series. However, Zarco has said he will not use the number 1 plate, instead opting to remain with #5.