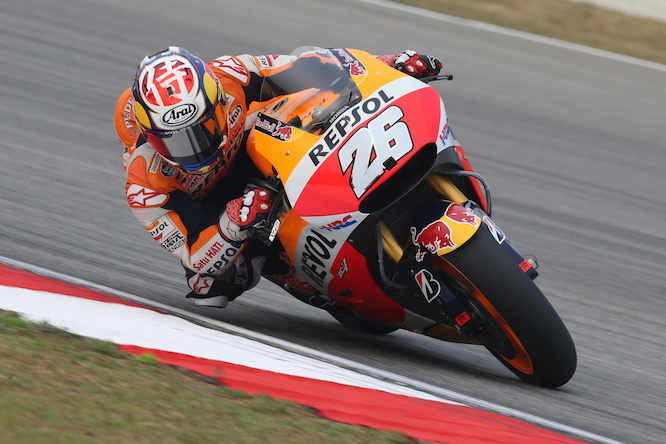 Dani Pedrosa will start on pole position for tomorrow’s Malaysian Grand Prix after outpacing the rest of the field by almost half a second in qualifying.

Marc Marquez starts in second while Valentino Rossi took third after knocking title rival and team mate Jorge Lorenzo off the front row in the closing moments of the session.

Pedrosa’s time of 1’59.063 blitzed the circuit fastest lap by some seven tenths.

Championship leader Rossi had looked to be off the pace but he found something on his final run to outpace Lorenzo in the final few sectors.

Lorenzo thought he’d done enough for the front row and headed to parc ferme at the end of the session only to be waved away by race officials.

Britain’s Cal Crutchlow will start alongside Lorenzo on the Castrol-backed LCR Honda with Andrea Iannone competing the second row.

Maverick Vinales continues his recent form with a strong seventh place ahead of Bradley Smith and Hector Babera, leading open bike in 10th.

The Espargaro brothers round out the top 12, with Aleix on the Suzuki ahead of the Tech 3 Yamaha of Pol.

Despite showing pace across the weekend, Scott Redding will start the race in 15th behind Danilo Petrucci and Stefan Bradl.