Rossi: "We did something amazing" 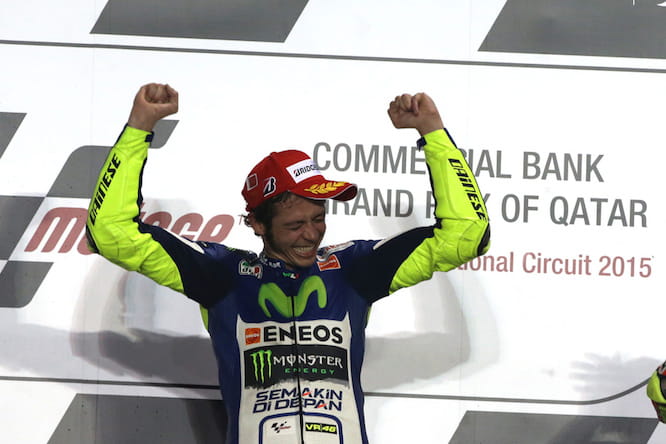 Valentino Rossi has hailed his epic Qatar battle with Andrea Dovizioso was one of the best races of his career.

Despite struggling throughout practice, qualifying in eighth place and getting a bad start, Rossi fought through to join the leading duo of Andrea Dovizioso, Jorge Lorenzo and Andrea Iannone.

The Italian waited until lap 19 of 22 to move into the lead and when he did, Dovizioso didn’t make life easy for him. Lorenzo had slipped out of contention after a loose helmet lining obscured half his vision.

Dovizioso appeared to have the speed on the drag out of the final turn meaning Rossi had to build a big enough gap in the turns before. On the penultimate lap, Dovizioso outdragged the Yamaha to the line in what looked like a dress rehearsal, but soon went wide at the first turn leaving Rossi enough space to pull his gap. The Ducati couldn’t quite get close enough and crossed the line 0.1seconds behind the nine-times world champion.

"In the last three seasons I always rode solid races and arrived on the podium but to come back with a victory is another thing" said Rossi. "I am so happy because we suffered a lot during the practices and also the tests, but we worked very well for the 22 laps race and I was very strong. First of all you have to be lucky, but especially the work that we do with the team during the weekend makes the difference for my pace in the race. It was definitely one of the best races of my career, considering where we were yesterday. I really have to thank all my team, my engineers and all at Yamaha because I think today we did something amazing.”