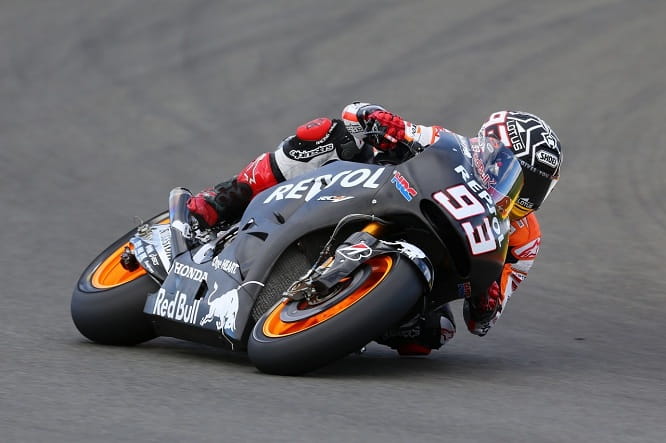 MotoGP World Champion Marc Marquez has started the 2015 season where he left off by storming to the top of the timesheets on the first day of testing in Sepang.

The cheeky Spaniard knocked Yamaha’s Valentino Rossi off the top spot with just five minutes of the session remaining with a fastest lap time of 2.00’262. Carrying through his impressive form from last season, Rossi sat comfortable in second almost two tenths ahead of team mate Jorge Lorenzo.

Andrea Dovizioso was fourth on Ducati’s GP14.3, with the GP15 not available until the second test, ahead of the second Repsol Honda of Dani Pedrosa.

Brits Bradley Smith and Cal Crutchlow, who took an early tumble, rounded out the top ten.

Scott Redding jumped up the timesheets towards the end of the day to post a time just two tenths off Crutchlow on the first satellite Honda.

One of the stories of the day was Alvaro Bautista matching Espargaro’s time on the all new Aprilia MotoGP bike despite a flurry of technical issues. His team mate Marco Melandri wasn’t so fast, sitting 26th on the timesheets.

The fastest Honda RC213V-RS was Nicky Hayden in 17th place with MotoGP rookie Jack Miller just a tenth behind the Kentucky Kid.