Ducati GP boss: ‘We have still not achieved our real objective’ 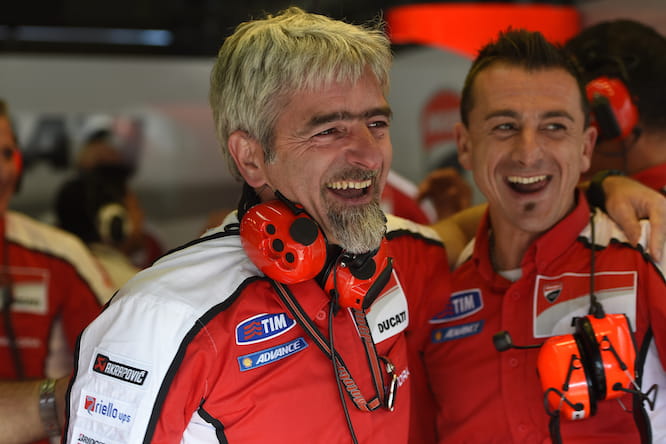 The man behind Ducati’s Desmosedici GP15 has said while his team are more relaxed after the strong results in Qatar, they still haven’t achieved their ‘real objective’.

Ducati haven’t won a MotoGP race since 2010 and have only taken a handful of podiums in favourable circumstances in the last few years. This season the Bologna factory has introduced the radically re-designed GP15, which has been competitive from the off with Dovizioso challenging for victory until the chequered flag in the first race at Qatar.

“After Qatar the atmosphere is absolutely positive,” said Ducati Corse General Manager, Gigi Dall’Igna. “We celebrated our first two podium places and I must say everybody’s expressions were extremely satisfied and upbeat. We have so many developments in the workshop but before we work on them we first need to understand the bike better and try what happens when we make certain adjustments.

“We weren’t sure what we could do with this bike because before the race we hadn’t managed to do 22 laps of the track and this was clearly a big unknown factor for us.”

Despite the notable improvement, Dall’Igna says Ducati will now work towards achieving both their 2015 and long-term goals, which is ultimately to win the MotoGP World Championship.

“All of us at Ducati Corse are now surely more relaxed,” he continued. “Although ‘relaxed’ is not really the right word since we have still not achieved this season’s objective which is to win at least one race and because we need to bring forward the technical development of the bike until we achieve our real objective. Last year our goal was to finish no more than ten seconds behind the winner, this year the goal is to win at least once race but these are all interim objectives, clearly we shall not be satisfied until we achieve our main objective, which is to win a World Championship.”

The second round of MotoGP kicks off later today in Austin, Texas. For all the TV times click here.