VIDEO: McGuinness: "I thought my season had gone down the toilet"

TT legend John McGuinness has said he thought his season had gone down the toilet or even worse, that his career could have been over when he was laid on an array of rocks after the enduro accident which saw the Morecambe Missile break his wrist.

“When I clobbered that rock it sort of sparked me out! When I came round I knew I’d done a lot of damage.” McGuinness told Bike Social. “I was in a bad world; all I could think about was that my season had just gone down the toilet.”

Speaking at Honda’s recent test with tyre manufacturer Dunlop at Castle Combe, McGuinness confessed to being a bit nervous about heading out on track for the first time on his 2014 Fireblade just under two weeks before the North West 200. “To be here now, I’m really nervous to be honest. It’s the first test on the new bike, I’ve not been out before but when I went out this morning it wasn’t actually too bad and once the adrenaline started flowing it was great”.

With a new bike for the first time in five years, McGuinness explains the difference between old and new and explains exactly what the team are testing at the Wiltshire circuit. 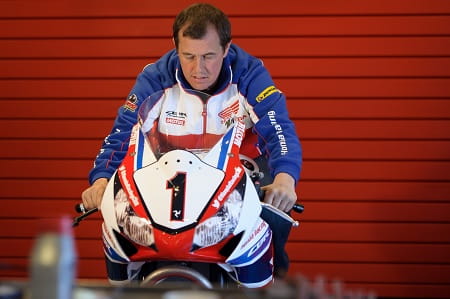 “You can’t beat new! Honda have brought this new SP out which is a big step forward in roadbike trim and that’s what our bike is based on. We’ve been running the same bike since 2009 and we’ve been doing OK and winning races but a few other boys have now gone in different directions with new, fast bikes so we needed to move forward too”.

Talking about his rivals, McGuinness touches on how he thinks Michael Dunlop will go on the BMW and shrugs his shoulders at the mention of Guy Martin. “Dunlop has switched to another manufacturer but if anyone can win on one it’ll be Michael. He will grab it by the horns and wrestle it into submission.

“What can you say about Guy Martin? It’s about time he won one really. I’m sure he will, he’s probably in a bit of a better place this year with doing the Bol d’Or.”

Want to know who else McGuinness thinks will be challenging come that first week in June? Watch the above video interview for that and more, including further details on his enduro accident, testing, the North West 200 and his pre-race rituals!