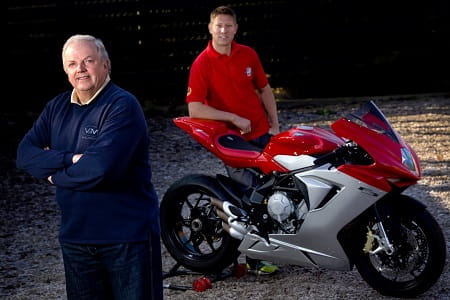 Jack Valentine has told Bike Social that he is not finished with the MV Agusta project he became involved with last year, which saw Gary Johnson take ninth place in the Supersport TT on a Valmoto powered F3 675.

Valentine championed MV Agusta’s iconic return to the TT last year under his own team, Valmoto and despite the F3 675 being a brand new bike, it took a top ten finish in the Supersport TT.

Unfortunately the Italian factory haven’t been able to pull things around on time in order for Valentine’s team to run at the TT this year, but the former Crescent Suzuki team boss has said it is still his intention to run with MV Agusta’s somewhere at some point this season, whether it be on the roads towards the end of the year or in the British Supersport class.

“I won’t be at the TT this year unfortunately; at least with a bike anyway!” Valentine explained talking exclusively to Bike Social.

“It’s a bit sad really as we started a new project there last year with the MV Agusta. It was always going to be a tough one with not getting the bike late and a brand new motorcycle will always cause a few issues but due to the bad weather at the North West [200] we didn’t get the testing time that we needed to for the TT really.

“We did go to the TT with a good bike, it was handling well and we’d got our head around the electronics but the bike was quite down on horsepower. I was hoping for a top six but in the first race we had a serious engine issue and I was hoping that it was just a broken valve as these things happen. I put it down to that and we carried on, Gary [Johnson] was ninth in the second race not too far from eighth with Guy Martin just two tenths ahead. In all it was a good campaign and I knew that there was so much more to come from the bike and Gary was happy.

“We worked on the bike after the TT and got some more horsepower before going to the Ulster Grand Prix. Unfortunately there we had two catastrophic engine failures there coming from the top end, so we were absolutely gutted as we were also going to run it at the Manx with a proven runner.

“Afterwards, I had a serious chat with MV Agusta who I’d been in touch with through it all and they were genuinely very happy with what I’d done. We had a really good meeting and they said they’d sort us out for 2014 with parts. However it’s all taken quite a while for it all to materialise as MV wanted it all to be perfect.

“Gary was asking what was going on and the plan was to continue with him at the TT but in the end with time ticking I made the decision not to go out with this bike until it’s all together, making the horsepower I know it can make and we’ve had chance to test it. Unfortunately this wasn’t possible so  I was unable to firm anything up with Gary so he’s gone down another path, which is no problem and fortunately he’s keen to test the bike again when its ready as he knows it’s got potential as we’ve seen recently in the World Supersport championship.

“It’s disappointing as I wanted to have the bike completely finished before Christmas as we were then going to look at bringing in a Superbike or a Superstock bike. I couldn’t commit to sponsors and the like until the bike was ready so in the end I decided that we’d wait until it’s sorted.

“We’ve got the parts now but I’m not in any mad rush as the season is over for us really but I might try and get it out at the Ulster if there’s a good runner we can put on it. Who knows? The bike is fully legal for British Supersport so maybe we can get it out there come mid-season if we can get someone suitable on it. The main thing is to get it back to the level of performance I know it is capable of.

“In the meantime I have been working on other things as it is my intention to be back whether it’s with this project in the road racing or another short-circuit project, whether it be British or World Superbikes. I’m working as hard as I can on that and that’s what’s keeping me busy!