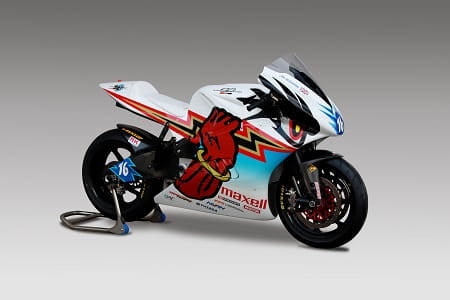 The team mates flew to Japan and rode both versions of the ultra exotic electric bike at the Sodeguaura Forest Raceway, near Tokyo.

The exclusive closed-door test was Bruce Anstey’s first opportunity to test the bike as the Kiwi joins McGuinness in the Mugen outfit this year. Also on hand was former HRC works rider Hikaru Miyagi who has been developing the Shinden electric racer through the winter.

Team Mugen team boss Colin Whittamore said: “On arrival at the circuit the riders were greeted by the Mugen team personnel and the 2 x Mugen Shinden san (three)  2014 machines as well as one of the 2013 Shinden ni (two) bikes."

He added: "As this was the first experience of an electric racing bike for Anstey he was out first on the 2013 bike for some familiarisation laps, and then moved straight on to his first taste of the bike he will race at this year’s TT Zero event. Last year's bike was impressive but the rider instantly picked the improvements in performance and handling of the 2014 machine brought about the new motor, battery and controllers, and new suspension from Showa.”

John McGuinness has ridden the Mugen in the TT zero for the last two years, although twenty-time TT race winner has never taken the zero honours, having been beaten by Michael Rutter in his two attempts. 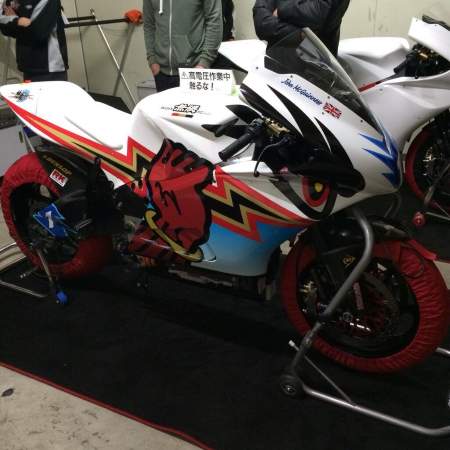 Rutter won’t compete in the race this year and McGuinness is gunning for both victory and the lap record. The record currently stands at 109.675mph and is held by Rutter on the MotoCzysz last year. McGuinness' best lap on the Mugen last year was 109.527mph.

Whittamore continued: “With 2 years’ experience of the Mugen Shinden EV machines already under his belt John McGuinness knew the benchmark of the previous bikes, but was instantly complimentary about the advancement he could feel with the 2014 challenger.

“Over the 2 day test all bikes ran without a hitch and the team were instantly benefitted by the additional data provided by having a 2-rider team for this year and were able to run through a varied test programme of various motor settings, suspension set-ups, and alternative aerodynamic components.

“Although the bikes were never optimised for the relatively short straights of the Sodeguara circuit, and times were deemed irrelevant, the performance of the bikes on the circuit was impressive and bodes well for a good performance at TT Zero 2014.

“With the bikes signed-off by all riders at this final domestic test they are now ready to be crated-up and flown to the UK for further testing before heading off to the Isle of Man at the end of May.”

The Mugen TT team will test at Castle Combe ahead of TT raceweek kicking off on May 31st.

To add a comment to this article, please or !