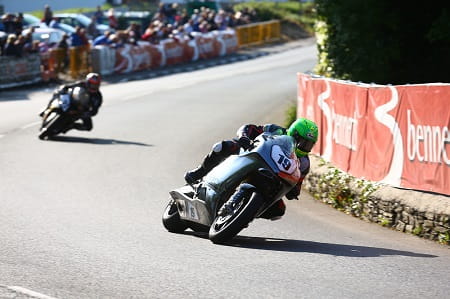 Cameron Donald’s hopes of taking a strong result on Norton’s SG3 in today’s Superbike TT race were dashed when the Aussie was forced to retire with a technical problem on the third lap.

Donald says it wasn’t a particular major issue, but the bike was cutting out and then cut out altogether and refused to restart, ruling them out of the race.

“It’s disappointing because it was just a minor problem” said Donald, speaking to Bike Social after the race.

“We’re not sure if it was the fuel pump or an electrical problem but the bike cut out a couple of times and then it didn’t want to restart to the race was over for us. It did restart eventually so I could get it back to the pits so we don’t think it’s anything catastrophic, just a minor issue that stopped us in the race.

“The bike had minor issues from the beginning of the race but then it got worse as it went on. It was disappointing because we’re confident that if we get it right we’ll be able to move a long way forward which is where we want to be. We’ve just got to keep working.”

The Norton SG3 is a brand new prototype that has been developed in Norton’s Donington Park factory over the last year and with two big-bike practice sessions being cancelled in the week, the SG3 is seriously lacking track time.

“We are improving the bike in every session but we’ve got a long way to go; we’re not where we want to be. It is improving all the time, the team are working well and they’re being methodical in the changes and we’re working through each problem as we’re confronted by it. We just need more laps and more time. Now we are at the pointy end of the week it’s tough but we’ve got to get our heads down and keep working for next Friday.”