Suter 500cc two-stroke to race at Isle of Man TT 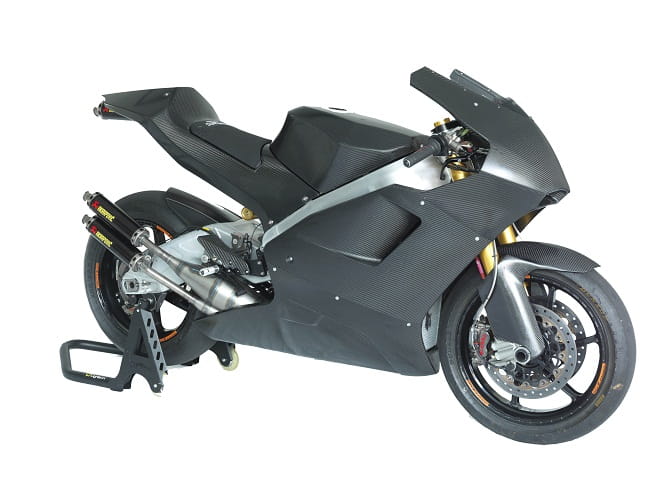 Suter’s MMX500 two-stroke GP bike is set to appear at this year’s Isle of Man TT.

The 195bhp ‘modern’ two stroke was unveiled by the Swiss marque, famed for its racing heritage, with a specific focus on classic events such as the World Grand Prix Legends event, which first took place at Jerez last year.

Now, Isle of Man TT bosses have confirmed the 130kg MMX 500 GP will make an appearance at this year’s TT races, taking on the 37.73-mile mountain course in the Superbike and Senior races.

“We have a phenomenal power to weight ratio,” said Eskil Suter, the firm’s owner and ex-GP racer. “She drives like a bicycle with rocket propulsion. In the near future we’ll try to bring the Suter MMX 500 in a road version, and that’s the reason we want to go to the toughest road race in the world. This is the perfect testing ground.”

Currently the rules only permit four-stroke machinery to enter the aforementioned classes but a disclaimer in the rules does also state other machines ‘can be admitted at the discretion of the organisers’.

Such dispensations are not unheard of. Norton were granted approval to run their 1000cc V4 prototype in the Superbike category despite the machine not being present on the FIM’s list of homologated motorcycles.

Confirming the entry, TT boss Paul Phillips told Bike Social: "We have a rule in the TT Regulations that allows an entry from non homologated motorcycles into the Superbike and Senior Races subject to the approval of the organisers. This rule allows us to bring in bikes such as the Norton and now the Suter which generate a lot of interest with the fans, and already you can see from the reaction today, that  Suter definitely fits that bill. It's an incredible piece of engineering and like all TT fans I can't wait to see and hear it on the TT Course in May and June."

Suter’s marketing director, Phillip Soutter has confirmed the firm are talking to two former TT race winners with a decision on rider choice set to be made and announced soon.

The MMX 500 has been developed by Suter’s racing division and despite being brand new, the it’s said to retain the ‘tarmac-shredding soul’ of original two-stroke GP machines. The 576cc V4 produces 195bhp while the bike weighs in at just 127kg, meaning the power to weight ratio is remarkably similar to that of an original 500cc Grand Prix bike.