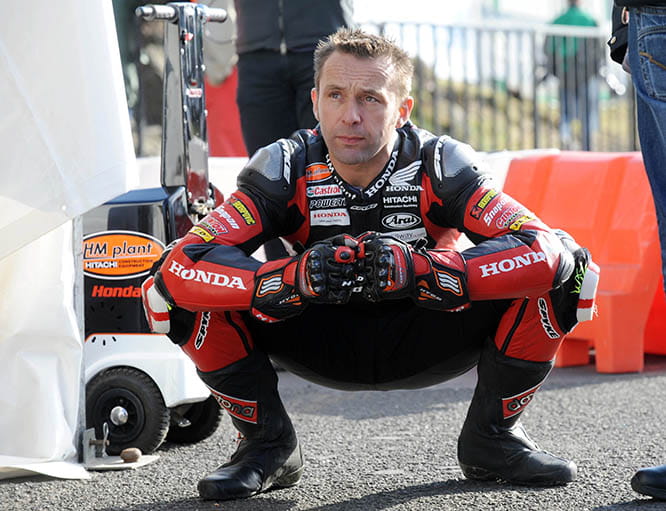 Steve Plater is a man who knows a thing or two about the TT. As well as winning the 2009 Senior TT, he’s well known for his role as an analyst and commentator on ITV4’s excellent TT coverage. So who better for us to ask for a view on who’s looking hot at this year’s event.

“It’s a bit of fun to guess the winners of any race but if you rolled up a load of notes, had to predict the winners at the TT and the result paid your mortgage at the end of the month, then it becomes a more serious matter. So if you had to gamble your house, then for me it’s a three horse race this year….

“Before that though, just to state there are probably 10 guys who could stand on the podium. But for me the three men who could dominate TT2016 are; John McGuinness, he’s the lap record holder and could be the man again, especially for the Senior. Michael Dunlop, he is the man who even if there are issues he can ride round them, which makes him the hardest man to beat, and of course Ian Hutchinson who is back to his very best after all of his injuries.

“There are five guys now who have done 132mph laps- McGuinness, Dunlop, Bruce Anstey, Guy Martin and James Hillier, but actually that should have been six, as Hutchy ran on at Signpost last year.

“McGuinness has done 133mph from Ballacraine to Ballacraine and there’s no reason he couldn’t go even faster. The thing about John is he could be asleep all week then suddenly go for it in the Senior like he did last year. So he could be a winner or he could struggle, its really hard to know to be fair.  All the kids are getting faster and stronger and arguably it is a bit of a BMW roadshow (Dunlop and Hutchy) so him and the Honda need to be on the top of their game.

“On the Superstock bike the BMWs are the bike to beat so that’s Dunlop, Hutchy and Lee Johnston plus Michael Rutter. Hutchy could be the favourite, especially with him riding it in the British Superstock Championship.

“Hicky (Peter Hickman) is riding really well the only question mark is the bike, as maybe the Kawasaki needs more time in testing.

“In Supersport, it’s Hutchy again, plus William Dunlop. He’s an unknown as on his day he could be one of the main men. Gary Johnston, now he’s hard work. Hard work to predict, hard work to understand sometimes. Very capable but unpredictable.

“Bruce Anstey, what an enigma. And of course he will be on the MotoGP replica RCV, so nobody knows how that will work. Last year he was so fast in the Superbike opener then nothing else. But great in Supersport on his day also.

“In the lightweight class one of the favourites, Ryan Farquhar, is obviously out with injury. Ivan Lintin is at one with that bike, that’s his speciality and he was the man at the North West 200. James Hillier is good on one also, so there are a few guys who could win that one. Bring it on! “