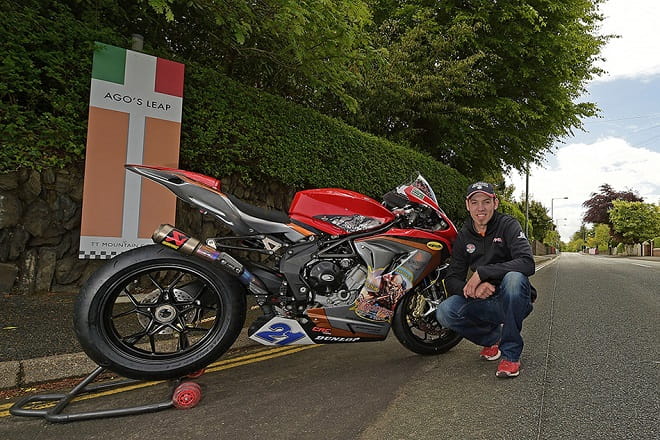 Peter Hickman will compete in the supersport classes at this year’s Isle of Man TT on an MV Agusta supported by Iron Maiden-owned beer brand, Trooper.

Hickman, who achieved the title of the TT’s fastest ever newcomer last year with a lap speed of 129.104mph in the Senior race, will ride a Jack Valentine-prepared MV Agusta F3 675 in his existing Lee Hardy Racing team.

The bikes are the same as those Gary Johnson competed aboard at the 2013 TT, plus a series of updated parts including engines built by legendary engine-tuner Jack Valentine.

“I’m really looking forward to getting out on the 675 as I’ve never really ridden a supersport bike before, but I think it will suit my style! I’ll first ride it in tonight’s practice session so I’ll soon find out! I’ll take the stocker out first to remind myself where I’m going and then come in and jump on the MV for another lap.

“Securing Trooper beer as a sponsor is mega, Iron Maiden are huge so it’s brilliant to have their backing. The bike looks great and hopefully it’ll run a treat. We’ve got a strong package so I can’t complain.”

Hickman will ride a BMW S 1000 RR in the Superbike and Superstock classes with the Lee Hardy team under Briggs Equipment colours. The British Superbike race-winner will return to action at the TT for the first time since his 150mph horror crash at Oulton Park at the beginning of last month.

Just two years on from its launch in 2013, Trooper Beer - a collaboration between rock legends Iron Maiden and Robinsons - is already on the brink of becoming a top 20 ale.

Can the Fastest Ever Newcomer stand on the podium in 2015?