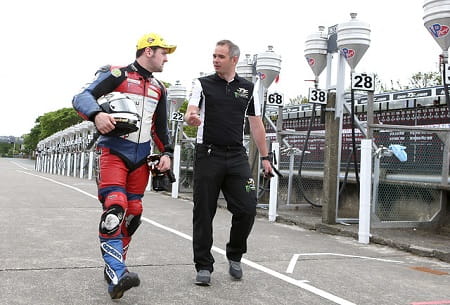 Classic TT bosses are unconcerned about the date clash with next year’s British Grand Prix, suggesting it could even leave them in a better position for the 2015 event.

Since its re-brand two years ago, the Classic TT has been run over August Bank Holiday weekend and the 2015 dates are set to remain the same despite a clash with the largest event on Britain’s motorcycle racing calendar; the British MotoGP, which will retain its last-weekend-in-August slot despite a move to Donington Park.

The British Grand Prix was moved to the last weekend of August in hope of better weather after a number of wash-out years at Silverstone. With sunshine for the last two years, the move paid off and will stick as the Grand Prix moves to Donington Park.

The date has forced organisers of the British Superbike Championship to move the Cadwell Park round from its traditional Bank Holiday slot. While this move has been unpopular with superbike fans, Paul Phillips, the Isle of Man’s Motorsport Development Officer, sees it as an opportunity, as many riders usually unable to compete at the Classic TT because of the British Superbike clash now have the weekend free.

Phillips said: “My initial reaction is that whilst any date clash is regrettable, it is almost inevitable and for the first two years of the Classic TT we have had a direct clash with the British Superbike Championship round at Cadwell Park including the Bank Holiday Monday”.

He continued: “So the situation we have for 2015 perhaps offers some opportunities as many of the riders who normally race BSB and would have liked to have took part in the Classic TT in the past will now perhaps be able to come and get involved which will be great. We won’t now have any clash for the Bank Holiday Monday either which will therefore offer us an opportunity to attract visitors across for that day along with media on the back of the GP, who we might not have been able to attract previously.”