McGuinness: 'You can't win them all'

John McGuinness has told Bike Social he’s written off any chance of winning at this year’s Isle of Man TT races, with the exception of the TT Zero electric race in which he expects a strong challenge from New Zealander, Bruce Anstey.

McGuinness is struggling with a wrist injury he sustained in an enduro accident just under two months ago. The twenty-time TT winner has endured a tough start to this year’s event, taking seventh place in the Superbike race, ninth in Tuesday’s Superstock race and just fifteenth in the Supersport race on Monday. McGuinness has said it’s not all his wrist though, stating he’s suffering with low confidence too.

“The wrist is holding me back a little bit to be fair” said McGuinness, talking to Bike Social on the Isle of Man. “The results haven’t been what we’re after but I’ve done my best and I’ve been honest with everybody.

“The Superbike result was OK, we weren’t a million miles away, I could have probably ridden a bit better in the Supersport race but I had a bit of a confidence issue really. With the 600 you’ve really got to push hard and dig deep whereas with the big bikes, even though they are pulling you everywhere, they’ve got a lot of power so if you point and squirt you’re OK. With the 600 you’ve got to carry a lot of speed and it’s fair to say that I rode like the district nurse on Monday to be honest! 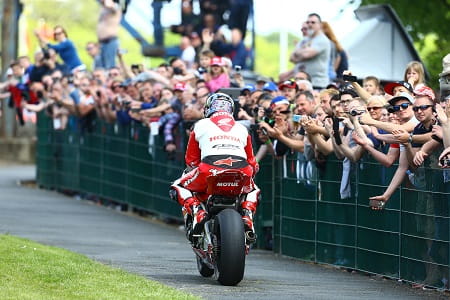 ! The wrist is playing a part in it but I have got to say that I don’t think my wrist is as bad as my result so I’ve got to tidy the job up a bit and do a little bit better.”

The Honda Racing rider endured a tough time of it at the North West 200 too, but says he thought it might be a bit easier on the wrist at the TT with it being a little different to the stop-start nature of the North West course.

“The North West stands out on its own, you’re going 200mph then to nothing around eight times in a lap and it’s so intense and with the mass start it’s tough. Here it’s more flowing and a ten-second interval start so in areas it’s not as tiring but it is still pretty hard. The best therapy is riding a motorbike but probably ten minutes at a time, not an hour and forty five! It’s been difficult but I’m trying to enjoy it.

“We are struggling at Quarterbridge, Bradden Bridge, Ballacraine, Kirk Michael, Ballaugh Bridge, Sulby bridge, Parliament square – places where you are coming down from massive speeds to nothing is really hard on the wrist but it’s everywhere really. If there are over 250 corners on a track and you’re a tenth behind on every corner then 250 tenths adds up to a lot of time so you’re always one step behind the ball.”

As the ‘pint glass half full’ kind of guy he is, McGuinness refuses to just draw on the negatives of his TT so far, reminding us that when the accident happened he’d been told that he wouldn’t even be racing the TT this year.

“To take the positives out of it, eleven weeks ago I was laid on a pile of boulders snapped into three pieces and when the surgeon had a look at my injuries he saidsaid you’ve got no chance of being at the TT so to even be on the start line I’m winning!

We’re starting off at number one so it’s good for the sponsors and everyone else but I’ve had a good run, you can’t win them all.”

McGuinness is widely thought to favour the Senior TT and this has led to many a rumour that the Morecamble Missile is holding himself back for the blue riband event on Friday, but he says this is simply not true and that with him, what you see is what you get. 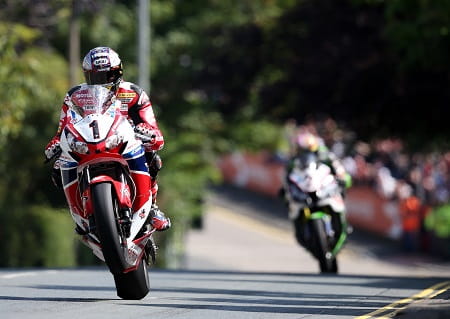 “I’ve heard all sorts of tales about sandbagging and that but it’s not rocket science; people know how John McGuinness works. If I’m on form I’ll be running near the front, I won’t say I’d be winning races but I’d be a lot more competitive than I am at the moment! My last race here was a win and it was 1 hour 45 minutes 20, which was 26 seconds faster than Saturday’s superbike race so there’s no sandbagging or holding back, when I’m riding around I’m in pain and it’s difficult and I’ve still got four races to go so there’s still more pain to come! It might get easier, I don’t know. I might get a bit more confidence and be a bit closer to the front on Friday but it’s probably fair to say I’m going to struggle.”

Acknowledging this, McGuinness says he’s accepted that he won’t be winning anything at this year’s TT with the possible exception of Wednesday’s TT Zero race. Riding the Mugen Shinden San, McGuinness qualified for the race with a fastest average lap speed of 115mph.

“I might have half a chance on the electric bike. I did a strong lap on it last night, I caught Bruce up but Bruce is weird. You don’t know what you’re going to get from him at all. He’s got massive corner speed and that’s what these bikes are best at, running loads of corner speeds. It’ll be a tight race! It’s the only bike that doesn’t vibrate, wheelie and knock me about whereas everything else is on the back wheel etc.

“The throttle on the electric bike is really light whereas the throttles on the other bikes can be quite hard to turn. The electric bike is a pleasure to ride so it’d be nice to win it but if I get humped by Bruce in the race you’ll probably find me in the Irish Sea drowning my sorrows.

The best man will win on the day, but Bruce will take some stopping.”

McGuinness is a big supporter of the electric bike racing scene and says he’s proud of what has been achieved in the industry over the last three years.

“I’m dead proud of the electric stuff; in fifty years’ time when I’m dead people will open up a magazine and be like ‘look at that, the pioneers of electric bike racing’. To go from 102mph, to 109mph to 115mph laps is insane. The leaps they are making are unreal. It’s something I’d look to continue even after retiring.”

McGuinness will sit out of Wednesday’s Supersport TT to rest ahead of the Senior race, but will still participate in the electric race.