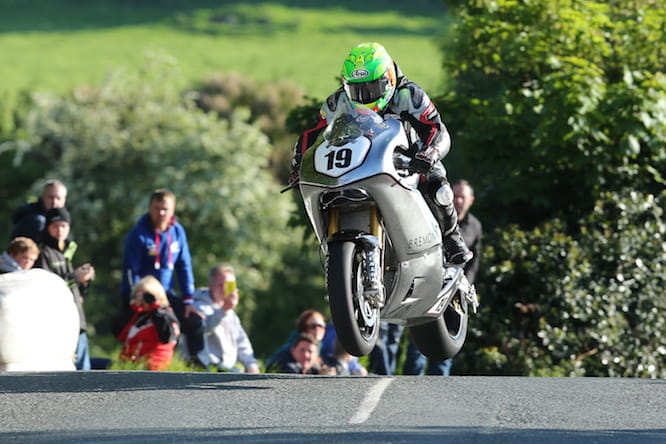 Things could be looking up for Norton Factory Racing ahead of the 2016 Isle of Man TT after a major breakthrough with electronics appears to have made all the difference with their Aprilia V4-powered contender.

Just weeks after Cameron Donald ditched the team, slamming them for a lack of pace in developing the bike, Norton’s new Aussie star Dave Johnson has claimed progress made with the latest rendition of the SG TT racer eradicates what Donald described as the bike’s biggest issue.

Running what are former Aprilia MotoGP CRT engines, the bike was never short on power but with the team unable to perfect the throttle connection, the delivery of that power was inconsistent making the bike overly aggressive.

However, after a switch to Aprilia’s Magnetti Marelli kit electronics and some major breakthroughs during the winter, Johnson reckons they’ve finally got it under control.

Before signing with the team, Johnson rode the SG4 last year and after just a handful of laps at Jurby last week while on the Island for the TT’s press launch, he was beaming with positivity.

“I had a quick ride out on the bike on Thursday and then did a bit more on Friday,” Johnson told Bike Social. “It’s changed a lot from the bike I rode last year, it’s actually a rideable machine now!

“The throttle delivery is so much better. It’s got so much power, last year it was just too savage on the throttle and that was the big problem. It was hard for Cam to do one lap let alone six but now I think we can just keep riding. Throughout the test I could manage the power as the throttle connection was really good.

“We’ve got a completely different electronics package this year with the Magnetti Marelli Aprilia kit stuff, and that’s where a lot of the difference has come. At Jurby the throttle was much better over the bumps whereas last year’s bike was so hard to ride mid-corner, as soon as you tapped the throttle it just wanted to tie itself in knots but this year it felt much smoother. We’ve got a lot of different maps I can use too and one of the guys went to Italy for some training on how to work with this stuff.

“We’ve still got a long way to go and everything could change when we set off down Bray Hill but it’s already a much better motorbike than it was last year.” 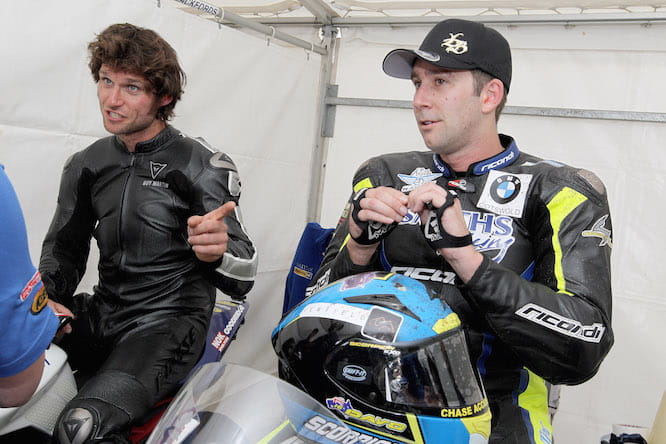 Having been sunning it in his native Australia through the winter, only flying to the UK two days before last week’s test, Steve Plater has been resuming his testing responsibilities with the Castle Donington factory.

Last week marked Plater’s first time out on the SG5, but having ridden the SG4 just a few weeks before he told us the bikes were worlds apart and that he’d be happy to head down Bray Hill on the bike he’d just spent the day testing.

“The bike has taken a massive step forward compared to last year,” said the former TT winner. “There’s so much that has changed. Almost everything has at least been tweaked but it’s the electronics making the biggest difference. I rode the SG4 at Jurby a few weeks ago and there was so much that needed doing but the latest bike solves a lot of those issues. It’s the first time I’ve ridden it, come back to the garage and told the boys ‘right, we’re ready for the TT course now!”

A multiple top ten TT finisher, Johnson says it was the Norton’s outright speed that attracted him to the project, but remains under no illusions about the task ahead.

“When I saw how fast the bike was I immediately wanted to know more. Last year I was on a BMW that had 220bhp and was hardly slow, but when I pulled out of the slip steam on the Cronk v Voddy straight Cam just took off. It’s a seriously quick bike and that’s why I started talking to them.

“They were honest with me and said there were a few electronic problems and when I rode the bike for the first time I could see that there were, but they said they’d fix it and it looks like they have. It’s completely transformed the bike. I’ll not hold my breath just yet but I think we could go OK.”

Despite the massive step forward, the Norton project still has a long way to go. Finishing ninth in last year’s Senior TT, Johnson’s fastest lap was a whopping 131.5mph.

“You have to do over 131mph if you’re gonna be in the top ten now and I don’t think I can say the bike is capable of 130mph or more just yet, but I don’t think it’s going to be far away. A top ten would be like a win for Norton.”