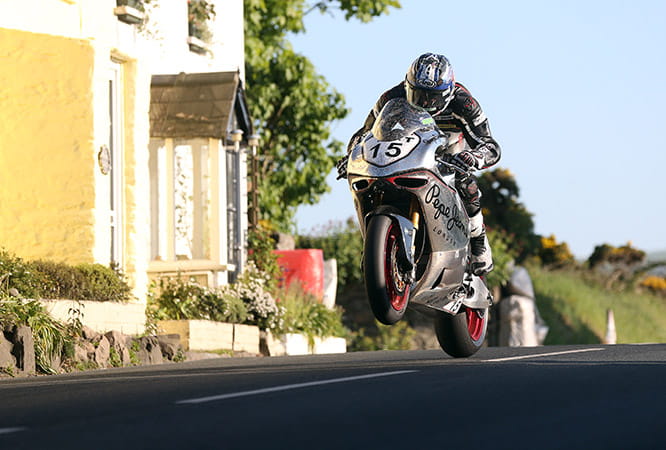 Australian ace David Johnson created a little bit of history, albeit unofficially, during Thursday evening's practice session at the Isle of Man TT Races when he not only recorded the best ever lap by a Norton, but also the fastest ever lap seen by a British machine around the mountain course.

After teething troubles during earlier sessions, Johnson put in two laps in excess of 127mph before saving the best until last with a lap of 128.323mph third time around. He was also fastest through the start and finish speed trap, while also being recorded through the Sulby Straight speed trap at 193mph.

His lap time topped the previous best Norton lap of 124.681mph, set by fellow Australian Cameron Donald during the 2015 TT, and also the fastest ever lap by a British machine. That was set by Guy Martin in last year's Supersport race with a speed of 126.823mph on the Smiths Racing Triumph Daytona 675.

"Last night felt really good and to get four untroubled laps was awesome," Johnson said afterwards. "We've had a few small electrical problems so far which have held us back a bit but the boys got to the bottom of that and we got some good laps on - going down Bray Hill flat out felt pretty exciting for sure!

"The bike didn't miss a beat last night and my ideal lap time, putting all my best sectors together, would have put me in the 129s so we're not far away. Finishing inside the top ten is the ultimate goal, that would be like a win for the team and for Norton.

"The bike's stability is excellent and I've never ridden a more stable bike whilst through the slow corners and the fast corners it's really good. We're clearly not lacking top speed so we just need to improve through the medium, third gear corners and we should be set for a couple of good races."