Johnson and Rutter on Triumph's at TT! 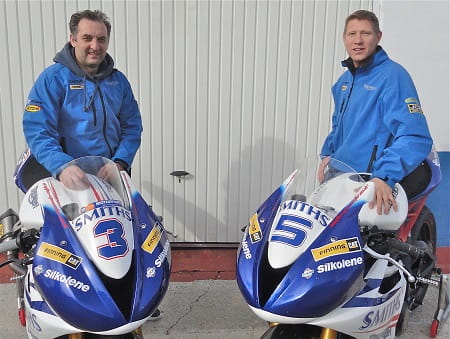 TT winners Gary Johnson and Michael Rutter will line-up for the Supersport TT on Smiths Triumph Daytona 675's this year!

Triumph may not be officially-backing the team but they have come out with a superstar line-up that could see the race-winning take victory in the Monster Energy Supersport race.

With Michael Dunlop on a BMW Superbike in the big bike races, Ian Hutchinson back at the TT on a Yamaha, Norton signing Donald, and now Triumph back too, this year's TT is set to be the most exciting for years.

It was back in 2003 that Triumph last won a TT race with Bruce Anstey on the Valmoto Triumph Daytona and the British manufacturer is keen to see that trophy brought back to Hinckley.

Johnson, who raced the MV Agusta F3 last year, has already tasted success in the Supersport category at the TT, having won the second race in 2011. He looked set to do the same in 2012 but ran out of fuel on the final lap of the Supersport 1 race.

For Rutter it's the first time he has competed in the Supersport class since 2009, but he too has been victorious in the past, winning the 1998 race after getting the better of team-mate Ian Simpson by just 4.7s. He will also ride a BMW for Bathams BMW in British Superbikes and the Senior and Superbike TT.

The Smiths Triumph team, run by father and daughter duo Alan and Rebecca Smith, forms a part of the Gloucester-based waset management and construction firm.

Smiths Triumph Team Manager, Rebecca Smith said: "As a team we've often discussed the Isle of Man TT Races but only wanted to do it with everything in place. We are really looking forward to taking the iconic Triumph brand back to the Isle of Man and with Michael and Gary riding for us we are confident that we will be competitive."

Commenting on the appearance of the team at the 2014 TT, the Isle of Man TT's Paul Phillips said: "The welcome appearance of another high profile, successful team from the British Championship gives the TT its strongest line up for many years.  This year also represents one of the strongest in living memory in terms of manufacturer representation with another credible marque added to the list of potential race winners."

He continued: "Smiths have made a major commitment to the TT and by backing these experienced riders have a great chance of at least a podium place or even a race win."