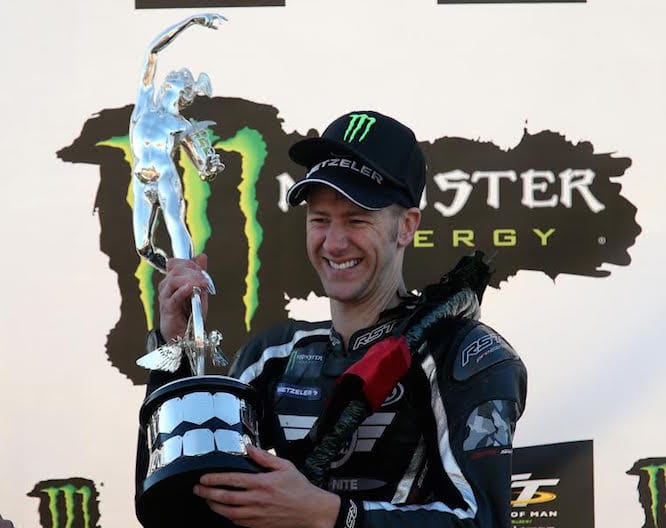 Ian Hutchinson took an emotional victory in this evening’s Monster Energy Supersport TT, returning to the top step for the first time since shattering his leg twice in 2010/11.

The last time the Bingley Bullet stood on the podium was at the end of his five-in-a-week run in 2010, so emotions were running high as the Team Traction Control Yamaha man entered the winners’ enclosure.

“I owe one to Yamaha, they’ve been behind me all these years I’ve been trying to come back and although we haven’t had the greatest run, I rode in 2012 and wasn’t capable of any results but they came here and stood behind me and again last year, we had our problems but they were behind me through everything” said the now nine times TT winner.

It’s been a dramatic week for Hutchinson, who was set to ride the Tsingtao MV Agusta at this year’s races but a last minute withdrawal from the team saw him left without a ride until The Prodigy’s Keith Flint stepped in to run a Yamaha R6 in the Team Traction Control outfit.

“This bike has come together last minute, I was supposed to be riding the MV Agusta but there was no way it would have been ready in time. I know how much Keith Flint loves the Isle of Man TT and Grant and Chris Anderson who I’ve worked with in the team, so a week before the TT I asked them to come out and they pulled it together. They came over on Monday night, bike came Tuesday, we’ve done three laps of practice and won the TT!”

Despite many writing him off, Hutchinson’s determination to win again was unbeatable as he entered the 2015 TT. He just missed out after a strong fight in Sunday’s superbike race but he didn’t have to wait long, making his return to the top step 24 hours later.

“I’ve had so many people who have put a lot of work in to saving my leg and if I sit and think about it it’s unbelievable how many individuals I’ve got to thank.

“You never think at the TT but when I had seven seconds at the TT I thought I’d have to really cock it up to lose this! I tried not to get any silly things in my mind but I was thinking about all kinds of stupid things across the mountain, the bike has been a real joy to ride, the superbike is a proper handful and you have to remain concentrated on those but you can take it in more on a 600. I gave a few of the fans a wave coming out of the Cregg as they were bouncing up and down!