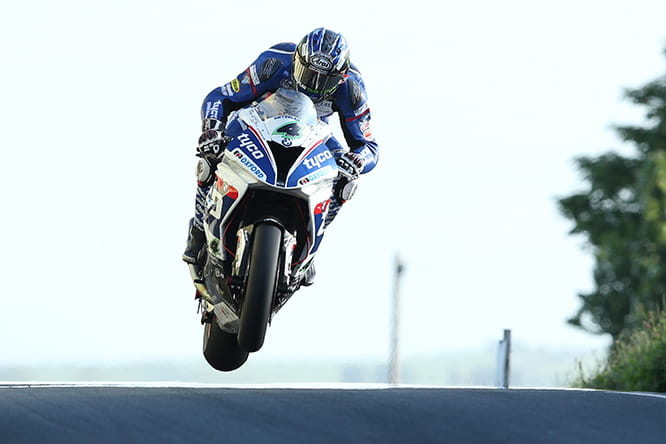 Having come oh-so-close on Monday evening, Ian Hutchinson set the first 130mph+ lap at the 2016 Isle of Man TT races with the Tyco BMW rider tearing round the Mountain Course at 130.626mph in last night's practice session.

The island was again bathed in glorious weather and having lapped at 129.120mph first time around, the Bingley Bullet immediately switched to his superstock-mount, where he was also fastest, before putting in two more laps on his superbike. The first one was 129.5mph but he saved the best until last with the aforementioned 130mph lap.

That put him a full mph quicker than second placed John McGuinness, whose second lap of 129.618mph briefly sent him to the top of the leaderboard. However, the Honda Racing rider wasn’t overly happy with the lap, admitting he’d been trying too hard.

“The lap felt like 135mph but sometimes you can try too hard, which is what I think happened,” he said afterwards. “I was trying to force it and make it happen but that’s not really the right approach around here. It felt better than a 129.6 but the bike was a bit soft and was wheelying a lot everywhere so I was having to keep rolling off. There’s work to do with the bike but we’ll get there.”

However, the Kiwi had set impressive sector times for the majority of the lap and looked like he’d be the first to post a 130mph but he lost a lot of time on the run down the mountain so only time will tell if there was an issue or if the wily veteran had deliberately backed off.

It wasn’t a great night for the Dunlop brothers with William only making it to Quaterbridge before pulling off the course on his Yamaha YZF-R1. Younger sibling Michael, meanwhile, got to Sarah’s Cottage before the gremlins struck and although he made it back to the paddock, it wasn’t until 7.30pm and that only left him time to manage two laps on the supersport Yamaha R6.

Anstey topped the 600cc class with a speed of 124.508mph with Harrison the only other rider to get into the 124s although the majority of riders only squeezed in two laps on the middleweight machines.

The session also saw the Lightweight bikes back in action and it was last year’s race winner Ivan Lintin who topped the timesheets at exactly 118mph. That put him over thirty seconds clear of second quickest Martin Jessopp, the Yeovil rider lapping at 114.871mph which put him just ahead of Stefano Bonetti and 2013 winner James Hillier.