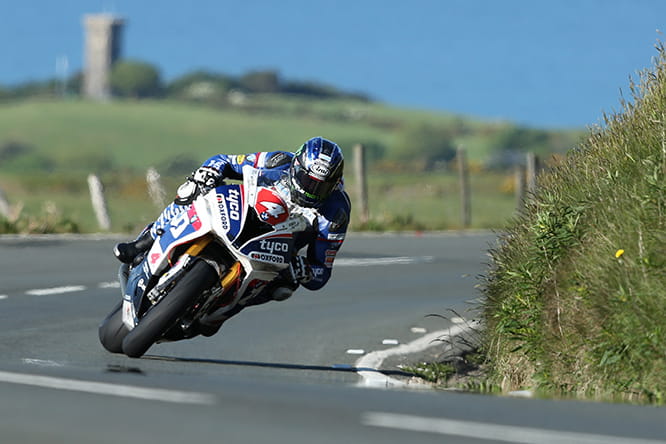 For the second night in a row, lap records were obliterated in practice for this year’s Isle of Man TT races and, in what was the fastest session ever witnessed around the Mountain Course, both Ian Hutchinson and Michael Dunlop lapped inside John McGuinness’ outright lap record.

Riding his Tyco BMW superstock machine (pictured above), Hutchinson signalled his intentions from the off grabbing the lead on the road straight away to post a standing start lap of 131.632mph but second time around he went comfortably quicker, his eventual speed being a sensational 132.803mph, 0.786s quicker than McGuinness' best in last year’s senior race.

Dunlop started out on his superbike and recorded a lap of 132.754mph, which was only 0.375s slower than Hutchinson and also quicker than McGuinness’ mark of 132.701mph. He then returned to the fray on his superstock BMW to lap at 131.879mph.

They were the only two riders to break the 130mph barrier on the night, although Dean Harrison came mightily close at 129.996mph. He was third on the night ahead of Michael Rutter, Conor Cummins and John McGuinness who were the only other riders to lap at more than 129mph. Hutchinson’s only problems on the night came when he took his supersport bike out, with the CAME Yamaha YZF-R6 stopping at the Gooseneck.

David Johnson set a new fastest lap on the Norton with his opening lap being 128.533mph, while he was also fastest through the speed trap at 194.5mph. Harrison meanwhile, was flying on his 600, lapping at 126.249mph to go to the top of that particular leaderboard.

After his crash at Keppel Gate on Thursday evening, Bruce Anstey was back in action – minus his lengthy beard – and put in two laps on the Padgett's Honda RC213V-S, the quickest being 127.252mph.

“I don’t feel too bad,” said the Kiwi afterwards. “I’m a bit stiff and sore and bashed my ankle which I hurt at the North West 200 but am ready to go. The Fireblade wasn’t too badly damaged but we took the RCV out tonight as we had a few things to try. As for the beard, I left that in the ditch up on the mountain!”