How to build a TT bike from the ground up

The Isle of Man TT course is a gruelling, 37.73 mile long test of both man and machine – probably one of the most physically demanding circuits in the world. There are tight and twisty sections, fast and flowing sections, tight hairpins, jumps, bumpy sections, smooth sections and more. Teams competing in the TT face the monumental challenge of setting up a bike to deal with all of that at average speeds of up to 132mph and more.

One British factory, Norton, decided to take this a few steps further. Three years ago, Stuart Garner, CEO of Norton, decided that they would build a prototype machine for the Isle of Man TT, something pretty much unheard of in this day and age. How on earth do you build a motorcycle to take on the TT from scratch? We sat down for a chat with Garner and the brains behind the bike, Simon Skinner to at least try to understand. 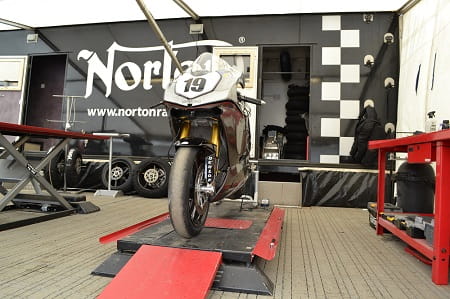 “Building a TT bike from scratch is quite unheard of these days with everything production based Japanese, German or Italian motorcycles” Skinner explained to Bike Social.

“It’s quite a unique proposition and it’s quite a difficult thing for people to get their head around. There are a huge amount of advantages to building your own bike, we can do a TT specific geometry for example, but there are also a huge amount of disadvantages, as you’ve got nothing to start with so we have to maximise the advantages which is what we’ve been doing with SG3. 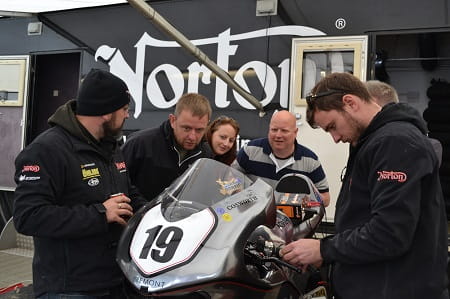 “The SG3 is a full factory TT race bike with no constraints or preconceived ideas. There are just four guys working on the bike and we are completely open minded to what we want to do and that’s win the TT.”

Norton first returned to the TT back in 2012 with a bike they named the SG1. Last year they took the SG2, which achieved a 122mph lap and this year they are taking on the mountain course with the brand new SG3.

“The bike has gone through so much development over the years. Each year we go to the TT we come back having learned a load of lessons and ultimately we want a bike that works at the TT only. We started off with a standard Aprilia motor whereas this year there are only one or two standard parts left, everything else has either been incredibly ‘Nortonised’ or designed in house – such as the motor, new air box induction system and brand new chassis. The electronics package is also developed in-house by Cosworth.”

As Skinner mentions, the Norton SG3 is powered by an Aprilia RSV4 engine. However, what many people don’t realise is that there isn’t much ‘Aprilia’ left. 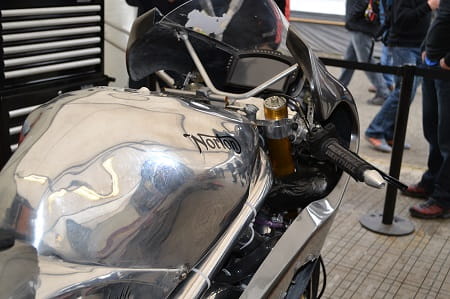 “The only thing Aprilia is a gearbox and a crankshaft. Everything else is Norton’s: heads; pistons, camshafts and even cases, everything is our own now. We always wanted a V4 motor from day one as a development of the Commando. What would be next for Norton, a V4 was always up there. It’s a good motor for chassis packaging – lots of power, good character. An inline four is too Japanese, a V-twin is a bit Ducati, a triple is very Triumph so where does it leave you? A V4 motor has always been put in high-end motorcycles, so it is always a top-end engine configuration just like you’d have a V12 in a car. A V4 motor suits us all the way over. A lot of people stay away from them because they are more expensive to produce but that doesn’t affect us because we’ll always go for the high end anyway.” 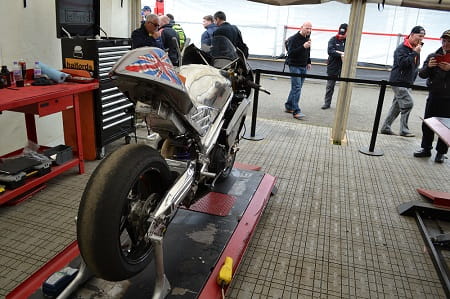 So how do you actually start the process of building a bike, from scratch to take on the TT?!

“From the start, you need to know what you want the bike to do first and foremost which is 200+ miles on a very tough circuit on which the bike spends a lot of time in the air, a lot of time fully compressed on the suspension, with some sections really fast and smooth like a race track. It has to work on a wide variety of surfaces and conditions. The average speeds are extremely high, 130mph average lap and knocking on the door of 200mph down the Sulby straight. What you need to do is have a bike that is very stable but turns well at high speed; those are your constraints.

“We can build in a huge amount of adjustability in our geometry; adjustable swing arm pivot, headstock angle, fork offset and production based racers have none of these things.” 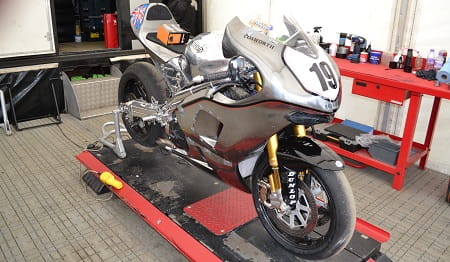 As Skinner explains, building a bike specifically for the Isle of Man TT has both advantages and disadvantages. This is something Stuart Garner is also keen to point out. He explains the difference between building a bike from scratch and modifying a mass-production Superbike in terms of property:

“You can’t imagine the difference between building a bike from scratch for the TT and taking a Superbike and developing it into a TT bike” said Garner. “If you put it in terms of property, we’ve built a brand new detached house from a green field, through to the foundations, the bricks, the plastering, the electrician, the plumbing, the decorating and then handed the keys over to the new owner with a landscaped garden. The other teams have more renovated an existing property and those are the kind of differences. We have absolutely built this motorcycle from the ground up, the chassis started life at the end of last year’s TT on Skinner’s computer, where we CAD-modelled what we wanted from a chassis and the motorcycle started its life there on a computer in the Norton factory. We’ve cut the tube, manufactured the tube here at Norton and built the bike literally from these tubes of metal.

“We are proud we’ve made the bike but it is very chalk and cheese to compare us from any other team out there. I don’t think there is another solely made TT bike at the TT. There are some great advantages to that as you can build what you want but there are also great disadvantages to that as you are taking on the likes of Honda with their tried and tested formula so you don’t know what is going to happen because the bike is brand new.”

OK, so that’s how you build a TT bike but how much does it cost?

“It’s not a cheap project” Skinner explains, “It’s deep into six figures per bike but that’s what you’ve got to do to win. I think that other teams will probably spend more money than we do just modifying a factory superbike, so we are very good at watching the pennies but that comes from the team growing up in a production background where cost is important. We make as much stuff as we can in-house including the frame, the swing arm, the rear frame, the bodywork, the sub-frames, wiring harness, engine build, it’s all done in house at Norton.”

For 2014, the Norton factory team has brought in some major TT experience to progress the project. Former works Norton rider, Mick Grant has been brought in to manage the team while two time TT winner Steve Plater took part in the SG3’s development programme. What’s more is the team have signed Aussie-ace, Cameron Donald to ride the thing. Donald’s fastest lap so far this year has been 123mph, the fastest a Norton motorcycle has ever been round the course but the Aussie feels there is more to give. He was unfortunately forced to retire from the Superbike TT, but is feeling confident for tomorrow’s Senior TT.