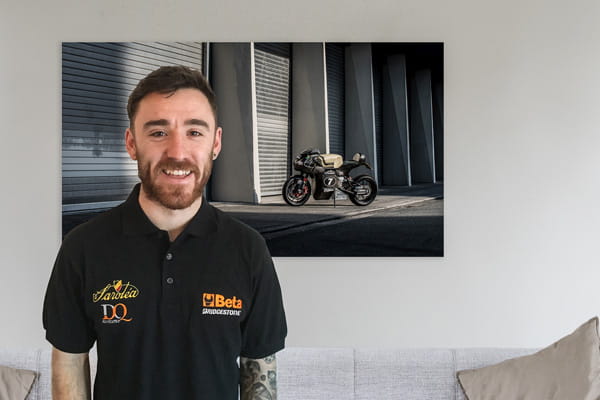 Belgian electric bike manufacturer Sarolea has announced a crack line up for the 2016 TT Zero race, with former Bennetts Lightweight TT winner Dean Harrison joining the ever popular Ulsterman Lee Johnston (above) in a two-man squad.

It will be Sarolea’s third year at Mona’s Island and represents a step up in ambition for the team which is known for its distinctive and beautiful carbon fibre machines. Debuting with Scotsman Robert Wilson in 2014, the Belgians finished fourth with an average speed of 93.507mph. The team improved to do a 106.51mph lap in last year’s event, coming home fifth and ‘best of the rest’ behind the big budget efforts from Mugen and Victory.

With TT Zero lap speeds and technological advancements evolving at an unprecedented rate, it will be interesting to see just how quick the competitors go in 2016.

Johnston, who rode the Victory to third behind the Mugens of John McGuinness and Bruce Anstey, said: “I’m buzzing to be on-board with Sarolea. I raced last year for a different team and finished on the podium. This year the plan is to podium again but (to go) faster!”

Bradford ace Harrison is entering his sixth season at the TT but his first on an electric bike. He added: “I’s my first time racing the TT Zero and I cannot wait. I’ve been following the team since they raced for the first time in 2014 and I’m itching to get on the bike. The technology is off the scale and this year is going to be flat out.”