Guy Martin to race TT zero: "It's the future!" 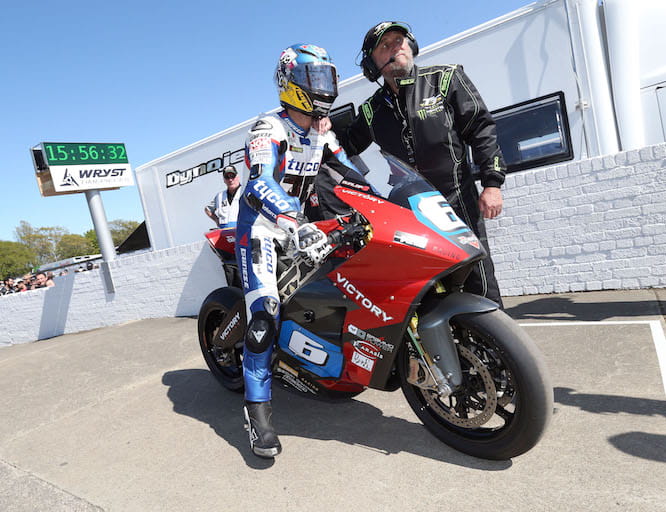 Guy Martin made his electric TT debut this afternoon as he stepped in last minute to replace injured Tyco BMW teammate William Dunlop on the Victory Racing TT Zero bike.

Dunlop fell at Laurel Bank in this morning’s Superstock/Supersport practice lap and has since been airlifted to Nobles for scans, with reports suggesting he’s suffered a number of cracked ribs.

With the second TT Zero qualifying setting off at 15:45 this afternoon, fans’ favourite Martin jumped on the bike in place of Dunlop and set off down Glencrutchery Road.

“It’s fast!” said Martin as he returned to parc ferme after lapping the mountain course at 104mph. “It’s different. There are no gears, it just goes and keeps going and going! It’s the weirdest, strangest thing. It’s the future isn’t it?”

“You get a bit of wind noise but it’s also how noisy the brakes are, they are the same brakes as on my superbike but you don’t hear it! It handles a treat, it’s so impressive. It’s strange, it’s not that it’s wrong it’s just that I’m not used to it, it’s the strangest thing. It’s coming! It’s happening!”

While no official announcement has been made, it is expected Martin will take part in Wednesday’s one lap race in place of Dunlop, who will miss tonight’s Supersport race and tomorrow’s Superstock battle.

Dunlop and Victory teammate Lee Johnston lapped the course at over 100mph in the bike’s first ever session on Friday. The second electric bike practice was postponed until today after schedule changes across the weekend.

The SES TT Zero race will take place on Wednesday at 10:45.