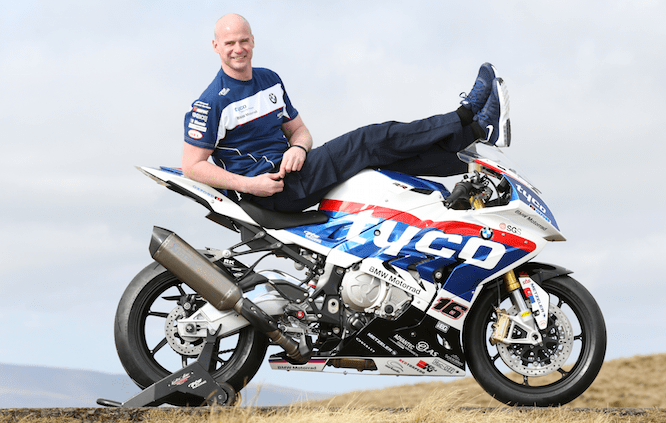 Ryan Farquhar will campaign the second TAS Racing Tyco BMW S1000RR at this year’s Isle of man TT following Guy Martin’s decision to sit out from road racing this season.

TT star turned TV presenter, Martin is missing this year’s major international road races as he prepares for a gargantuan mountain bike challenge, the Tour Divide, in America, taking place as the TT draws to a close.

Farquhar, a three-time TT winner, had approached the TAS team about support for his privately-run BMW S1000RR but with Martin’s decision to sit out, an arrangement was made for the Northern Irishman to ride the team’s spare S1000RR superbike alongside Ian Hutchinson.

“Having purchased a superstock BMW with support from TAS for this season, I got chatting to Philip Neill and from there the superbike ride came about,” explained the 13-time TT podium finisher.

“I never thought at this stage of my career I was going to get the chance to ride a competitive superbike at the TT again. So to be riding for Tyco BMW with full support from BMW Motorrad and a great team of people around me is a great opportunity.”

Tyco BMW team boss Philip Neill added: “With Ryan’s talent, experience and ability; not to mention his technical knowledge, he will be an asset to us on the Tyco BMW superbike. Taking all of that into consideration made it an easy decision to include him in our plans.

“Barring one or two years in the past 15, we’ve always represented a manufacturer in an official capacity at the TT with a two rider team. This year we were tempted to run just with Ian [Hutchinson] after Guy decided to sit it out, but there was always a desire, should a suitable rider come along, to have two riders on Tyco BMWs at the June event.”