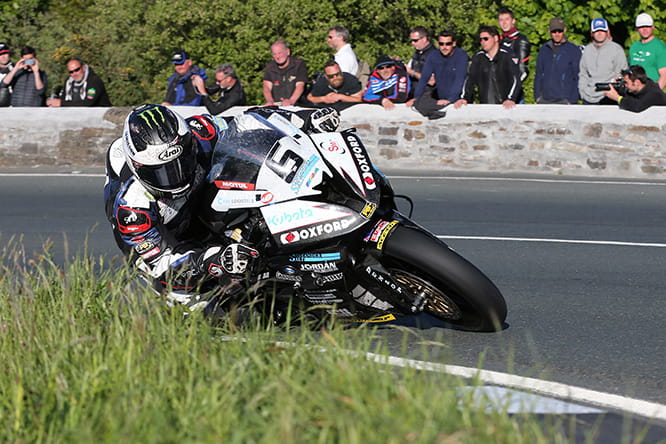 Michael Dunlop set the Isle of Man alight on Thursday evening with the first 132mph+ lap of practice week in the Superbike class, as well as lapping inside the lap record in the Superstock clas.

The Ulsterman lapped at 132.36mph on his second lap on the Hawk Racing BMW and also made the headlines in the Superstock class too, with a speed of 131.34mph, which was inside his own class lap record of 131.220mph.

However, there was drama for one of the pre-event favourites Bruce Anstey who crashed his Honda Fireblade at Keppel Gate, the Kiwi reported to be up on his feet but suffering with an ankle injury.

It was an idyllic evening once more on the island and first to complete a lap were Steve Mercer and Ivan Lintin,  but Ian Hutchinson was flying and despite it being a standing start, he lapped at a superb 131.66mph. That made him the only rider above 130mph, although Dean Harrison was close at 129.97mph.

Second time around and Hutchinson looked like he was going quicker still only for his pace to fall away slightly in the closing stages with a lap of 113.11mph. John McGuinness was equally rapid and he registered his fastest lap of the week, 131.12mph to become the third fastest rider of the week.

“There’s a bit more to come, for sure,” said McGuinness afterwards. “We fitted a new engine in today and made a few tweaks so my first lap was steady away at 127mph but I had a bit of a go second time around and a a 131mph lap puts me in the ballpark.”

It was Dunlop who was making all the headlines though and after a steady opening lap, he turned up the wick second time around his Superstock to post 131.34mph. He then switched to his Superbike and having lapped first time out at 130.88mph, he improved second time around to record the first 132mph lap of the week.

Another man to enjoy a good night was Australian David Johnson on the Norton. He had three trouble-free laps, all in excess of 127mph with his best being an impressive 128.32mph, comfortably quicker than the bike’s previous best of 124.68mph.