Star of the 2013 Isle of Man TT, with four race wins, Michael Dunlop, has confirmed a sensational last-minute switch back to Dunlop tyres ahead of the 2014 TT, less than 48 hours before the first Superbike race.

The decision was made this afternoon ahead of the penultimate practice session this evening. 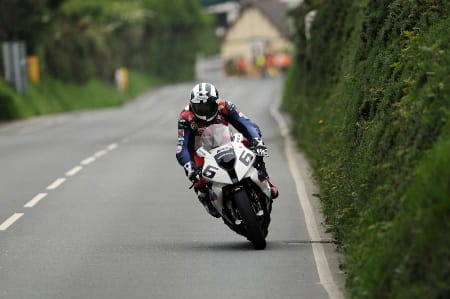 During practice week, Michael Dunlop, 25, has been running Metzeler tyres on his factory BMW S1000RR and has managed a 129.032mph lap during Tuesday evening's session on his Superbike, putting him in 4th position. Perhaps this wasn't good enough for the man from Ballymoney whose last minute decision could make the difference between standing on the top step or coming home as the first loser.

On the Superstock machine during practice, the younger of the Dunlop brothers, came home in 2nd place having registered a lap of 125.840mph. And finally, on the Supersport bike, Dunlop clocked a 122.258mph lap, good enough for 8th place.

Dunlop will ride his Dunlop-shod BMW in both the Superbike and Senior races, plus a BMW Superstock, a Honda Supersport machine and a Kawasaki supertwin during the TT this year. All bikes will be equipped with Dunlop tyres.

Michael Dunlop has already stated his intention to win a record-breaking 6 TT's in a week and to conquer a 130mph lap on his Supersport bike.

It's not a secret that the Dunlop tyres suit the 37.73 mile Mountain Course, a fact backed by Dunlop-shod riders filling 14 out of 15 podium places at the 2013 TT.