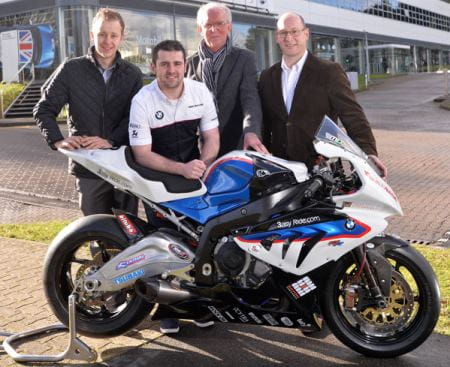 It’s been confirmed that seven-time TT winner, Michael Dunlop will ride for BMW Motorrad at this year’s Isle of Man TT.

As we reported last week, the Ballymoney man will join forces with Hawk Racing and BMW Motorrad UK to compete in both the Superbike and Superstock TT races aboard BMW machinery with support from BMW Motorrad via its global racing programme.

Despite winning four races at the 2013 TT, Dunlop had announced he’d be taking a year out of racing after being unable to reach a deal to renew his contract with Honda Racing. Rumours the twenty-four year old had changed his mind surfaced when he confirmed he was looking to test a bike in a speech at the Adelaide Motorcycle awards.

Bike Social sources suggest the S1000RR Dunlop will campaign is an ex-WSBK spec machine, with the manufacturer having pulled out of the World Series this year. It’s expected Dunlop will test the bikes in Spain over the next few weeks.

“I’m really pleased to have signed for such a strong and competitive team. The BMW S 1000 RR certainly has the speed for the TT and, with my experience, the support from BMW Motorrad Motorsport and Hawk Racing, I know we have a race-winning package.” Dunlop said on the deal.

“I really thought about sitting out this year, but I have found a team that I am really comfortable with and the support from BMW Motorrad Motorsport will make us a force to be reckoned with this year.”

2014 marks seventy-five years since BMW’s first ever TT victory, as Georg Meier became the first ever foreigner to win the Senior TT in 1939 on his Boxer-powered 500cc RS 255 Kompressor.

Dunlop is also set to participate in a number of other international road races with the team plus a couple of appearances alongside James Westmoreland and Ryuichi Kiyonari on the Buildbase BMW in the British Superbike series.