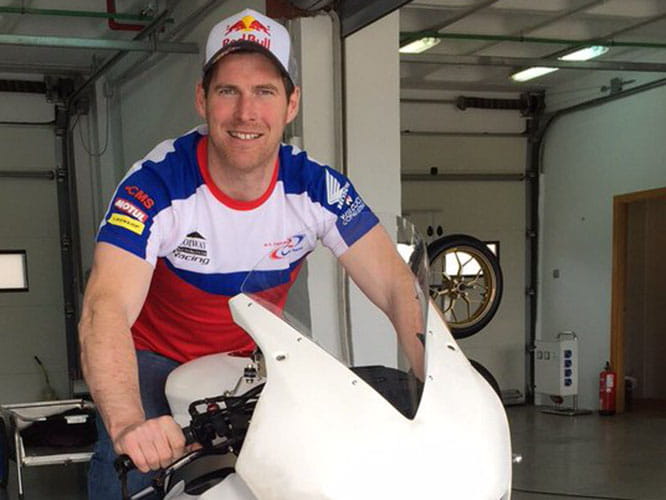 Multiple world enduro champion David Knight looks set to take a step closer to his dream of competing at the Isle of Man TT after announcing that he is to test with Jackson Racing, the squad that runs John McGuinness and Conor Cummins in world endurance and on the roads.

The 36-year-old Manxman, world champ in the big bike E3 enduro series in 2005, 2006 and 2010, has often spoken about his love of the TT and a desire to race there. He has been a regular at the Ron Haslam Race School over the years and is currently testing with Honda squad Jackson Racing at Monteblanco in Spain, with a view to acting as a reserve rider in one of the three world endurance rounds taking place this year. With the Portimao round of the series now clashing with the TT, it looks like there is a good chance that Knighter could make his Tarmac debut as soon as June.

“I am certainly looking forward to meeting up with the team in Spain this week and getting some laps on the bike,” said Knight. “Obviously working alongside Alan and the boys from Jackson Racing is a great opportunity. It is a very strong line-up with John, Conor and Steve (Mercer), so maybe I can assist them across the season in EWC. We still don’t know how things will turn out with the schedule change for the Portimao round, but I would like to think that I could be available to stand in for one of the riders if there is a clash with other events such as the Isle of Man TT.”

Speaking of his decision to work with Knight, team boss Alan Jackson added: “This is a great opportunity for Jackson Racing and to have a rider of David’s ability and experience within the team brings immense value. He will be testing the bikes at the session in Monteblanco and we will discuss further options across the season in world endurance. With recent changes in the race schedule and most notably the round at Portimao being moved, there is a potential clash for both Conor and John. So David may very well stand in for one of the riders, but we will discuss these options further over the coming few days.”

While it is too early to know exactly how Knight’s adaptation to road racing will go, Bike Social would wager a few quid that there’s every chance we could see the proud Manxman line up at the TT in the next few years.