Cameron Donald: "I was never going to retire!" 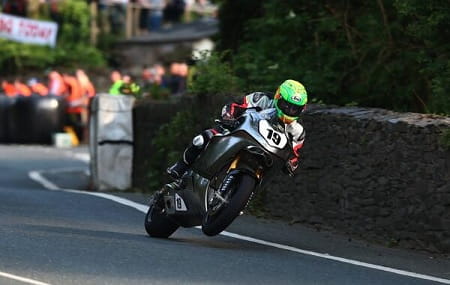 Two-times Isle of Man TT race winner, Cameron Donald has said retirement was never an option for this year’s TT and he’s feeling as fit as he’s ever been. Various outlets had reported that the Aussie was considering hanging his leathers up after the announcement that he and his fiancee, Kaz, would be starting a family although Donald has told Bike Social that retiring was never his intention.

Donald, whose fiancee gave birth to their first baby just seven weeks ago, will line up at this year’s TT races for Stuart Garner’s Norton factory on the brand new, 200bhp SG3 and says he can’t wait to see how it goes in the races.

“I was never going to retire but I had intended to take a year out from the TT” explained Donald, speaking exclusively to Bike Social.

“We’ve just started a family, my fiance and I had our first child just six weeks ago so the intention was to sit the TT out and compete in races in Australia, New Zealand and I’m also doing the full Malaysian Superbike championship. The idea was to keep racing a lot and keep sharp but I didn’t think I’d be able to come back to the UK and do the TT because it requires months away.

“We’ve been able to work out a plan with Stuart [Garner] and the team here that Steve Plater could do the develop the bike and I could come over here late in the day to race the bike at the TT. It’s awesome for me to be able to be here, so we’ll see how it goes!”

Having spent his entire road-racing career riding Japanese inline fours, the Leicestershire-built Norton SG3 V4 machine is a little different to anything Donald has raced before but he says it was this challenge that led to him signing the deal with Norton.

“This year is a total adventure for me. It’s so different to what I’ve done before and that’s why I did it, because I wanted a change. Everyone at Norton is so motivated and excited it’s infectious. To be involved with the Norton brand racing at the Isle of Man TT, it’s the sort of things fairy-tales are made of.”

“We can’t get carried away with the fact that we’re here to do a very difficult job and the TT is the Everest of racing so to do that on a relatively new bike and team is a big ask but that’s why I came here: to take on that challenge.”

Before heading to the Isle of Man, Cameron underwent a couple of tests on UK race circuits to get used to the bike and iron out any niggles.

“The bike is good. As soon as I got on it I was impressed with the chassis. In testing we made heaps of changes so I could learn how the bike responds to change. In terms of the engine we worked a lot with the electronics, throttle connection and fuelling. The boys understand what needs to be done so it’s just been a case of getting out there and getting it done!”

Donald set a fastest lap of 114.353mph on his first outing with the SG3 on Monday night but upped the game massively on Tuesday with 120.8mph, which bodes pretty well considering the SG2’s fastest lap was just 122mph.

“I’m approaching this year like any other, I go to the TT and I’m continually trying to learn it because you never stop learning there. I’ll give it 100% and we’ll see where we end up at the end of the day because that’s where you end up. I never think much about what the competition is doing, I let them worry about themselves and I just worry about what I can do. I’m as fit as I’ve ever been and as prepared as I’ve ever been to race and the boys have done a good job with the bike. We didn’t really know what we were up against until these first few nights of practice. I’ve gone to the TT with Superbikes in the past and thought they weren’t going to work and they have and other bikes where I thought they would be perfect and things have gone wrong. We’ll know where abouts we are at the end of practice week when we can see how fast we’ve been.”